by Ty Weaver
in Bowhunting Posts
0 0
0 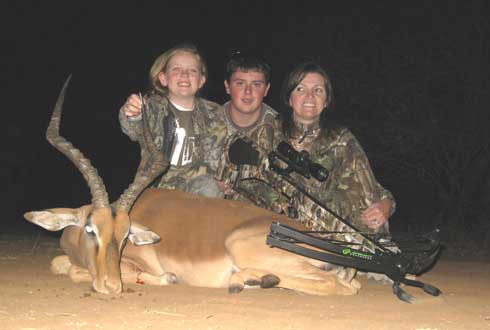 Lynzy, Mom and me with Lynzy's trophy Impala. I'm never getting that Barnett back now.

The Barnett crossbow arrived and in no time Dad and I were in the backyard sighting it in. Sighting in was a breeze. The accuracy of this crossbow is unbelievable. We were having a great time and them my little sister Lynzy showed up. She says, “I want to shoot it.” Now she does hunt a little. She mostly shoots her pink 22 rim-fire and a 22 Hornet but I’m thinking, “Please go play with something else.”

She insisted so Dad put a small balloon on the target, gave her a few instructions, she squeezed the trigger and POP the balloon was history. For a second I was excited for her and then I came to my senses and realized that my hunting with the Barnett was never going to happen! I looked at my Dad who was grinning from ear to ear and said, “Please don’t let her paint it pink!”

Lynzy shot several more balloons at various distances. All the hooping and hollering attracted the attention of my Mom. Mom decides that she wants to get in on the action. Well lefty Lori was just as accurate as righty Lynzy and even more excited. Now I knew for sure that there was no way I was ever going to touch the Quad 400. Actually to be quite honest I was very excited to see my sister and Mom so into the crossbow. Mom loves the outdoors but she does not like recoil. I knew this was going to be the bait that she takes hold of.

Mom ran back in to the house to get the video camera. Dad was messing around taping Lynzy and me shooting  at balloons from 20 to 60 yards. The video is on Bowtube. The Barnett shoots field points and broadheads to the same point of impact and you better only shoot one at each bulls-eye or you will be replacing fletching or damaging bolts. By the way if you happen to damage a bolt, DO NOT RE-USE IT!

The Barnett’s first trip to the field was in South Africa. My South Africa brother Hannes Els, owner and operator of Limcroma Safaris invited our whole family to his lodge. He specializes in bow hunting safaris and dedicates nearly 100,000 acres to bow hunting only. Once at camp we met up with my other South Africa brother and Professional Hunter, Johan LeRoux. Johan is an outstanding person and is great with kids. He was very excited to learn that Lynzy and my Mom would be hunting with the crossbow.

As soon as we unpacked our gear we took the Barnett to the target range to make sure everything was in order after the long trip. We all took a shot retrieving the arrow after each shot. All were bulls-eyes. Johan then says, “Can I take a shot?” Oh no I started getting flash-backs from day one. Sure enough Johan falls in love with the Barnett too!

After many shots and jabbering we were off to a huge blind at a waterhole and in no time critters were everywhere. A few monkeys came in and Johan looked at me with a big smile on his face and pointed at my Mom. I shook my head yes and Dad flipped on the camera. Johan set Mom up on the shooting sticks and she put the crosshairs on the biggest monkey. Just as she was ready to squeeze the trigger, the monkey moved. They played the monkey moving game for fifteen minutes and finally the bolt was on its way and monkey hair flew everywhere.

Mom was pumped, her first animal with the Barnett. We remained in the blind because Impala was next on the list. Just before sunset I spotted an Impala and Johan confirmed that it was a great ram. We all turned to look at Mom and she said, “My turn again?” She was up and ready in no time flat. The big ram walked right in to get a drink of water perfectly broadside. In my mind I kept saying, “Shoot Mom, shoot already.” Impala are quick drinkers and they do not hang around long. Mom squeezes the trigger and the ram jumps straight up in the air and bolts. The bolt passed through and as the Impala was running off I could see the blood flying. We all knew the ram would not go far and quickly exited the blind. We easily found and then followed a massive blood trail to a trophy ram. Mom was hooked! We celebrated and took some great pictures. That’s when my sister said, “My turn tomorrow!” I bit my lip……..

Everybody was excited for Mom when we returned to camp. She told the story many times, always with a big smile on her face. You can watch the video on www.bowtube.com. After a great Limcroma gourmet meal and a sit around the fire we turned in for the night. We were all saying our good nights when Lynzy reminded us that tomorrow was her turn to shoot.

The next morning we had a quick breakfast and off to the blind with Lynzy behind the Barnett. We weren’t in the blind long when several warthogs came in. My sister’s favorite animal is a pig but that didn’t stop her from taking a warthog. The wind was swirling and the warthogs were catching our scent, this made them very nervous which caused them to move a bunch. They actually looked like frogs hopping around out there. Lynzy was patient and she stayed ready on the shooting sticks. When the big boar turned broadside she squeezed the trigger and the broahead sliced right through the boar. He rolled over and took off.

Lynzy was super excited and ready to go get her trophy! Johan, Dad and I were discussing the shot placement. The bolt was so fast that we just could not be sure of a good hit so we told Lynzy that we must wait two hours before we started tracking. If you are not one hundred percent sure of your hit you should always wait before you take up the track to give the animal time to lie down.

After an hour Lynzy was about to drive us crazy and it suddenly dawned on me that I had the shot on video and could slow down the footage. Even at slow motion the bolt was moving like lightning but after many reviews we determined her shot was a great hit. We started tracking and it wasn’t long before we came upon half of Lynzy’s trophy warthog. Yes half. You see the circle of life in Africa can be very short. The jackals found the old boar before we did. Luckily the front half was untouched and we could salvage the cape for a shoulder mount for my sister’s room. I do taxidermy work now and I will mount it for her. She will be excited.

We took the warthog back to camp to show Mom. Mom did not think the half of warthog was all that beautiful. Actually Mom doesn’t think a whole warthog is all that beautiful. She said, “They have a look that only their mother would love.” She didn’t say that real convincing either and then the discussion of the mounted head came up…..we will hang it up while she is not home and surprise her, that trick works every time!

OK, Lynzy’s hunt is done so tomorrow will be my turn with the Barnett! Just about the time that I get that thought in my head Lynzy comes up with this comment, “Well tomorrow I get to shoot something with horns.” It caught me so much by surprise that I froze for a second at a loss for words. Which gave Johan enough time to say, “You got it my little African Huntress.” I’m thinking “African Huntress, you’re kidding me right? African Huntress….”
It was cool to listen to Lynzy tell her story to everyone ten times each. She was very proud of her accomplishment and I was very proud of her. She is turning out to be quite the little African Huntress! Johan’s little Jack Russell tracking dog named Jasper took a real liking to Lynzy and Lynzy almost turned it into a cat by petting it so much around the fire. She even told Jasper the story about her warthog!

Well the next day put us in a blind that just looked great and sure enough it did not take long before game started to come in everywhere. A lone impala walked in and Lynzy was ready. The impala was super close. I’m talking eight yards! When she squeezed the trigger.   The bolt hit the impala high through the spine and it went down and stayed down! Needless to say we were excited! I will never get the Barnett back!

When you read this article you may get the feeling that I pick or fuss at my sister but actually we have a great relationship. I am very proud of her and I love spending time with her in the outdoors. Take notice I said in the outdoors because most times you can not talk much while hunting, at home, wow different story, she never shuts-up! Just kidding sis, I love ya!

A Barnett crossbow is a great way to introduce folks to hunting, especially kids and ladies due to zero recoil or muzzle blast. The Barnett crossbow is the only weapon that my Mom and Sister want to hunt with. The bolts with broadheads fly like field points and kill like dynamite. Thank you Limcroma Safaris!

For more go to: Barnett Crossbows

Your buddy,
Ty Weaver
“Every kid is waiting to be invited outdoors.” “Ask them!”