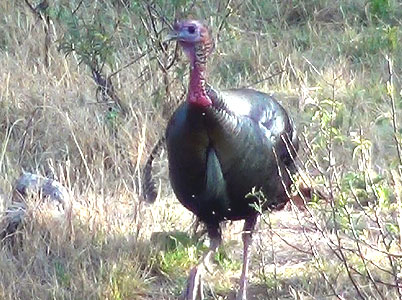 David Krauskopf drove Fred and I to to the area John Hamlett wanted us to hunt this afternoon. It was indeed an interesting area. We stopped on a hill overlooking a winding creek with water in it. The hill dropped off very sharply and the area below had a winding creek with water in it. Tall reeds and thick brush lined both banks of the creek. Trees were on the South side of the creek and a ground blind was set up there. The East side had scattered cedars and ground cover.

Fred and I looked around a little and set up our own blind next to a tree where we could watch all around us. Several trails were within bow range of the blind. 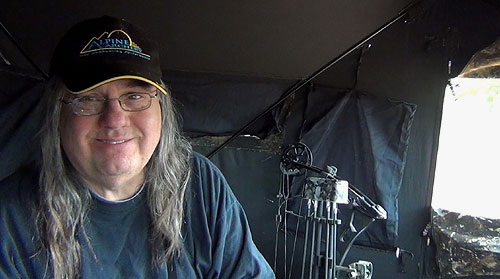 The ranch pickup was barely out of sight when we saw our first visitor, a fat doe. I walked right by us. 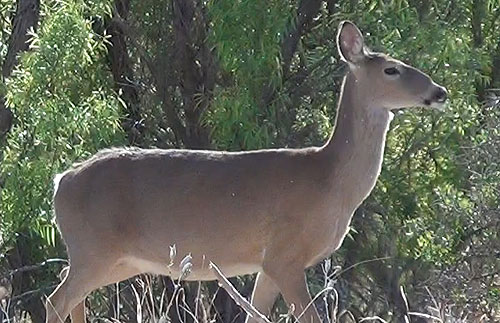 Mosquitoes were already slamming us and Fred turned on his ThermaCELL. I had some extra pads in my gear and got one out in case Fred’s got used up.

For an hour, I called every 15 minutes. Then two gobblers walked by the blind across the creek and continued toward us. I yelped at them and they dropped down to the brush along the creek. 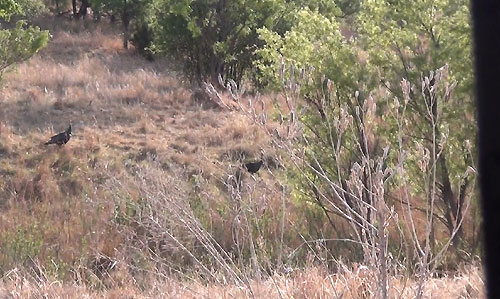 Here is a pic of the gobbler when he got closer. A Jake. I walked him. 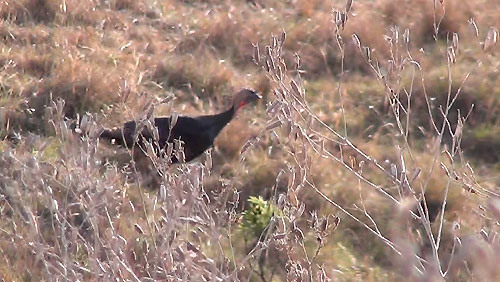 Half an hour later I got an answering gobble on our side of the creek. I gave him a little more and at two different gobblers answered. The gobbles continued to get closer and then we saw a mature gobbler 35 yards away. 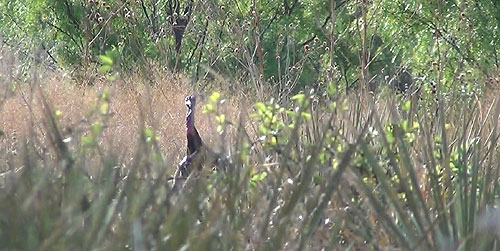 Without hesitation, the gobbler went into the reed shaped plants in front of us. Two more gobblers were behind him and they all advanced towards us. I got a picture of two of them when they stopped and did the wild turkey periscope-head-thing to check the area out. They are 15 yards from us.

The reeds were in the way. I waited and watched the 3rd gobbler walk around a cedar and get on a trail that led right to us. 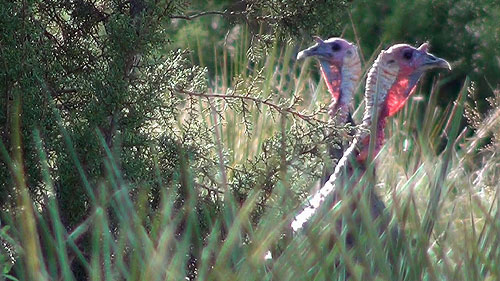 Right now the sun was shining directly into the blind. That’s definitely not a plus. I leaned slowly to my left, so I was out of the shooting window, and put my Alpine FireBall into the stops. Then I carefully shifted myself back into enough of the window to take a shot.

The gobbler was still on the trail and standing 15 yards away. He saw me come into view in the window and darted back into the cedars. The other two held tight, looking around. Finally they left and I let down. They continued to gobble so I called several times.

A few minutes later a gobble rang out from the trees across the river and we saw him a few seconds afterward. A nice longbeard. 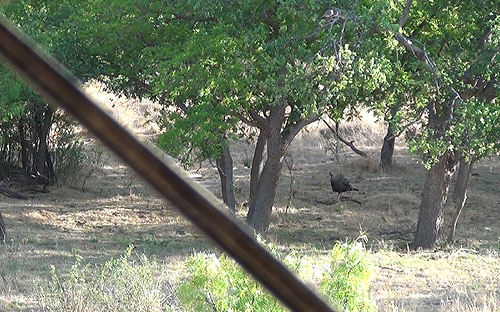 When the gobbler got to the edge of the woods he stopped and looked all around. I did the hush mouth and waited him out. 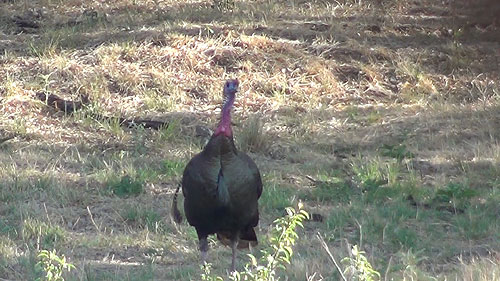 That didn’t take long and he was on the way down a trail that went toward the creek. 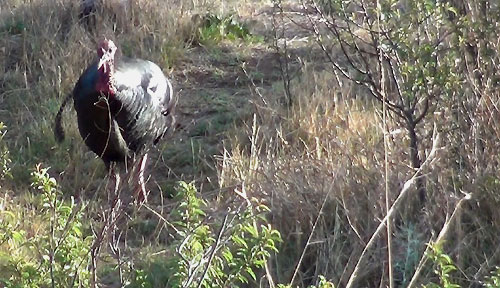 Doing just like I wanted him too, the longbeard went into the brush and cover along the creek. 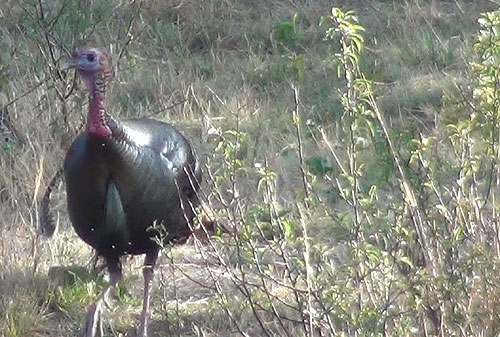 And plodded on through. Right now, he’s 40 yards according to my Nikon range finder. Things were looking good. As soon as I saw this gobbler I got ready to shoot so if he did the right thing I was good to go. 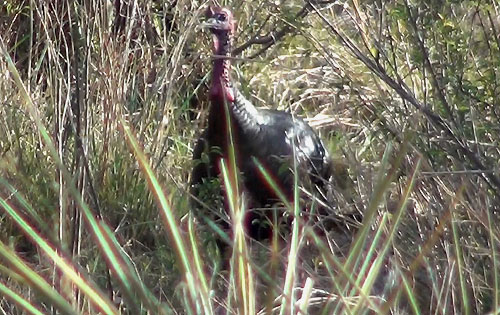 We heard him fly across the creek. Now he had to come up the creek bank on our side. Fred and I scanned the reeds and brush for him. In a couple of minutes I saw him.

He was standing back from the edge of the reeds — watching inventively. He may have been there for over a minute. 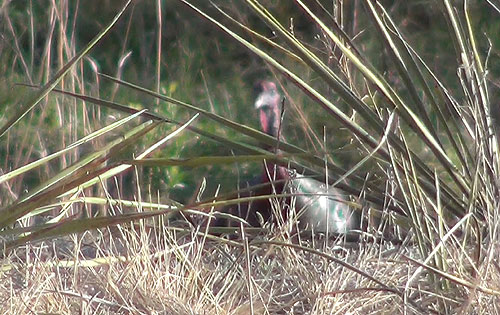 All I needed was a couple of steps to have a nice 15 yard shot.

He took the steps, but they were in the opposite direction. A few minutes later we heard him fly back across the creek about 50 yards to the West.

This day was really something. Bug Johnson Outfitters had a great place to hunt wild turkeys.

We still had 2 1/2 hours of hunting left and more was gonna happen. And  we were gonna meet Super Gobbler too.

A Bird? A Plane? No, It's Super Gobbler