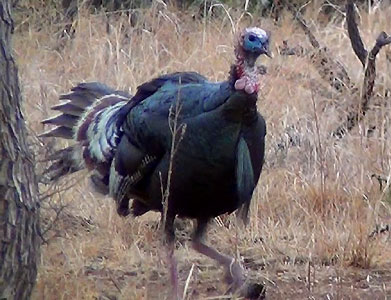 Fred Lutger returned home for a few days after our South Dakota turkey hunt with Dave Keiser. But he had one more species to get to rack op his Grand Slam for this 2011 Spring season. A friend of mine, Sky Watkins of TexasOutdoorsman.com, invited Fred and I to bowhunt gobblers at Big Johnson Outfitters near Snyder, Texas.

I picked Fred up at the DFW airport and we hit the road and arrived late afternoon. When we entered the ranch we started seeing wild turkeys right away. Things looked real good.

Sky was waiting for us at the ranch lodge and headquarters. He introduced us to our hosts John Hamlett and David Krauskopf. We had a nice visit and ate dinner. Then we turned in.

The next morning John took us to a place he wanted us to hunt. Early this year the ranch had put out hay round bales for the area cows. John had a pop up ground blind set up there (you can see it on the right in the picture below.) Fred and I looked around quickly and set up our Double Bill in what we thought was a good place. And just in case it wasn’t so good, we could see all over the area in 360 degrees and figure out where the good places were.

When we heard a distant gobble Fred yelped an answer with his Wicked Sister mouth call. A few minutes later a second gobble sounded. This one was closer.

Fred Lutger hears gobbles in the distance. He calls and the sound get closer. Fred gets his Alpine F1 Fireball ready and waits to see if the Rio Grande gobbler will show.

Fred called several more times and the answering gobbles got closer and closer. Then we saw several wild turkeys coming our way through the trees. The leader of the pack was a hen.

The turkeys came in single file, and at a quick pace, a mixture of a dozen or more hens and Jakes.

Another gobble rang out from behind the  wild turkeys that were passing our position. We both saw him strutting along behind the last of the group. I had the video on him as he came into our mix.

He dropped his strut and stepped out to catch up with the rest of the group. 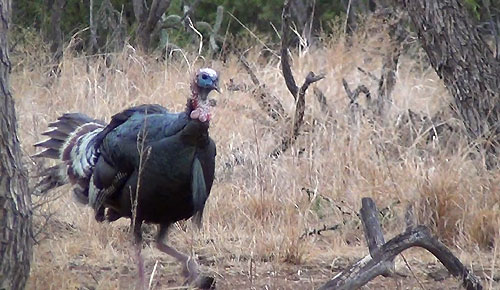 Fred called at the gobbler and it slammed on the breaks and looked things over in our direction. 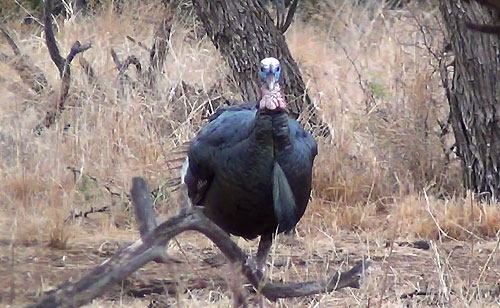 The longbeard Rio walked behind a tree. Fred yelped at him again and he backtracked a few steps and checked things out again.We needed him to check us out about 10 yards closer. 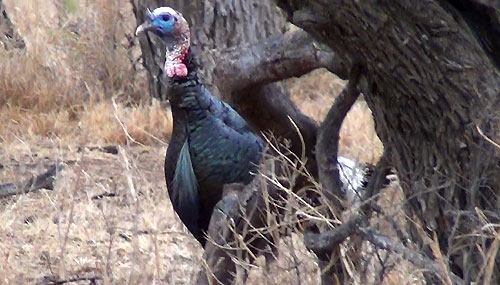 It’s the age old turkey hunter’s dilemma; when real hens are in sight, chances are always in the favor of the live hens. And that’s the way it came down now. Here the gobbler is passing right by the other ground blind on his way to hook-up with the real hens. 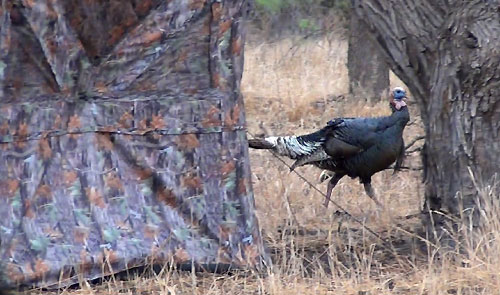 Ahhh, but the hens had already moved out of the area. The gobbler apparently lost interest in chasing the hens down this morning and we saw him again. Fred called at him. 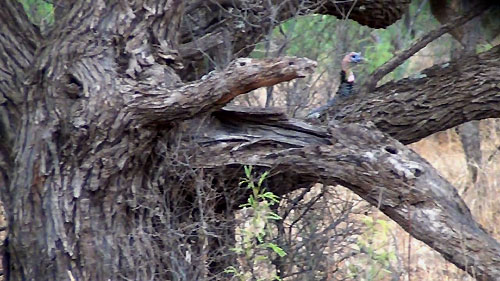 He changed directions and passed through our area again but kept us a good 40 yards away. In short order he was gone. 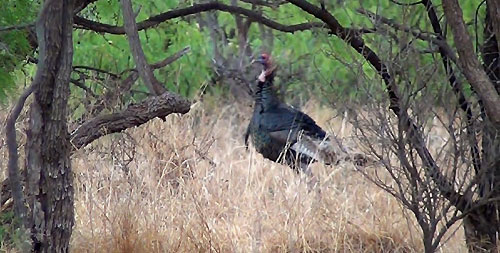 Earlier this morning the temperature was cool, very nice. But as time passed it heated up some and the dreaded Texas mosquitoes came out of hiding. And found us. Yikes.

Fred reached in his backpack and got out his ThermaCELL and clicked it on. In a few minutes the blind was clear of the pesky chain-saw-mouthed ‘squitoes.

Half an hour later we saw more wild turkeys walking in our direction. Unlike the earlier turkeys these ones were spread out and took their time. 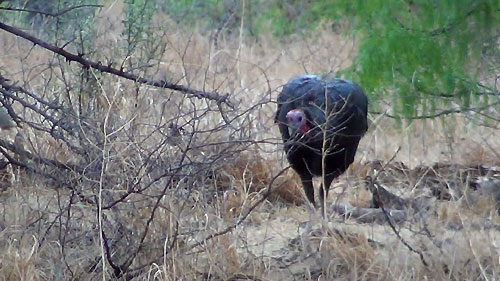 Here is another Jake Rio gobbler. Both of these gobblers came close enough for Fred to take a shot. But we could still hear the big boy’s gobbles sounding off in the general area. And Fredmwas pumped for another meeting with the big longbeard. 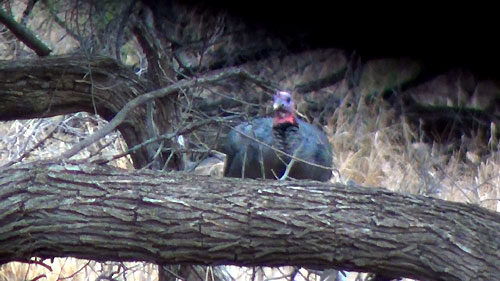 Because this area is used by the ranch’s cows there are plenty of “cow pies” laying around. The Jake below is scratching the “pie” and inspecting the debris for anything edible. 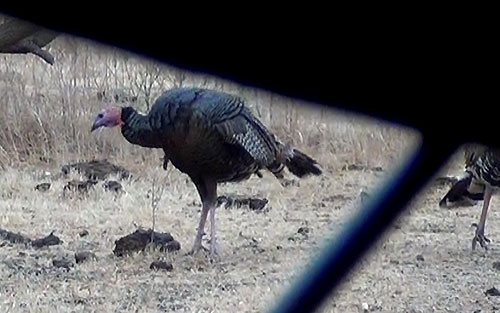 Around 10:00 AM the last wild turkey visitors left the area. 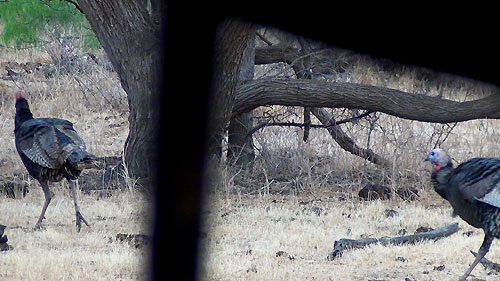 We discussed phoning the lodge and going in for something to eat. Eating sounded good right now, but we decided to give it 30 more minutes. Boy was that a good idea.