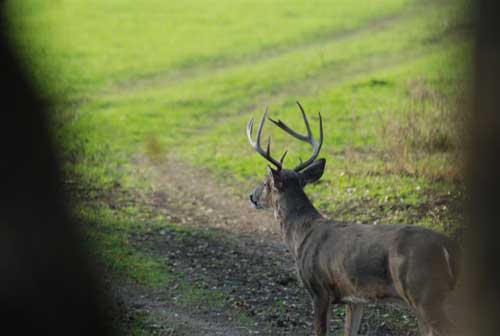 Yet another " No way sweetie buck"

In my last article I shared with you Jim’s whitetail adventure from Circle T Bowhunting Ranch in Commerce Texas over the week of Thanksgiving. The ranch manager there is our “Big Daddy” Johnny Kennedy who is the Archery Pro Staff Director for Nikon Sport Optics with whom we have worked with for 10 years. Kenneth Tallent is the owner of Circle T Bowhunting Ranch which was established in 2003. He also owns Tallent Roofing located in McKinney Texas where he was born and raised. Kenneth owns several other businesses in 6 states. What I didn’t tell you about in my last article was my adventure with the “Sweetie Buck’ at Circle T.

Our first morning out was an eventful one. Johnny and I left Jim sitting on the edge of a food plot in a tri-pod stand and Johnny and I were off to a box blind. Usually I don’t have the pleasure of having someone to hunt with but on this adventure Johnny was going to be my wing man so to speak. He had been watching several nice bucks during the summer and early fall and had one in mind that he was hoping would come to our neck of the woods. They are on a strict management program and were wanting to cull certain bucks.

Our box blind was sitting about 60 yards inside the woodline with a great view of a food plot. There were several trails that intersected to the right of the blind and the main trail led to the food plot. It was a great place and I was excited to be sitting in a blind with so much potential. As Johnny and I sat and glassed I caught movement out of the corner of my eye to my right.

We had several deer come in at day light and one nice 8point, I looked at Johnny he shook his head and whispered “no sweetie”. Where I come from that was one dandy buck but in Texas everything is bigger and I trust Johnny. The buck was weak on his left side and Johnny knew there were much better deer. As the buck walked off I looked at Johnny and slowly pointed to what had initially caught my eye. He looked and then turned around and said “where is it, I don’t see anything”? The problem was he was looking for a deer, what I was looking at was not on the ground but in the tree, what I saw was my nemesis, a huge fox squirrel and it was a Booner!

Until now Johnny did not know about my obsession with fox squirrels, I don’t let everyone know due to the fact I usually get the same look, you know the one, the “are you a half bubble off plumb look” Well, that is the look I got from Johnny and he chuckled a little, that was until the squirrel came in front of the blind and I drew on it.

As I drew my Mathews Z-7 Johnny just looked at me in disbelief and said “are you going to shoot it”. I just nodded my head in affirmation and let my Carbon Express arrow fly. Just as my arrow got to him he moved to the left…….a clean miss. Foiled AGAIN!

Needless to say Johnny and I both got a bad case of the giggles and my secret was out. I spent the next few minutes explaining my scoring system for squirrel. Bronze, Silver, Gold, P&Y and then the of course the Boone and Crocket or Booner for short, which is what I am always after. But to set the record straight, I don’t squirrel hunt during prime time or if there is a lot of deer movement. I squirrel hunt when it’s slow. I always carry two squirrel arrows and three arrows for whitetail.

Our morning and afternoon ended with no whitetails or booners on the ground but we had a great time and saw some dandy bucks. Jim also had a great day of hunting but nothing fell to our Mathews Z-7’s today.

Our evening ended with elk steaks on the grill a roaring campfire and Kenneth and Shannon came over and shared the evening with us. There is no better way to end a day then sitting with friends, starring into the burning embers of a fire and swapping hunting stories and bending the truth a little.

Sunday we were up and eager to get back to the woods. Johnny and I dropped Jim off and were headed back to our box blind. We were set up well before first light and ready for what the day offered. We had movement before daylight but could not make out how big the buck was. As daylight finally made its presence known we could make out antlers on a nice buck, I looked at Johnny and said “he looks good to me what do you think”? The buck was in woods and it was hard to get a good look at him, but after several minutes of glasses Johnny looked at me and said “no sweetie, not what we are looking for”.

Okay, now we have to understand something here, my finger is itching and I have back strap on the brain. We are looking for 8 and 9 point bucks that have reached their maximum and Kenneth told us he wanted these taken out of the herd. Kenneth also told us about two bucks that needed to be harvested one had a bad right eye that was infected and the other had a mass growing on his face below his eye. He said if we saw either of these bucks to harvest them. So as I watch another nice deer walk by the box blind headed to the food plot I get the “no sweetie” from Big Daddy. I must admit I was beginning to not like that answer at all. I looked at Johnny and said “how about a YES sweetie on the next one that comes by” he just grinned and said “I will if it’s what we are looking for”. I was thinking it could be a long week but at least the woods were full of fox squirrels for me to shoot during the slow times and we did not have a shortage of deer to watch either.

As Johnny and I were sitting in the blind quietly talking I was glassing the food plot and Johnny was glassing the woods. I leaned over and touched his arm and pointed to the end of the food plot. He scanned the area I had pointed and we both looked at each other. It was a huge 8 point buck that had to be 4 inches or more outside his ears and he was very tall, I would say a 150 class buck. I was, needless to say, drooling on my camo. He was about 200 yards away and I was hoping he would come our way, but he didn’t. He cut across the end of the food plot crossed the road and headed to a huge field on the other side. We never saw that buck again, but the buck that we saw on the first day did make another appearance, the 8 point buck with the weak left side. Again a “no sweetie let him go, we can do better”.

Sunday Afternoon Kenneth invited us to his house to show us his trophy room; it was magnificent to say the least. He has hunted in several parts of the world including Africa and has some stunning mounts. He was in the process of hanging some of his collection that he had just received from his taxidermist. He was telling us stories of his hunting adventures and I noticed a pelt on the back of a chair and another lying on a table. I was not sure what they were so I ask. Kenneth said that they were opossums from New Zealand, they were a beautiful dark brown color with a long soft tail, nothing like the opossums we have here. He said “Lynne if you would like one of those you are more than welcome to have it.” I could not say no, the fur was luxurious and I can not tell you how gracious that was for him to offer us something that he had harvested. I was honored.

He then walked over to the bar where he had some artifacts laying that he had purchased in Africa. He said “Would you like to have one of these African masks? I think they are kind of neat.” “I would love to have one” I replied. He looked them over and handed me two of them, they were hand painted and beautiful. How do you thank someone for that kind of generosity? All I could do was say “Thank you” but words can not express the gratitude. We really enjoyed Kenneth showing us his trophy room and sharing hunting stories with us during the week around the campfire.

Sunday evening turned out to be a great evening for Jim; he harvested not one great buck but two. He harvested a 10 point and he also harvested the buck with the bad eye. It was his best day ever in the woods and also the largest bucks he has ever harvested with his bow. We were definitely off to a great start on this adventure.

Monday was shaping up to be another great day. Before first light we had a buck in front of the blind but we did not have enough light to make out what it was. We used our Nikon 10×42 binos but could not make out points. I was ready just in case he decided to stay around till it was light enough to see. Johnny and I continued to glass as daylight finally broke through the darkness. It was light enough now to see the pins on the Sure-Loc Max ST sight and I could also see it was a dandy buck.

I looked over at Johnny and whispered, “What do you think” I knew he was big enough and could make out 9 points. Oh my, what a buck and he was headed our way. He had been staging in the edge of the woods and was now on the trail being very careful before he made the commitment to go to the food plot.

Johnny kept looking at him and finally he turned to me and grinned. Oh boy, the words I had been waiting on it was going to be “Yes Sweetie”. I waited, waited and Johnny said “No sweetie he is an 11 point”. WHAT! WHAT! REALLY! NOOOOOOOO! Not the dreaded “No Sweetie”! Okay, I have to keep my cool here. So I gave Johnny the kitty eyes and said “Are you sure”? “Yes, I am sure when he turns you will see he is an 11 point. So I picked up my Nikon bino’s as he walked toward us and looked hoping that by some odd chance Johnny was wrong and had forgot how to count. Sure enough the buck stopped about 12 yards in front of the blind he was a big 11, foiled again. Foiled by my nemesis and now by this buck that seemed to be growing in front of my eyes.

We sat and watched him for a long time, he offered every shot you could imagine, broadside on both sides, slightly quartering toward, slightly quartering away, you name it and the big buck offered it. Finally he headed into the food plot and walked out of our lives……..forever.

NEXT: The No Sweetie – Part II