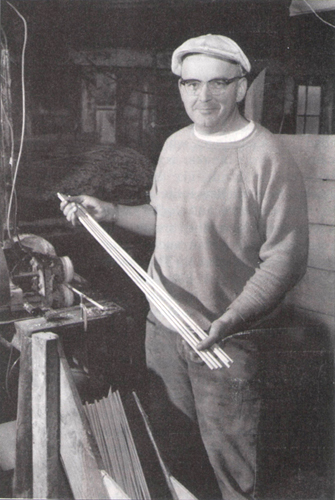 Archery industry pioneer and Norway Industries Founder, Tom Coffman, passed away Wednesday, May 11, at Mercy Hospital in Roseburg, Oregon. Tom had been traveling with his wife, Jean, and their companion when he suffered a brain aneurism.

Tom Coffman’s contributions to the archery industry span six decades. Though he would become one of the industry’s leading manufacturers, his beginnings were quite humble – he operated a wooden arrow shaft company out of an old cow barn. For 60 years Coffman consistently doled out top-of-the-line equipment to the archery world. His legacy includes the time-honored staple Duravane arrow fletching as well as the archery industry’s most widely used fletching device, the Norfletch automatic fletching machine. In recent years, under Tom’s continued guidance during “retirement”, Norway Industries has manifested their production to include machining golf putters and rescue equipment, components for a top-of-the-line car top carrier company, private label pieces for many of today’s prevalent archery brands, injection molded/extruded plastic components and machined metal materials.

A lot has changed since the days of stacking wooden shafts in the drying rack, but archery is still at the core of the company Tom created and is an evident thread that is woven throughout so many of his innovations.

Norway Industries’ vane lines continue to grow and include premium fletching offerings such as, Predator, Fusion and most recently the industry-changing Zeon Fusion and Raptor vanes. Tom accomplished all of this while his time-tested Norfletch fletching machine remained (and still remains) an integral part of day-to-day operations for many of the archery industry’s largest and most successful manufacturers, distributors and retailers of arrow products. Since its inception Norway Industries has been fortunate enough to diversify their production under the careful leadership of this pace-setting, innovator who always recognized room for growth in life as well as business.

Thomas Edward Coffman came into the world on September 24, 1922 in Milton, OR, the son of Floyd and Millie Coffman. He died May 11, 2011. Tom spent his youth living on the family farm in northeastern OR until he went to college at Eastern Oregon College in LaGrande. It was in college that he met the love of his life. He and Jean started their life together six months later.

That life included farming, working in a sawmill, and starting Norway Industries in1958. He loved the challenge of growing their business of manufacturing arrow shafts. He also loved flying his airplane, being on the school board, and serving his Heavenly Father.

Tom’s other treasure was his family. He was father to Janis Melton, Linda Holland, Becky Starr, Jodi Bouska, Carl Coffman, and Jill Halliburton; he was a grandfather to 17, a great grandfather to 21, and “looking for two more little strangers,” as Tom would say. He was a strong father who showed his love by being a good role model, by providing for and protecting his family, and by loving his wife. He and Jean, who survives, had a love affair that lasted 67 years.

There will be a Celebration of Life for Tom on Saturday, June 4 at 2 pm in the Oaks Pavillion at the Coos County Fairgrounds (900 4th Street, Myrtle Point OR). Arrangements are under the direction of Amling Schroeder Funeral Service.

Please keep Jean and the Coffman family and friends in your prayers during this difficult time. Cards may be sent to their home at 1539 Carlisle Ln, Myrtle Point, OR 9745.