by Tink Jackson
in Bowhunting Posts
0 0
A A
2 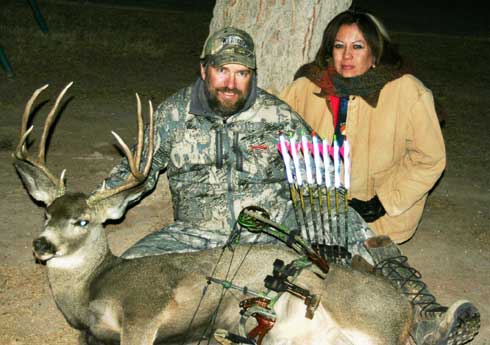 Me and my wife Yolanda with the “Basket Buck”.

I utilized available cover and made my way back to within 200 yards of that stand of trees. Glassing for a few minutes I could not find a single deer. No ears, no horns, nothing. I decided that they had continued to move and quickly made my way to that spot. I looked south from the trees and could not find them. Where had they gone? After a few minutes I noticed an old cow trail with a lot of really fresh deer tracks in it. In this dry windblown dirt I might just be able to track them down. I got my mind right and off I went.

This was about 9:30 AM. I tracked them about 4 miles and finally lost the trail in a grassy lowland where the trail ended in a small draw. They had been headed south the whole time, but the terrain and some laid over grass told me that they turned west and were headed back to the canyon. I headed towards the canyon observing every busted twig and bent piece of grass. Covering as much country as I had, I realize that if they hit the canyon the direction the draw was headed they would be sitting at my vehicle waiting for me! Now wouldn’t that be a laugh.

About 10 minutes later I was approaching the edge of the canyon, and right across from it I could see my vehicle. All of that work and then my tracking had let me down. I “dropped my guard” and started heading for the vehicle. I had walked a lot of miles and that soft seat and a cold bottle of water was going to feel really good right about now. I picked up the pace and then that feeling hit, you know, the one that makes the hair on the back of your neck stand up.

I looked across the draw, and not 50 yards from me (and less than 75 from my vehicle), there they stood. The big old buck broadsided and relaxed. I stopped behind a yucca and gave them a minute to “forget” me. I started glassing through the spines of the desert blind and I could clearly see all of the deer, except for my basket horned buck. Where did he go? If he had broken off from the group in the last 6 or 7 miles did I really want to pass up the chance to harvest this big old buck? I mean, come on, he was really close to the vehicle and a short drag would be a welcomed change!

I drew my Alpine Nitrous and dropped a pin on him, but then let down. Where was that other buck? I drew and dropped the pin on him again, but I could not pull the trigger. After a couple of minutes, they quickly headed down the canyon. And then all of a sudden, there he was. My basket horned buck was still with them. He had been down in the bottom of the draw out of sight the whole time. I watched them walk off and let them go quietly. The day was still young enough to make one more move on them.

I stopped at the vehicle, enjoyed a bottle of water and some relief for my feet that had already covered some 12 or 13 miles and called my wife. She had the right attitude proclaiming “you will get him this day”! With enough time left to locate them and make one more stalk, I headed out. I knew that they would stay in the bottom of the canyon as they went south. No cover outside of it past this point. Nothing but flat desert for as far as the eye could see. There was an old stand of dead trees a little over a mile from the vehicle and I figured that was where I would find them.

I covered a lot of ground quickly, following the trail they had left as they headed south. As I approached the bend in the canyon right before this old stand of dead trees, I slowed and began to stalk methodically and quietly. Carefully examining each bush, tree, and rock for an ear, the line of a back or leg, or a white spot. Within a couple of minutes I spotted the first doe, then another and then the rest of the group. Once again, the old buck was right in the middle of the does and the other buck was not to be found. I glassed through them repeatedly but he was nowhere to be found. We were about out of country and I was about out of time for the day so something had to happen soon.

The deer continued feeding towards the south. And I decided that my best option was probably going to be to sneak right back out of there and try again the next day. It was already after 4:00 PM, sunset would come before I could get back to the vehicle as it was, and I still wanted to get another look at that other buck. I decided to stalk around a small knob to the east and get one look up that little draw as I headed back. Maybe he was right around the corner just out of sight as he had been earlier. I had already tracked them so far, I had to check.

I slowly walked around the knob and there the basket horned buck stood! Not in with the group, but positioned where he could see them, and I was close. I used another desert blind and ranged him. He was at 35 yards. Time to put my Alpine Nitrous and all of those practice shots to work! I nocked my Gold Tip arrowed fitted with a VPA Terminator Broadhead, waited for him to turn his head, drew and let her fly! A minute and 20 yards later he was down and it was time to go to work. At that point I realized I still did not know what it was about those horns that had kept grabbing my attention. But now I could go see.

He was a nice New Mexico 9 point muley. Not even close to the widest, the tallest, or the heaviest buck I have ever harvested. But he was unique. He had a set of horns resembling a white tail, with each tine coming off of the main beam and main beams that looked curved and swooped forward. Something I have never seen on a mule deer before. What a beautiful animal!

Would I call him a trophy mule deer? You better believe I do. But, probably not for the reasons someone else would call him that. Based on how I just described the horns most would think that I would label him a “trophy” because of the unique set of horns.

While they were a nice bonus, the fact is I consider this buck a trophy because of the tracking job I completed in his harvest. From start to finish, I had tracked this buck near 10 miles through some of the nastiest desert that exists. By far, the best tracking job I have ever finished in my life.

With God’s help, the freezer would once again be full. For me, the “trophy” label was all about what I accomplished as a hunter and provider for my family, and not about the physical characteristics of the animal at all. One more measure to add to that list.

God Bless each of you as you enjoy the wonderful outdoors He created for us. May He make your harvest bountiful (Genesis 9:2-3)!

A Bird? A Plane? No, It’s Super Gobbler

Get Your Dad A ThermaCELL for Father's Day