by Wade Nolan
in Bowhunting Posts
0 0
9 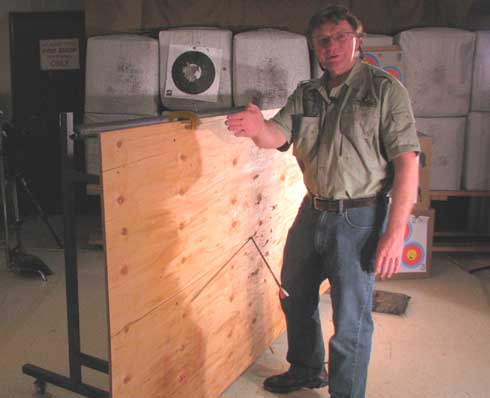 The Swhacker 125 grain head blasted through the 67-degree plywood, which was the steepest plywood test I have ever attempted.

Broadheads do their most damage when the arrow’s travel path through the deer is greatest. Most bowhunters know this is best achieved with the quartering away shot. The quartering shot also causes the deer to be facing away from the shooter, which reduces the likelihood that your drawing motion will be detected. However, there is a conflict when you get honest and look at the performance of some mechanical broadheads.

I was concerned about this factor when I was conducting testing at the shooting lab. To test this factor against various mechanical heads I set up an experiment where a Hooter Shooter would shoot identical arrows tipped with a variety of mechanical heads at an angled piece of ½-inch plywood. The critical factor here is to set the plywood up at exact replicable angles for each shot so we could actually see how various broadheads performed.

To catch the performance on camera would be a tough assignment but for the $70,000 slow-motion camera that I was using to record the broadheads performance at contact with the plywood. At about 4000 frames per second I was able see the results as the heads came in to contact with the angled plywood.

If you would like to set this test up at a bow shop’s archery range and just test for angle of penetration you can easily do so. I’m confident our test is repeatable. I used a protractor to establish the angle of the plywood in relation to the path of the arrow. I relied on a bow-mounted laser to aim. During set up, I actually employed a mechanical engineer to double check the angles. The distance was 15 yards from riser to target.

Although we don’t hunt angled plywood, this is a valid test. We’ve all heard about a steep angling shot on a whitetail with a mechanical when the broadhead traveled down the side of the animal or skipped, rather than penetrating. This results in a wounding loss and is unacceptable. My goal is to use this test to help inform you of mechanical broadhead performance on angled shots. If a broadhead will penetrate steeply angled plywood then you can be confident it will penetrate an angled whitetail or other big game animal.
Conversely, if it deflects and fails to penetrate then you should possibly examine the ethical issues involved in using that particular mechanical on quartering shots. The success or failure of a broadhead during this test is an important factor to consider when choosing terminal arrow tackle.

A quartering shot denotes a 45-degree angle to the path of the arrow. As a deer turns toward totally broadside he angle approached and finally reaches 90-degrees. As the deer turns further away from the path of the arrow the angle reaches 67 ½ degrees. This represents a very steep angling shot. On a whitetail, this shot would necessitate the arrow entry point to be immediately in front or the rump, angling forward.

I am not going to name names but will note each model is a popular mechanical head. This report, naming each head in the test is available however because you need to know how various mechanical broadheads performed in this series of tests. Because I anticipated some of the arrows deflecting off the plywood, I set up backstop targets to intercept the arrows that skipped off the target.
The slow motion evidence of this test is available at: SHOT ANGLE

We began by shooting a 2 ¼ inch wide 125 grain Swhacker at very steeply angled 1/2 inch sheet of plywood. I began with the steepest angle I’ve ever tested on a broadhead/plywood test…67-degrees.

The slow motion revealed that the Swhacker broadhead design allowed the Trocar-tip to grab the plywood upon contact. The bone-chisel blades then sliced open the wood fibers and the 2 ¼ inch wide cutting blades scissored open as it passed through the plywood. The slow motion revealed an explosion of severed wood fibers as the Swhacker blew through.

At this point, I thought that most or all mechanicals would perform in a similar fashion. I was very wrong. Next, I set up today’s most popular mechanical broadhead BHD – A,  100-grain 2-inch wide two blade on the test bow and shot it at the exact same target a 67-degree sheet of ½-inch plywood. The tip failed to penetrate the plywood or grab as it made contact. The broadhead skipped off the plywood like a flat  stone skipping on a pond. The plywood wasn’t even nicked by the impact. The arrow did some really fascinating contortions as its deflected kinetic energy followed he deflecting broadhead into the secondary backstop target.

Next, I shot the BHD – B,  100 grain two blade, which is 1.5 inches wide. This mechanical head skipped off the plywood like a grade schooler who just got all A’s on his report card.

The next head to try out the 67-degree plywood was BHD-C with 3 blades cutting 1 3/8 inch cut in a 100 grain version. This broadhead skipped right off of the plywood as did the next candidate BHD – D, a 100-grain 3-blade, 2-inch wide  mechanical, BHD – E  and the 4-blade BHD – F mechanical. The entire lot, all top selling mechanicals totally failed to penetrate the extra steep 67- degree angled plywood.

Not wanting to make this test too hard for the other broadheads to pass we changed the angle of the plywood to 60-degrees. The results were the same for most. All test broadheads except Swhacker skipped off and deposited its kinetic energy into the backstop. BHD – D did penetrate the plywood at 60-degrees but lost one of its three blades.

I tested BHD-A again at 55-degrees, thinking that the Slipcam design would grab at this shallow and realistic angle, but another stutter for this head. It deflected again. Finally, at 50-degrees, it penetrated the angled plywood, but slow motion revealed that it seemed to find a nick in the plywood that it followed when it finally penetrated.

What did I learn after shooting these heads into the angled plywood? First, I learned that not many mechanicals would perform on the angled plywood test. I discovered that the design of most heads neglected to address the angled shot as a criterion during design and testing. A “tip forward design” is the key to angle entry and not deflection. An engineering failure here can be the difference between a trophy on the wall and a sad bowhunting story.
www.swhacker.com