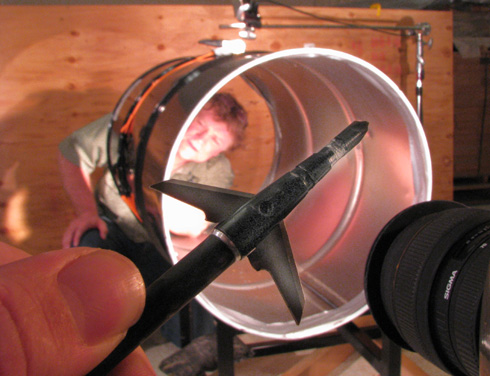 The Swhacker after penetrating the steel drum.

Why shoot broadhead tipped arrows into a steel drum? I shoot broadheads into drums because it tells an important story. In industry, there is a term called destructive testing where we measure the failure point of a device or component. That failure is used as a reference point to improve design. I have been conducting failure tests for broadheads since the late 80’s. Back then, like now, there are a lot of broadhead manufacturers that must have been absent on the day destructive testing was discussed in their engineering class. Broadhead failures abound when they encounter steel drums.

I was amazed by the repeated failure of a number of very popular heads on this test. Don’t get ahead of me here. I realize we don’t shoot steel drums while out whitetailing but I find it telling and alarming if a broadhead can’t stay together when penetrating a thin sheet of cold rolled steel. The similarity between thin rolled steel and an elk shoulder blade is real. Most mechanical heads have an especially difficult time with steel drums. 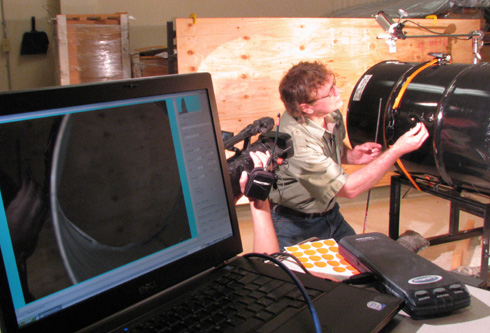 During my testing I discovered that some fixed blade heads do much better when slicing through steel. Then again, I have seen many fixed broadheads loose blades due to brittle steel or poor blade seating. It’s all engineering.

Since the advent of Computer Aided Design (CAD) programs, a manufacturer really has no excuse for designing a broadhead that looses blades when shot into normal substrates like tissue and bone.

A CAD testing program called Finite Element Analysis can determine where the weak points are in the metal when it is under stress. FEA uses very complex math to calculate the failure points. The weak points show up on the screen as hot spots. The idea is that the engineer can then revisit his design and fix the deficiencies. That’s provided the broadhead was engineered and not sketched out on a napkin in some restaurant.

Back to the Lab
I’m the guy who wants to see the science and that requirement took me to the shooting lab. I set up a 55-gallon steel drum with an average thickness of .9mm. The bow was a PSE EVO set at 60#. I launched my carbon arrows out of a Hooter Shooter at 16 yards. Then I began to launch broadhead tipped arrows for the camera. For testing I used the mechanical broadheads that you shoot when whitetailing. You’ll probably recognize the broadheads. The slow-motion camera was set up so I could see into the drum as well as get a glimpse of the arrows approach at 4000 fps.. 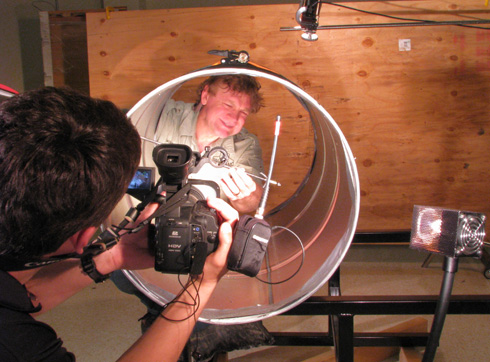 Here is what my team found. First, we shot the 2-inch Swhacker mechanical. The trocar chisel tip cut through the steel drum and then the bone chisel blades followed, slicing through the cold rolled steel leaving a one inch linear cut in the drum. Upon entry, the big 2-inch cutting blades deployed with virgin sharpness and then the arrow rocketed into the far side of the drum puncturing it up to the deployed blades.

This sequential blade opening is an important feature because on an animal you would get a one inch + entry and then razor sharp blades swing open, due to the dependable activated fulcrum design, and are available to slice internal organs. Because the sacrificial bone chisels have done their job the big blades are now wide open and serve as the main cutters. It’s a two step design. First cut through the hide and bone, then deploy the big swords… in a word, devastating!

The Swhacker mechanical performed as expected. Due to the long load-bearing surface of the blades, parallel to the ferrule, the big cutting blades hold up under extreme stress. This is a result of design, testing and engineering. In fact, we never had a Swhacker cutting blade failure across 5 days to extreme testing. Not so for the other guys.

I must admit that this first failure surprised me the most. The wide spread marketing had me convinced that this one would be a great performer. This first competing broadhead boasts a shock absorbing system but it appears the broadhead blades went into shock instead. I don’t know about you, but losing blades is a reality that makes me keep shopping for a broadhead I can rely on. This head may not lose blades on a whitetail but it did on the first shot into the steel drum during our testing.

This next head is our industries most aggressively marketed mechanical. A number of celebrities shoot this one on TV. I’ve always wondered why they shoot a particular head. Is it because the broadhead is an exceptional performer or because that broadhead company wrote a big check to the TV host? You’ll have to figure that one out for yourself. This broadhead did great under our testing. It was in perfect shape prior to getting to the barrel.

Upon impact you can see blades flying everywhere in the slow motion footage. I felt bad for this broadhead so we re-shot it 3 times and each time blade failure was the result. Sometimes they broke off before penetrating the steel drum and imbedded in the barrel’s exterior. Other times the blades broke off during penetration as if they were made of glass.

These test heads were taken directly out of the manufacturer’s pack that we purchased at a bow shop. The marketing said that they open on impact by using some complex design… but exploding on impact is what the barrel test revealed. My guess is these broadheads are probably not designed to shoot through tough substrates, like a steel drum.

We shot other mechanical broadheads as well. It’s likely some of these are the mechanical broadheads in your quiver. Four popular mechanical heads lost most or all of their blades upon impact. At times, the air adjacent to the barrel was full of tiny spinning and ricocheting silver blades. The slow-motion footage is impressive. Go to  www.bowtube.com for the Steel Drum Test to view the slow motion testing…the unbiased Broadhead Science. Your next buck may be in the balance.

If you’d like to try a couple of packs of the new Swhacker Broadheads you can get an unbelievable deal by going to www.hankparker.com

Choosing the Right Arrow for Hunting