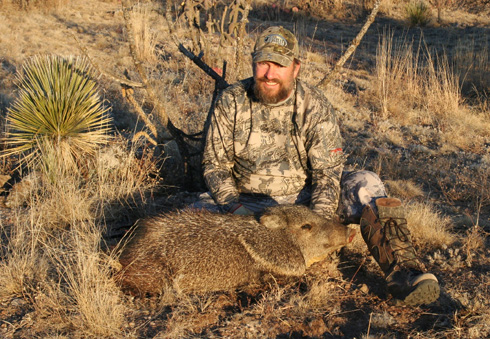 Author with his Desert Hippo.

I will be the first to admit that many times I spend far more time complaining about my “neck of the woods” here in southwest New Mexico than I do thanking the Lord for all of the blessings we truly have. I mean, come on, less than a month ago we were at -32 degrees with the wind chill and all of us were watching thousands of dollars of damage occur to our homes each day as the frozen pipes started to burst and thaw. Now, as I write this it is 80 degrees outside. And of course there are the daily winds that can easily hit 70 mph bringing blowing dust that can strand you wherever you are for hours as roads are closed for safety reasons. The weather here changes almost as frequently as the time. But in return for all of this, we are blessed with many magnificent things and with the opportunity to pursue some eleven different types of big game annually within New Mexico, depending on your luck in the draw, of course.

Some of these hunts are extremely hard to draw, but each year there is that chance! Others can be drawn almost annually, and as time progresses, I guess we all get into a routine of what we think we can draw each year and apply accordingly. One tag I can almost count on each year is a javelina tag.

Javelina numbers in New Mexico have exploded in the last ten to fifteen years and they range all over the southwest corner of the state. Travel any direction on any road and you have a really good chance of running into a herd of them. I have seen them in town, in the middle of the interstate, in yards and gardens and even on a helicopter pad at an airport. They have become almost as intertwined with man as the coyote has here in the desert.

The Peccary, or as I affectionately call them “desert hippo” is an extremely interesting animal. They resemble a common pig and are scientifically classified in the same family, but they also have some distinct differences (they are also noted to be genetically related to the hippopotamus family). One of the easiest differences to see is their tusks. While other members of the pig family grow a larger tusk that curves, the javelina has a tusk that is short and straight. These tusks, used for crushing hard seeds and ripping plant roots, are also their primary defense. The upper and lower tusks are place in the head and jaw in such a manner that each time the javelina opens its mouth they work to sharpen each other. By rubbing them together quickly, they can make a loud “clicking” sound that is a clear warning to anything that is too close to get back! If you have ever heard one “chomping” at you, it is a sound you won’t soon forget. 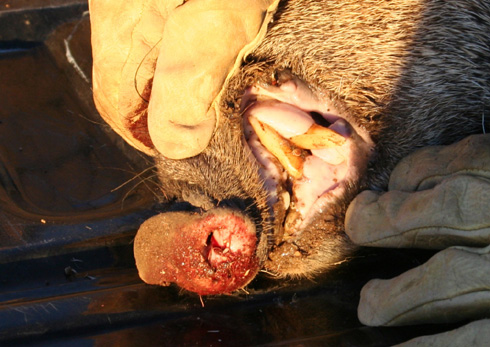 As a person that grew up in this area, the javelina has always been a part of my life. From having ranch dogs torn up, grass pastures devastated, or trash cans rummages through by them, I can recall javelinas from my earliest days. However, growing up in a family that hunted strictly for meat for the winter, they were never a game animal we pursued. Eat javelina? What? Well, in 2010, I was lucky enough to draw an early 2011 tag for javelina here in southwest New Mexico and get a chance to dispel the myth that javelina is not “what’s for breakfast”.

I actually started hunting javelinas a few years ago when a co-worker started shooting a bow for the first time. As I worked with him and he picked up the art of shooting his new compound bow, his desire to hunt with it grew rapidly. His request to apply with me for a hunt that year created a dilemma. All of the applications for the special hunts I would be submitting were already filled with applicants and there was no place to add him. A quick look at the proclamation revealed an opportunity. We could apply for a javelina hunt together. We did and God blessed us with a tag. I was pleased with the opportunities I had on this hunt to “train” him. We had ample chances to spot and stalk, to practice field judging distances, to observe animal behaviors and at the end to learn blood trailing, field dressing and care.

These little desert hippos also provided me the opportunity to hone some skills at a time of the year when there are no other hunts here in New Mexico. I knew I would have to do this again!

The 2011 hunt started with a trip to a ranch I had never hunted javelinas on. The rancher said he had been seeing a few, but the recent cold weather had made them hard to find. Not a problem for us. The hunt was 6 weeks long and we sure did not need an excuse to go stay at the ranch for a weekend and “poke around” seeing what we could find. On Friday afternoon, my wife and I loaded up and off we went. The recent cold spell had broken, the skies were clear and the sun was warm. Javelina or no javelina, this was going to be a well needed weekend away!

We spent the time we had on Saturday and half of the day on Sunday looking all over the ranch. We found a few tracks, but there was not a pig to be found. We had seen a lot of beautiful country, taken in plenty of fresh air and had a nice break from cell phones and the hustle and bustle of everyday life, so the trip was in no way a disappointment. Plus, we still had 5 more weeks to go, and if this all worked out right, there were more breaks from daily life to be had! 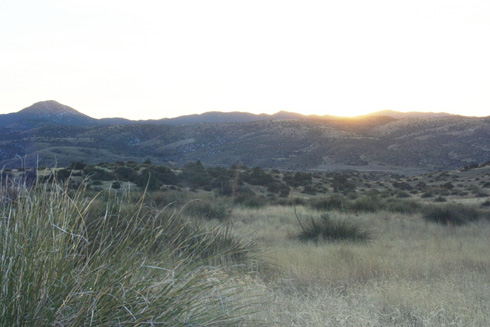 We thanked the rancher for his hospitality and headed toward home. As we hit the main highway I suggested to my wife that we make a call and run through some fields belonging to a friend of mine and see if we could still fill the tag on this trip. We had a couple of hours before the sun was going to be gone, so we decided this would be a good idea. These fields were the same fields I had harvested my javelina in the last time I had drawn a tag. We had drove by those fields on the way up and seen one small herd of javelina right before sunset. Maybe they would be back in there this evening.

A quick call and we were good to go. My friend told me that he had allowed a number of hunters into the fields over the weekend and he did not know if there would be any left in there with all of the hunting pressure they had faced. He suggested that if we saw none we should stop by his house and he would show us one more spot that might hold a javelina. There had only been one archery hunter in this spot over the weekend and they were in and out by noon on Saturday. With his permission secured, we were back in business.

We glassed all of the fields as soon as we got to them. Not a javelina in sight. With not much hunting time left in the day, we jumped at his second offer and headed to his house. Upon arrival, he came out and told us to follow him up a road and he would show us where to go. We followed him through a pasture, and just as we were about to reach the top of the hill he stopped and motioned for me to walk up to the top with him.

I jumped out and met him close to the ridge top. He explained to me that just over the hill in the bottom of the canyon there was a water trough that many javelinas liked to frequent. We snuck up to the top and got a good look at the water. No pigs in sight, but I noticed a really nice prickly-pear flat leading up to it and decided that was going to be the spot for the rest of the time we had left. The rancher hurried off back to his house to continue his weekend chores and we got ready to go. 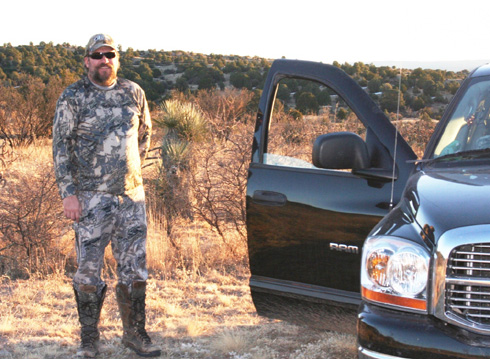 I have had some hunts that seemed to be over before they started, but this one took the cake. Down to the trough, through the fence, across the small sandy wash and there it was. A single javelina coming in for a drink and we all got there right at the same time. In a split second, I drew my Alpine Nitrous, dropped a pin right behind the shoulder, and the hunt was over. Time to get to work and get the javelina field dressed and loaded up. 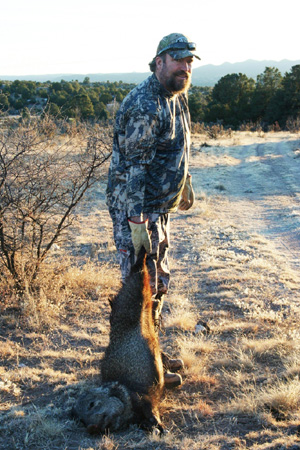 Now, remember that myth we set out to dispel? The Bible states in Proverbs 12:27, “The slothful [man] roasteth not that which he took in hunting: but the substance of a diligent man [is] precious.” That is the reason we did not hunt javelinas when I was a kid, because we hunted for food and not for sport. My beliefs in that area remains unchanged (save for control of predators without eating them), so, off to the cooling tree we went.

After a couple of days of hanging, an hour or so of cutting, and an hour of grinding and seasoning, my wife and I had the fruits of our efforts. A whopping total of 9 pounds of javelina sausage in the freezer. Now only one thing left to do – eat it!

About a week or so later, we pulled out the first batch on a Saturday morning and decided to give it a try. My wife, adding a couple of additional “secret ingredients” whipped up a batch along with some farm fresh eggs. Believe it or not, it was very tasty! The rich flavor had no game taste and with the red chili we had added to the seasoning was just as good as venison sausage.

To complete the myth busting she made another batch and I took it to my office for some of my staff members to try. I invited them to make a burrito without telling them what kind of meat it was. The guys jumped right in, ate until they were stuffed, and then started talking about how good the meat was and how they really liked the flavor. There were some interesting looks on some faces when I told them what they had just eaten! The myth was busted, well, at least in my little neck of the woods.

God bless each of you in your hunting endeavors.