by Trevon Stoltzfus
in Bowhunting Posts
0 0
A A
1 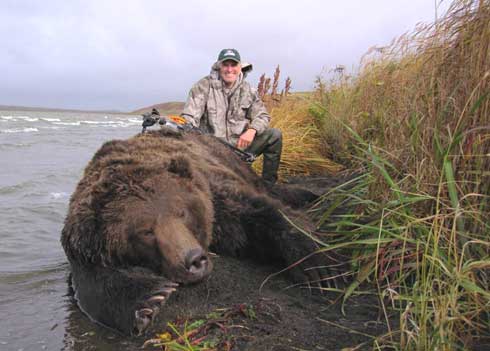 Randy Ulmer knows accuracy, like preparedness is of the utmost importance. On a huge animal like brown bear pin point accuracy means defining the kill zone and hitting where you aim.

A common trait that elite archery hunters share is preparedness. Preparedness screams success in bowhunting. But being prepared starts way before opening day. While visualization can be an important part of preparedness, there is so much more to this characteristic found in all of the “10 percenters” I interviewed.

Ray Howell, one of the most accomplished bowhunters I have ever met, explains his philosophy, “My passion for hunting and being in God’s creation has driven me to be a perfectionist in accuracy and knowing that each piece of my equipment won’t fail in order for me to make a humane harvest. I have three anchor points to make sure of my accuracy.  I practice using the equipment I hunt with.  I never change the poundage of my bow for different animals or league shooting. I use paper tuning to tune my arrows to the bow and use visual tuning with bright fletching to set up my broad heads.  I practice long distance shots out to 100 yards, which makes me a good short-range shooter.  My confident hunting shots are normally 40 yards or less which becomes a “chip shot” after practicing long distances. ”

Mark Kayser, accomplished outdoor writer and Television host, poses his theory on being prepared in this way, “Bowhunting isn’t an exact science and that’s mostly due to the variety of personalities that bowhunters bring to the field. Aggressive, passive and off-the-wall hunting styles all combine to bring diversity to the hunt. Although I miss shots, flub stalks and move in the treestand spooking mature whitetails, I still find consistent success. While I do practice nonstop, particularly in the months leading up to bow season, I follow a rule I learned from professional archer and successful bowhunter Randy Ulmer. It goes something like this, ‘Practice is great, but not if you’re polishing your accuracy. Instead of trying to shoot as many arrows as possible, shoot each arrow as if it is the only arrow you get to shoot.’ It makes sense. You generally only get one shot during an encounter so you have to make it your best shot. I practice in all different shooting positions, angles and ranges, but I don’t shoot hundreds of arrows. This routine prepares me to use my muscle memory when things are happening fast and over the years I’ve discovered my best shots have been when I have the least time to think about what’s happening.”

Bill Winke, a popular outdoor writer and host of Midwest Whitetails (www.midwestwhitetails.com) sums it up with, “The best hunters are very thorough.  They eliminate all the variables.  Randy Ulmer comes to mind immediately as a bowhunter who is very thorough in his preparation both mentally and physically.  If there is an aspect of the hunt he can control, no matter how seemingly minor, then he controls it and masters it.”

With as many mentions about legendary western bowhunter Randy Ulmer , this section wouldn’t be complete without getting some words of wisdom from the master himself, and what he shared with somewhat surprising. Randy Ulmer admits that he in fact “gets nervous” when it comes down to crunch time. He also had an interesting take on the theory of a bowhunter going into autopilot mode at the time of the shot and said this, “In my mind I don’t want to go on autopilot when making the shot. To use that metaphor of flying, the lethal shot on a game animal is like the landing of an airplane, and if you are on autopilot you will crash. In my opinion you have to be aware of everything and still make the shot. It is okay to be scared and nervous and it is what you do at that point with that is what I call ‘Courage under fire.’ One thing that helps me is I admit that I am scared and yet do the best that I can, and just understanding that fact really helps to calm me down.” Randy continues to explain, “For me being prepared comes from the mistakes I have made in the past and learning from them. I try and leave no stone unturned especially my equipment.”

As we were wrapping up our conversation, Randy paused and said, “I feel like I need to share one more thing.” Randy had my full attention as I leaned in as if I was about to receive the Holy Grail of archery.

Driving home the point, Randy cleared his throat and went on to emphasize, “There are a lot better hunters and archers out there than me, but the difference is at 40 yards I hit what I shoot at!” He went on to clarify, “I am not trying to be a braggart or egocentric but the importance of a lethal shot over missing or wounding an animal is huge. You have to be able to shoot accurately to consistently kill trophy animals.”

These incredible insights by some “GIANTS” in the sport of bowhunting, if taken to heart and adpapted to your arsenal can help you too become a 10 percenter!