by Trevon Stoltzfus
in Bowhunting Posts
0 0
1 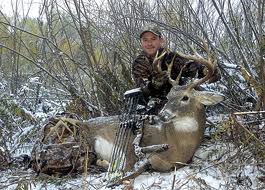 In this last characteristic I found a quality in common that I did not expect. To be honest, I would have “bet the farm” that consistent hunting tactics would have been what has paid off so big for these bowhunters over the years. The opposite was true and many of the bowhunters I interviewed attributed much of their success to their aggressive adaptability.

Mark Kayser explains, “I tend to toss tradition out the window. Instead of following what books, magazines and TV shows tout as the best tactic, I’ll break the rules. I love going on the ground for whitetails, especially during the ruckus of the rut. If the elk aren’t cooperating and coming to a call it’s a no brainer for me. I go to them and try to sneak in as close as possible. I also enjoy deceiving animals with calls and decoys and oftentimes not in the manner described in the instruction manuals. I once decoyed a whitetail from the ground by sitting in standing corn, rattling, grunting, thrashing corn and moving the decoy. A buck saw the commotion out in the picked portion of the field and ran straight to the edge giving me a 20-yard shot.”

JT Harden, co-host of the popular Hardcore Hunting TV show on the Pursuit Channel, attributes a lot of his success to his adaptability and says, “Your reaction to the animal and the situation is critical. You have to have the ability to change your tactics quickly no matter what happens.”

Over the years I have seen many unsuccessful hunters that sit the same treestand or sit over the same elk wallow because 6 years ago they took a buck or a bull from that position. By being flexible, reading the animal and making the necessary adjustments in your calling, hunting strategies, or hunting area, a hunter can be more of a predator, than simply a creature of habit that leans heavily on luck.

Conclusion:
In my experience, as I look at these 5 characteristics of highly successful bowhunters, I can honestly say that in some way or another I incorporate them all in my bowhunting. But some, I find, are much more easily implemented while with others take work. For me staying motivated and thinking out of the box (Aggressive Adaptability) takes a certain amount of mental focus that doesn’t come naturally. By concentrating or working on the weaker part of my “game” I have seen an amazing increase in readiness and ultimate success in the back country.

This journey of understanding the mind of a successful bowhunter has been a voyage of over 10 years. No one can deny that there is a drastic difference in the bowhunter that consistently takes trophy animals, and the ones that don’t. With the traits and characteristics I have shared in this 5 part blog series, I hope to bring each one of us closer to understanding what it is and what it takes to be a “10 percenter.”

For more information on Trevon Stoltzfus and to see exciting western bowhunting webisode action visit his website at www.outbackoutdoors.net.
For questions and comments email Trev at trevon@outbackoutdoors.net