by Roy Goodwin
in Bowhunting Posts
0 0
A A
1 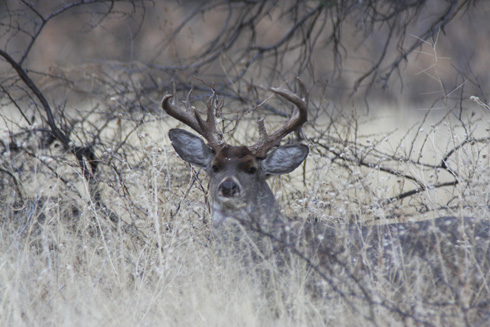 The reason so many record book deer are taken each season is not that they are easy, it’s that many more bow hunters spend many more days a field in their pursuit of whitetails than all other species combined. It gets to be a numbers game, with two and a half million bow hunters focusing the bulk of their hunting efforts for up to five months each season on just trying to take a trophy whitetail, some are just bound to end up on meat poles. The overall success rate however (of taking a record book buck with your bow) is extremely low.

The obvious question is, “How do I improve the odds of being one of the relatively few bow hunters that succeeds and harvests a whitetail that makes P&Y minimums (or better!)?” There are so many potential answers to that question that it’s hard to figure out where to start, but careful planning has to be high on the list.

In my last column I discussed the importance of finding a place to hunt that actually holds trophy class deer, and touched on the importance of setting goals and taking the first buck that meets your goals and provides an opportunity. Those things are part of the planning process, but you can fine tune things from there to improve your odds even more. Perhaps the best thing would be to give some examples:

One of my personal goals is to harvest a record book coues whitetail with the bow. I tried last January, but didn’t get the job done. It wasn’t that I hadn’t done the proper planning, heck I was with a great guide, in a real good area, and hunting during the late season rut. My outfitter had near 100% success with bow hunters for six years running, hunted out of ground blinds, and his area holds a pile of deer. Not only should it have worked, it actually did work, well almost!

I did end up with a perfect shot opportunity at a buck that would make P&Y minimums at 21 yards…..I just chose to not take the shot! Sounds dumb, doesn’t it? Well “the rest of the story” is that this buck was a decent six point that was traveling with an awesome eight point which was standing just out of range behind some brush the entire time the six point was “teasing me” with a perfect shot opportunity. I decided to just wait the big guy out, and if it meant eating “tag soup” at the end of the trip, so be it. And, so it was!

I had a great hunt, and more importantly, I learned a lot from the experience. The net result was a lot of planning for the coming season to improve my odds. There were only two problems with this hunt last season, I only had one tag and only five days to fill it. If I had a second tag, I would have taken the six pointer to have the species, but still been able to keep trying for a bigger one. Also if I had more days it would obviously have increased my chances. I wanted to stay with the same operation because I know first hand he is honest, hard working, and in a great area, but he only offers five day hunts. Also Arizona only allows a hunter to have one buck tag a season…..what to do?

I talked the outfitter into an experiment where he’d offer a very special hunt to a very limited number of bow hunters this coming season as a test. We combined two five day hunts to make a ten day package, which solved the problem of more time in the field. Then we booked the last five days of December and first five days of January so we’d be doing one hunt that spanned two seasons. The deer tags that time of year are sold “over the counter” so we can purchase two tags (one for the first five days, one for the second). To further increase the odds the outfitter agreed to only take four clients for the ten day package, rather than the six per each five days, and he agreed to set up twice the number of blinds and increase the area he hunts to include ground that he hasn’t hunted in the past. Our goal will be to harvest a decent P&Y trophy each in the first five days and then settle in and try for a “monster” with our second tags. As good as this all sounded it got even better when the outfitter offered a special discount to our group this first year to make sure we filled all four spots with serious trophy bow hunters. He is looking for pictures of some great bucks on the ground to promote this special trophy package in the future.

Here is another example: I’ve been working with a great outfitter in Illinois for years. We’ve become good friends and I’ve sent him a number of clients over the years. I hunt with him every fall and most seasons pass up opportunities at under twenty yards on bucks in the 125-135 range. While these are great deer, my goal is bucks over 150, and I know they are there so I gladly pass these smaller ones waiting for a bigger one to make a mistake. I told my friend that I wanted to increase my odds, and we worked up a plan. He has kept his eyes open for a new lease opportunity that might provide an even better chance at even larger deer (his operation averages 40% success on P&Y deer each season with a much higher percentage of shot opportunities and sightings). They also take a few Boone and Crockett bucks every season, so they are in the right place, and do know what they are doing!

Last season he was able to secure a new lease on a timbered property that had not been hunted in thirty years. He got the lease too late in the year to scout the whole thing so he just scouted one corner and put a few clients in to “test the waters”…..the test went very well indeed! They ended up taking three B&C bucks off that lease last season and saw several more that never got shot at! I went out this spring and did some shed hunting/scouting on the property and was “blown away” by what I saw. The frosting on the cake however came when he was able to lease the 180 acres next door, which seems to be the main travel corridor to/from this timbered piece to a lot of farm land near by. By being in the right place, at the right time, and working on a special set up, I found myself and a friend the opportunity to jump on this lease and have exclusive control of it going forward.

Next month I’ll share some other ideas that might just help you plan your special hunt. In the mean time, if there is a serious trophy bow hunter reading this column that has yet to take a nice coues whitetail, email me…there is one opening left to join my group on this very special hunt.