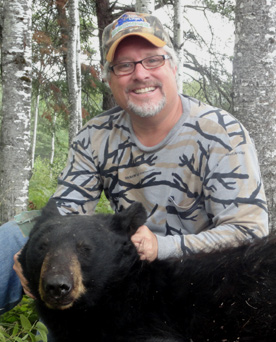 Robbie Cramer with his 2011 black bear on the Bowhunting.net online bowhunt with Fred Lutger.

Every year Fred Lutget and I bear hunt together. We take turns videoing each others hunts. The previous year I videoed Fred on his first hunt, so this year it’s his turn to video me.

We arrived at the area Fred calls HorstTail 4 hours before sunset. 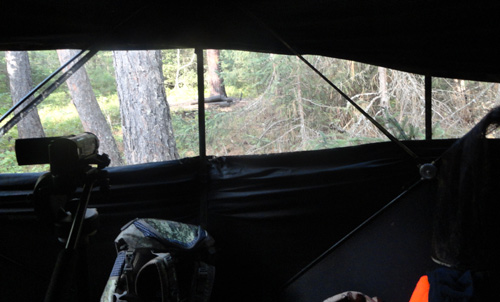 Normally when we get into the Double Bull blind we arrange our gear and sit down. But not today. The first matter at hand was yanking out a ThermaCELL out and turning it on. The mosquitoes were that brutal.

At 6:00 we spotted a large bear’s ear and half its head 80 yards back in the thick woods. The bear was cautious and it took half an hour to be in our immediate area. It stopped 30 yards from the blind and stood in the thick cover.

Then it walked away. And that was the only bear we saw.

Meanwhile, my hunting buddy Robbie Cramer was having good luck, too.

Robbie Cramer came up before the hunt to help set up camp and do the “get ready” work for the other bear bowhunters.

I brought three SpyPoint game cameras and one Moultree camera and Robbie and I  set the cameras out and reviewed the pictures daily.

Robbie liked the set up at a site called Hose and the SpyPoint pictures told a story of good bear activity, especially during daylight.

He and I set up a Primos Dark Horse in the forest cover that would give Robbie a 10 to 12 yard shot when a bear came to the bait site.

Just as Fred and I did, Robbie got his ThermaCELL going and then eased back in his chair at the back of the blind. Then he used his Nikon rangefinder to get the ranges of other possible shots, in case a bear didn’t come to the bait.

At about the same time that Fred and I saw a bear, Robbie had a bear walk up from behind him. He recognized this particular bear from the SpyPoint pictures; a blonde color phase bear with striking brown and blonde markings on its body. 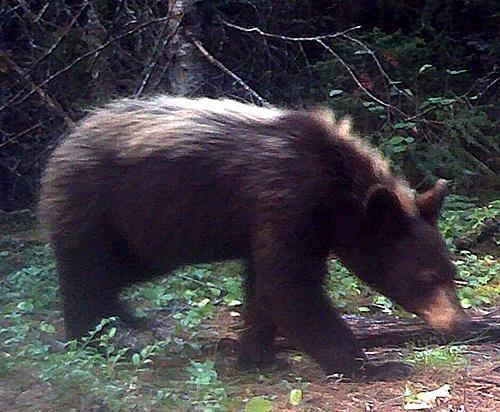 The color phase bear was still a young bear and Robbie watched and enjoy it. After awhile the bear did something unexpected.

The bear suddenly took notice of the blind Robbie was in. It took a few steps toward the blind and watched it intently. Then it came closer.

And then it came to the front of the blind. Robbie saw the bear’s nose slide in under the bottom of the blind. Then the bear pushed around on the blind … and then stuck its head in the blind’s main shooting window.

Robbie set rock still and the bear checked out the inside of the blind. Then the bear returned to the bait. Ten minutes later it went on alert and ran down the trail Robbie had walked in on. 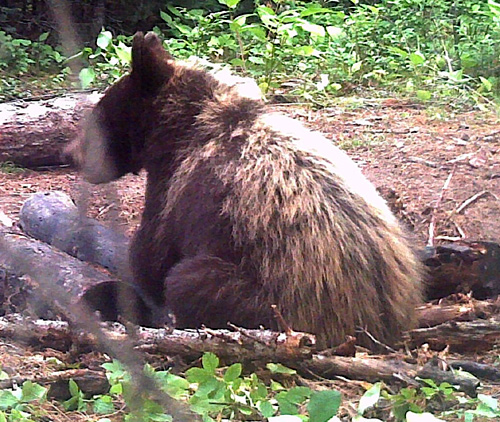 If there was ever a testimonial to the effectiveness of the Double Bull ground blind this is it. The dark interior makes the hunter inside unseen. Even if a bear is looking in the window. Truly amazing.

A mature bear came out of the woods and went to the bait logs. 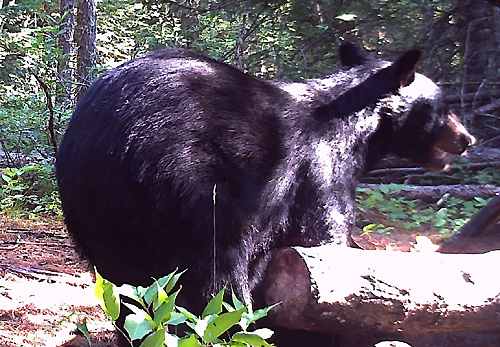 Robbie has taken 2 bears and is looking for a larger one than last year’s bear. And this bear fit those requirements. 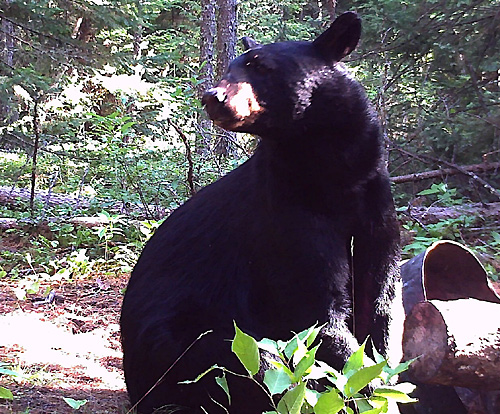 Robbie waited for the bear to turn broadside. When it did he drew and took aim at the bear’s vitals. He released.

On impact the bear bolted into the woods and piled up. When he bear or deer hunts Robbie takes a Pro-Ears with him so he can hear everything around him clearly. As the bear ran away Robbie quickly put on the Pro-Ears. He heard the bear crash on the ground and then Robbie heard the distinctive death moan.

After waiting 15 minutes Robbie got out of the blind and went to his arrow. It was covered with blood … and a super blood trail led Robbie to the bear in 40 yards.

Robbie Cramer had taken his biggest bear to date and also the first bear of this hunt. But it wasn’t the only bear tagged today. There were 3 more bears down.