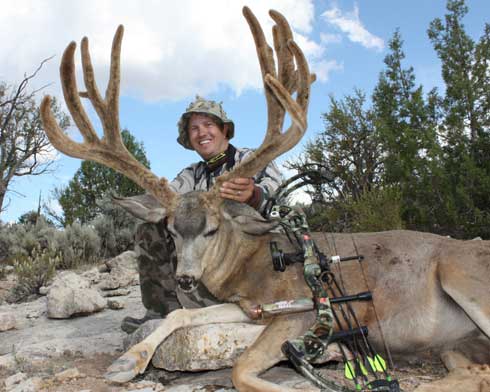 Several months ago I published a story on ‘deer’s sixth sense’ in Bowhunter Magazine. That story discussed the fact that animals, including humans, give off energy that other animals can detect.

I was at the Pope and Young Club 50th anniversary Convention in Rochester, MN. It was a fantastic event and as enjoyable a time as I can remember. Anyway, while there a member from the West Coast came up to me and told me how much he agreed with the fact that deer (and elk, etc.) do indeed have a sixth sense. He then went on to say that when he discussed this article with a local wildlife biologist, that person indicated that I had written the article that promoted the new clothes made by the Human Energy Concealment Systems folks to prevent energy detection, just so I could get free clothes. In other words, I wrote the story so that I could get that new product.

There are several points I’d like to make about what that biologist said about this writing biologist. First, at my age, I need more camo clothes like I need a hole in the head. I’ve got more ‘stuff’ than I can ever wear. I used to give things to my University wildlife students, but now that I’ve retired, those clothes just accumulate. Second point. This outdoor writing business is very competitive, but it’s a small world. If you as an outdoor writer make idle statements about guides and hunts, bows, other outdoor products, just so you can get a free item, or hunt, or whatever, and those items or hunts are bad, your name goes down the toilet.

Yes, in the outdoor writing game, your name is your word. If readers learn that they cannot trust what you write, you are finished. I’ve been writing for 41 years, and I work hard to keep my name clean. I can think of several well known outdoor writers that are gone from the printed word because they endorsed products or a guide, that just weren’t worth a salt. Doesn’t mean that everything I write is perfect. But it does mean that I try hard to protect my name.

Now relative to the fact that animals may have a sixth sense, the truth is that for over 80 years we’ve known that humans give off energy that is measurable. Just look at the many cultures where ‘human aura’ plays a major role. True, there was a time when we, and our medical community, thought that this ‘human aura’ thing was just a bunch of hooey, but now we know better. In fact, I found one 1991 article in the Journal of Bioelectricity that stated that some humans have more sensitivity to electromagnetic radiation than others. Could this also mean that some humans give off less radiation? Does that mean that some really good hunters can lay part of their success on the fact that they give off less energy that deer can detect? Food for thought.

Here is what else we’ve known for years. There is something called Faraday’s Cage (just google it to see it) that can be made of solid metal or just a metallic mesh. Put a human in this Faraday’s Cage and it prevents electromagnetic radiation from being detected outside the ‘cage’. This is fact. You can measure it.

It was this phenomenon that caused Mike Slikard, bow string manufacturer extraordinaire at Winners Choice, to produce a line of clothing with some metallic mesh that decreases your chance of being detected by animals.

There is no question that animals sense electromagnetic radiation, and no question that we give such radiation off our bodies. There are devices that measure what we give off. And there is a metallic mesh that reduces this radiation. Seems to me that the HECS folks are on to something here. And if you go to their website, www.hecsllc.com, you will see some data on this concept. And more scientific studies are being conducted by people who dive in shark waters, dog trainers, etc.

I understand the skepticism that will be out there. Yes, I killed my biggest buck without scent or energy reducing clothing. I know many bowhunters who kill monster bucks year after year with no camo, no scent reducing clothes, and of course, no HECS clothes. And they’d continue to do that because they watch the wind and scout a ton. Most of the truly great deer hunters are successful because they work harder than most hunters.

I hear the jokes about putting aluminum foil over your head, and whatever. I understand all this. Everyone is different. There are many really good bowhunters who don’t use compounds or sights or camo. They never will and that is what makes this world go round. My point is a simple one. From a scientific perspective, it sure looks like deer have a sixth sense. And it sure looks like the metallic mesh clothes made by HECS will work to reduce that. Does this mean that everyone ‘needs’ to rush out and buy some? Of course not. However, there are many bowhunters that just might benefit from wearing such clothing.

Even if you don’t want to buy more clothes, just considering the above may change the way some of us hunt. For example, consider this study (‘The human electromagnetic energy field: Its relationship to interpersonal communication.’ Journal of Theoretics 4 (2), 2002). This paper talks about the way that our thoughts and emotions cause electromagnetic changes in our bodies. Maybe my comments earlier about some hunters being better than others because of their electromagnetic radiation. Just maybe controlling our emotions when a deer approaches also reduces our energy that helps a deer detect us. That’s what this scientific paper says. Are hunters with more experience around big bucks calmer when those big guys stroll by than young hunters? Probably. The science than says that those calmer hunters give off less electromagnetic radiation that can be detected by animals.

Will we ever have data that measures the differing amounts of radiation given off by a human and also then measures the differing reactions of deer? Probably not. And I’m not sure I ever want deer hunting to be that scientific. In fact, I know I don’t. However, there is a lot of food for thought here and over the next few years, we’ll hear more and more about it. Do clothes ‘make the man’? Maybe for some they do. And for deer hunting, maybe such clothes are just another piece of the puzzle.

For more go to: HECS or shop Amazon below!