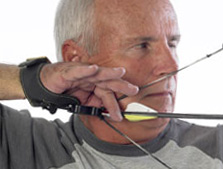 Here’s an interesting idea I’ve been fascinated with for a long time: Is there some way for a bowhunter to shoot a longer-draw-length bow without it affecting his shooting form, allowing him to shoot an arrow with more speed and energy but without sacrificing accuracy?

I think I may have found it, and while I am not given to superlatives, I believe it may be among the most important inventions in archery since the compound bow. It’s the Equalizer™ mechanical release by Goat Tuff Products.

Here’s how it works: The Equalizer is designed with a pushbutton trigger at the front and the jaw a couple inches behind the trigger (toward the wrist) as opposed to in front of the trigger like other releases. It effectively increases the shooter’s draw length by up to 3 inches, maybe more, compared to the release he is used to.

So how well does it work? I ran it through some tests and was impressed. I took my current go-to bow, a Bowtech Invasion set at 28/50, and using my regular release, shot some 420-grain arrows through an Easton chronograph. My average speed was ‘254’ fps.

Then I let the draw length out just a couple inches, to 30, and using the Equalizer, shot the same arrows at the same draw weight through the chronograph. Average speed: ‘274’ fps.

We all know what radical lengths bowhunters and bow companies will go to pick up that much arrow speed. It is hard to do and when it does happen, it is usually with tradeoffs. So the logical question is: Is the release tricky to use or otherwise hard on accuracy? Not for me. I love it; it gives me a more solid anchor point and the trigger is very crisp. I thought the bowstring might brush my face, but it doesn’t happen. With this release not only am I shooting faster, I’m shooting better.

Judging by the name Equalizer, the company seems to think the selling point is that this release can put a person with a short draw length on the same level as a normal draw-length shooter. But the benefits of this release go beyond that. It can help a person who needs to drop down in draw weight because of a problem (such as my personal right shoulder) keep his arrow speed up there. And I think it’s obvious that anyone can just plain get better performance with this release than those that take away from your draw length. I can really envision everyone using a release of this design in the future.

For more info on the Equalizer, go to:  www.goattuffproducts.com. Check the video of my testing on: bowhuntingworld.com.