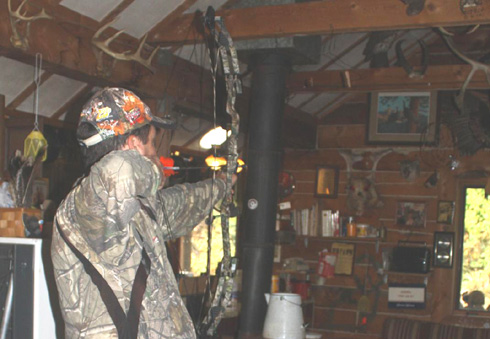 Frank draws back.... ready to shoot the cabin.

My pal Dick Mauch enjoyed telling this story to mutual friends recently and got lots of laughs, including alot of laughter from archery collector Wade Phillips. It is about the time I missed a log cabin, from the inside. Yes, from the inside. Luckily there were only three witnesses to this story, Dick, his wife Carol, and myself. However, since the story is getting told I decided perhaps I should tell it in my column. I know my pal Dick will laugh when he reads this. 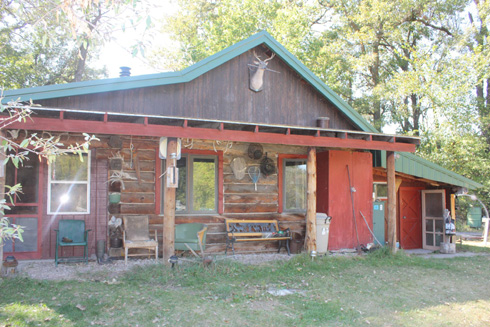 Last Fall I bowhunted at the Mauch’s Plum Creek cabin North of Bassett, Nebraska. I have written about this famous cabin many times, including my “Plum Creek Memories” column last year. Fred Bear, Earl and Ann Hoyt, Ann Clark, Ted Nugent, Glenn St. Charles  and many bowhunting greats have hunted there. I believe that there have been 12 Archery Hall of Fame inductees hunt there over the years. Anyway, the cabin is full of reminders of these greats– from tokens left behind like arrows, etc to signatures, and other items. There are many quiet reminders of these archery greats.

In 1982 Fred Bear shot the outside of the cabin over the front door. In 2010 Dick asked me to shoot an arrow into the interior of the cabin. So one morning after a turkey hunt I came in for lunch and Dick showed me where he wanted the arrow. I was supposed to shoot it near the “Borkle”, an animal that hangs on the far wall near where Fred was photographed on the couch with Dick and Carol’s dog.

I’ve seen that photo many times. Anyway, the Borkle is made from cow bones and I was looking at where I didn’t want to hit… the Borkle. So I drew my 60# bow back and released the ACC arrow with a 145# grain Muzzy head. The arrow hit the Borkle with a loud “whack” and bounced around. Dick was shocked… who misses a cabin from the inside?!?!?

So when the laughter faded, I asked Dick and Carol for a piece of chalk. I drew a quarter sized circle in the center of where I wanted the arrow to hit. The second shot nailed the spot! The Muzzy head buried in the log and I signed the arrow and numbered it.

I told Dick that his cabin was the first Pope and Young cabin I’d ever shot. He reminded me that Fred was actually the first to shoot the cabin. I grinned and said, “Yeah but mine scored more. You added the porches after Fred’s shot so mine was a non-typical and scored higher.” We all shared another laugh after that.

So while it is true I have made some great shots with my Hoyt bow, I have missed one or two in my day too. I may be an Aspirin Buster but even a professional has bad day now and then. Thanks to friends like Dick and Carol, I remain humble and am reminded that I once missed a log cabin from inside the cabin.