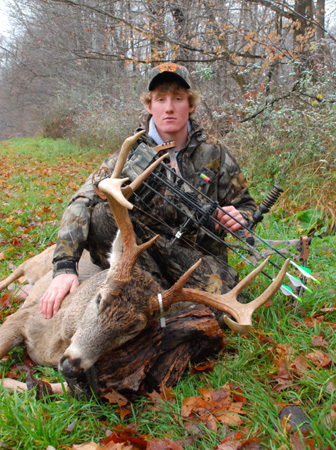 Your treestand location will eventually get contaminated with human scent if you overuse it. Set multiple stands and shift your location based on the wind.

If someone tells you that scent control is easy… they’re lying to you. We bowhunters are confronting the best scent detector on the continent, the whitetail deer’s schnozzle, and we are on their turf. In addition, they can see into the UV-spectrum, something we can’t do. Whitetails are not only packaged to survive as a prey species but they have had thousands of years to hone their skills and collective avoidance techniques against their number one predator…you.

Here is the summary of our challenge. Science tells us that a whitetail can detect and ID at least six unique smells at once. Those six may be ripening May Apples, a freshly cut hay field, a passing coyote, a Morel mushroom, a doe that recently walked this trail and you. At this point, the game is over.

Science also recently postulated that a deer has the unique ability to interrelate odors. Think of it like this, as kids could relate the sound of dad taking off his belt with a soon to come bad situation. Deer seem to have a similar ability. This ability to interrelate events and smells means this to we bowhunters; our mistakes can be hooked to smells in a whitetails world. Let’s imagine a simple mistake, like not wearing gloves while trimming brush around our new treestand location.

Our hands inadvertently touch some tall grass along the deer trail. While this may seem innocuous to a novice, a seasoned whitetailer knows that he just left skin cells laced with human specific bacteria on those wands of grass and they are positioned at nose level to a walking whitetail. The deer may walk along that trail two hours after you leave and spend considerable time in a state of semi alarm.

He will likely check the trail with more focus and if this place, right under your new treestand, smells enough like trouble that buck you’ve been working on will avoid this bottleneck under your treestand just because he can. If he also smells the cover scent brand your using he can interrelate the two smells in the future to mean danger.

Likewise, if you were eating a banana for lunch while sitting in your stand and a buck walked up on you from behind, spotted you and connected the unusual smell of banana mingled with humans he’d log the event in as a bad one. If he encounters the alarming sequence again or just part of it, maybe he encounters a banana peel on a trail in the future but no human, he may react with alarm…even if he is walking a different trail two years from now.

This scenario is even more real world than bananas. Say you use a specific brand of deer lure on your mock scrape. A buck comes in to the scrape just after you head home at dark. He smells your human odor and the Jinks Brand Doe in Heat lure your using. He connects the two smells and avoids areas smelling of that brand of deer lure. This is the new “Interrelating Research” at work. These are combat-trained whitetails. They avoid us humans for a reason. We are their worst nightmare.

So, how do we combat the nose of a whitetail? If you remember and employ these four buck steps. You’ll increase your odds considerably.

1. Wash your clothing in Sport-Wash. Why? Because it is the only detergent that rinses completely out of the fibers of your camo. The Clemson University and more recently the number one micro-lab in the nation has shown that detergents leave a smelly residue on your clothes after washing. Sport-Wash rinses out and takes with it smelly human odors.

2. Wash your body with Sport-Wash Hair and Body Soap. Why? Because it is scientifically engineered to pull human odor from your skin and it too rinses completely and doesn’t leave a smelly soap residue to alarm deer.

3. Spray down with a bacteria killing spray. I suggest N-O-DOR spray. It is science in a bottle. It is the only scent suppression spray that uses the chemical process of oxidation to render human odor inert. The best use of N-O-DOR spray is to spray down your naked, Mr. America, body with it after taking a shower and before toweling off. Then towel off and get dressed in your clean camo. Human odor is largely human specific bacteria decomposing and respiring on your skins surface. N-O-DOR hammers the bacteria and eliminates the issue.

4. Solid research has pointed to the fact that deer see into the UV spectrum. For years, we’ve understood this to mean that deer can see the reflected UV signature of brighteners in your camo. The science says deer see this as a glowing blue object in the woods. That blue blob is you if your camo has UV-brighteners in the fibers. The only way to address his issue is to treat your camo with UV-Killer. One treatment lasts a lifetime.

This Four Buck Step process will give you an edge in the whitetail woods. You can’t afford to be sloppy when you’re pursuing the animal behind best nose in the business. The only thing a whitetail can’t smell is nothing.

Do the Four-Step this fall by starting here: www.atsko.com