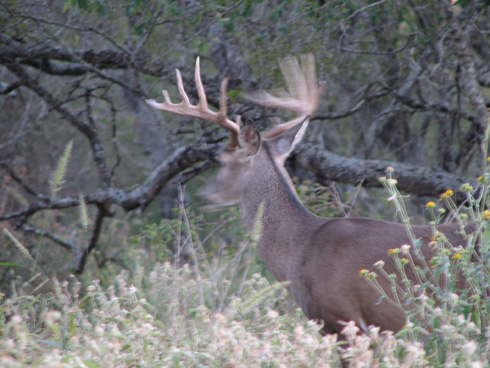 This blur is all you will see of that big buck if you don't address the scent suppression issue with a workable solution.

Whitetails have not gotten any better at detecting us over the years. They are still amazingly good. The only thing that has changed is that hunters and we biologists have learned more about how whitetails detect us. The effectiveness of the olfactory receptors in the nose of a whitetail out-paces the nose of a bloodhound and makes our noses seem non-functional. They can also smell up to 6 odors at once and remember them in association to events or situations.

This is a high tech nose.

It is believed that the majority of a whitetails communication and environment assessment may be taking place via scent. With a sense of smell this developed, it stands to reason that we have a major obstacle to overcome in order to fool that nose and get within bow range on an unalarmed deer. One often-overlooked dimension of our scent footprint is the residue left in our clothes after we wash them. The source of the residue (soap scum) is the detergents we use to clean our camo.

I recently spent some valuable time at the number one micro lab in the nation in Pittsburgh Pennsylvania. We were doing some testing of detergents and the residue they leave behind after washing. The fibers of the fabrics we were working with vary in size but is on average very small. Some are many times smaller than a human hair. Some are so small that only with an electron microscope can you see the detail and any residue left after washing.

We were looking for detergent residue because our research has shown that residue can affect the performance of the fabric and emit an odor. Logic says that if the fibers in a 60-40 poly jacket are dirty then the ability of that fabric to repel water is compromised.

Likewise, if the fabric is designed to wick, (draw water out along the fibers), it will only do this if the fibers are clean to allow water transport, as the mechanism at work here is a water transport characteristic called capillary action. Wicking keeps you dry by moving water (sweat) away from your body so it can evaporate. These are all fabric performance factors that can be compromised by soap scum, but let’s focus on odor.

Our testing suggested that there is likely a compounding effect related to soap scum build-up. In the same way a candle gets larger every time it is dipped into the wax it appears that fibers may be collecting soap scum in a similar fashion. This candling is a real problem if the scum is also giving off an odor. Although that odor may not be human odor it is still a foreign smell to a whitetail and one he may associate with you.

Since we agree that smelling like a box of detergent in the whitetail woods is a poor idea, let’s see how the proper detergent may give you an edge.

We washed our samples in the most popular detergents sold in the hunting stores.  Although they seemed to do well to the naked eye, the close-up view showed the real deal. Only ATSKO’S Sport-Wash both cleaned and rinsed scum free. This is important to you because having detergent scum left in your clothes will compromise scent suppression efforts.

Examine the electron microscope views of clean cotton fibers. Notice the ragged appearance of the natural fibers that make up cotton. We assumed that the rough surface of natural fibers is a likely surface for soap scum to adhere to, and it was. Camo washed repeatedly in a detergent that doesn’t rinse out of the fibers well yielded a result that got scummier with each washing. More scum attached to the fibers means more odors. The research was telling and confirmed what we suspected after similar testing at the Clemson University’s School of Textiles.

So what does this mean to we hunters. It tells us that choosing the detergent you’ll be using when washing your hunting clothes matters. We all agree that scent suppression plays a major role in our success in the whitetail woods and managing your clothing is an important step. To see High Tech Testing video click: High Tech Bucks
for more also go to: ATSKO