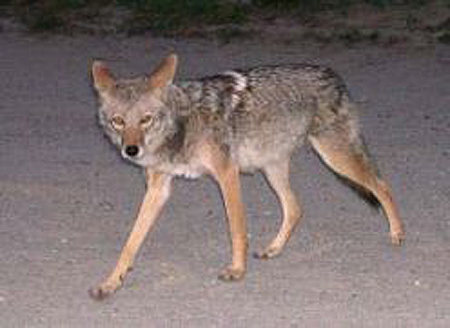 Within the last year, it’s been reported in the news media that a coyote was spotted in a suburban area. They began to put pictures in our mind that we could be attacked or even killed by these predators. Nothing could be the further from the truth.

First thing of importance to know is how to distinguish a coyote from a household pet. You will find their upper body is a yellowish grey blend and the fur covering their throat and belly is white to a cream color. Unlike dogs droopy ears a coyote’s stand straight up and are pointed. They have a long bushy tail with a black tip. Coyotes from end of tail to tip of nose can reach up to four and a half feet and weigh up to around 45lbs. Normally, the bigger coyotes are the females. Here in Michigan we deal with the Eastern Coyote which are nearly twice as big as their cousins out west. Coyotes are social animals (not with humans) and will pick a mate for life. Some believe coyotes travel in packs but unlike wolves do not. They however, have been known to travel in family packs with the male, female and the pups.

Your odds of seeing a coyote are more so during the breeding period occurring from January into March. Once fall approaches the pups begin leaving the den and wandering. Although active both day and night coyotes are more active at sunrise and sunset and will normally feed at night. That accounts for a lot of people seeing these animals, heading to work or late evening while taking out their household pet.

Coyotes are opportunists. They feed on garbage we leave out and they normally will kill small game such as rats, mice and rabbits. They will kill small dogs, especially if they seem injured, weak or are tied up. So, it is a good idea if you have coyotes in your area that you keep an eye on your pet when they are outside chained up.

Coyotes will also learn to kill livestock such as calves, goats and sheep. Larger animals almost always need to be dead and decomposing before coyotes will eat them. Sightings have been reported of a family of coyotes bringing down a deer and normally this will be a very young, old or injured deer.

The odds of being attacked by a coyote are slim however attacks do occur. You are more likely however, to be attacked by a stray house dog then a coyote. These animals are very skittish and if they sense anything wrong or out of place, will be gone in a heartbeat. There was a recorded attack in Canada some years ago of a runner being attacked by coyotes. It appears that this isolated incident, however after some investigation it was concluded the pack of three coyotes that attacked and killed this girl were hybrid coyotes that had bred with wolves. Coywolves, the result of wolf/coyote offspring are much larger and more aggressive then standard coyotes and have a head similar in shape to a wolf. They are also known to hunt in packs like wolves. The runner also made one fatal mistake that we are all prone to do in this type of situation and that is to run. Running triggers the predator sense in almost any predatory animal.

To avoid drawing a coyote into your area take precautions to not leave trash and garbage out any longer than needed. Clean up brush piles that may attract rodents and small animals. Don’t leave your small pets outside for extended and unsupervised times. If these things are not available coyotes are either forced to move on or stay in the woods.

If you see a coyote, chances are it is trying to either get back to its den or has been scared out of another area. Also remember, it is more afraid of you than you should be of it. Last but not least, never approach a sick coyote or any other animal for that fact. If you are having issues with a coyote or another animal here are some agencies to contact: