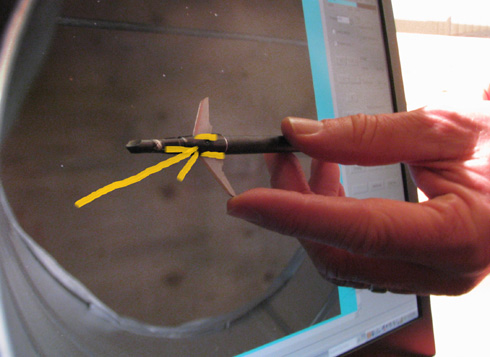 Notice the long bearing surface (Yellow) where the blades are resting against the ferrule. This engineered support means the blades won't fail you in the field.

My first whitetail fell to a Bear Razorhead. That was back in 1971 before broadhead science had crawled out from under the rock. Today the choice of broadheads is astounding. Although there are dozens of fixed blade designs, the real breakthrough occurred when the mechanical head was developed.

Mechanicals were introduced to solve an important problem that plagued winged broadhead shooters for decades. With wings (protruding blades) up front on an arrow, we suffered an aerodynamic issue of control loss. The broadhead blades were competing with the fletch to guide the arrow shaft. Arrows grouped like a flock of ducks. Grouping is a foundational concern. We are talking about accuracy here.

Accuracy:
In the early days, accuracy was so bad with some fixed blade broadheads that it was almost imposable to control the arrow flight. I remember shooting some fixed blade heads that would randomly scatter in a 10-inch circle at 20-yards. We used to address this erratic flight by adding fletch-drag. Feathers were a favorite solution. I know guys who shot 4 5-inch feather fletch to get arrow control. Of course that fletch slowed down the arrow considerably. It was like putting a longer heavy tail on a kite.

To address the winged flight failure of broadheads some manufacturers went toward the micro-head. Their solution was to shoot a tiny head, with tiny blades that made a small cut. That’s a bad idea because it’s the cut that kills. Blade size is a bad place to compromise if ethical harvest is important to you. They did fly better but so does a field point. Actually, most fixed blade heads still fly poorly compared to a mechanical.

The real solution is the deployable broadhead or mechanical. Now the blades could maintain a low profile while in flight and open once they get to the target. Swhacker Broadheads contacted two of the most respected world champions on the planet, Levi Morgan and Colin Boothe and had them conduct accuracy testing under various authentic field conditions. The result was two testimonies that carry weight. Both of these champions have chosen to shoot Swhacker Mechanicals. They contend that they shoot just like, exactly like their field points.

Penetration on Angled Targets:
While guys like to argue that some mechanicals don’t open, I believe that the real problem with some mechanicals is blade integrity. I’ve done the testing and the angle of blade contact combined with engineering is the real bottle neck for some heads. A dependable mechanical must clear a number of hurdles to be considered effective and reliable.

Some mechanicals fail simply because they lack design integrity. The tip forward design, when incorporated in to a broadhead design allows for “Tip Guidance” upon impact. The arrow follows the tip during penetration. Whether the tip is a Trocar design or some tiny blade, the performance is limited to the broadheads tracking ability to vector into hide and flesh. If the designers failed to understand this design attribute, you get a head without a long tip forward. These snub nose heads deflected consistently in our tests. They failed repeatedly on the angled plywood test and again on angled bone.

On a whitetail, this is a real issue. The deflection problem is the result of unopened or opened deployable blades cantilevering the head and redirecting the arrow away from the impact location. The result is deflection, sometimes with a long non-fatal slice left in its wake. Some popular mechanical broadhead designs failed the angled plywood test because of this flaw.

You can gauge the angled performance by balancing a broadhead’s tip on your hand and angle it to discover when it will be cantilevered away from the target.

Blade Integrity:
The other major flaw we discovered on many mechanicals during our testing was blade integrity. When you look at a broadhead’s blade design, it is easy to spot a weak design. If a broadhead is depending on unsupported thin willowy blades or blades that are cut out like a plastic flyswatter, you can be sure that there will be blade failure in some circumstances. Blade failure means the broadhead failed to do its job of cutting flesh and organs.

One mechanical broadhead outperformed the others in blade integrity and the reason was because of its intentionally supported blade design. The Swhacker mechanical is designed so its blades are fully supported by the ferrule at deployment. When those 2-inch cutter blades scissor open the contact force is triangulated against the ferrule and is nearly indestructible.

Throughout over 50 test shots into a variety of tough targets, we did not have a single cutting blade failure. This means that the 2-inch wide cutting blades will be doing their job once you send it at the target. That means total dependability whether the target is a sheet of 5/8 plywood, bull elk or a mature whitetail buck.

Note how the Swhacker design supports the opened cutter blades along a long stable surface. Even bone and the cold rolled steel of a drum didn’t shear off a single cutter blade. The demanding slow-motion testing was authentic and can be seen at : Steel Drum Tests

So there you have it. Not all mechanical broadheads are equal in design or performance. While most will likely kill a deer, if the conditions are perfect for that head, only one head we tested won the accuracy, angled penetration and integrity test.

For more go to: Swhacker Broadheads