Putting The ‘Buck Stop’ On An Illinois Buck 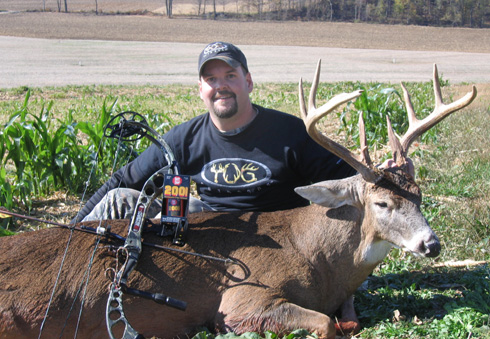 The spring of 2010 started out like all other, in the woods chasing turkeys. It was a pretty uneventful spring and then I got the news, I had drawn a bow tag for Illinois this was a dream come true. I would be hunting with the Lawson family on their farm in Pike County. The summer dragged by as Travis was sending up trail camera pictures of some great bucks, but one buck really caught my eye. They called him the Big 8 he was a regular visitor to the cameras for past couple year, but come late September he would disappear and not be seen during hunting season. I was ready put Buck Stop’s scents to use and try and change his habit of disappearing.

August came around and I made a trip down to check out the property and get some treestands hung. We checked out a lot of great locations but one spot really stuck out to me, it was called the silver barn stand. The location was on top of a ridge between a bedding area and food source. We got it all setup for my camera man Eddie and myself.

As the calendar rolled through September, like in past years the Big 8 disappeared, they were still getting a lot of great bucks on camera so my hopes were high.

October was finally here and I was headed for Illinois! Eddie and I arrived in camp on the 27th and where greeted to high winds and rain. The first day we elected to hunt out of shadow hunter blind with a decoy and using some Buck Stop 200 Proof, as the chase phase was in full swing. We had a couple of nice 2 ½ come investigate, but decided they need a couple of years. When we got back to camp that night Travis had told us that he ran cameras that afternoon and had to pictures of the Big 8, I was pumped up.

The next morning we had the right conditions for the silver barn stand so after dragging some Buck Stop Guide Grade Doe-In-Heat on a drag rag to our stand we settled in and it wasn’t long before a good 10pt came down the trail, I positioned myself for the shot at 40 yards. Buck fever kicked in and I shot right over his back. I was really bumming but Eddie said don’t worry its only day 2. That evening we went and sat over a food source and saw a great 2 ½ yr old 8pt.

October 29th arrived cold and calm, we decided to head back to the silver barn. We sprayed down with Buck Stop’s Scent Stop human scent eliminator, laying a scent trail with Guide Grade Doe-In-Heat. At the stand site I hung a scent wick treated with 200 Proof.

It was going to be one of those days as the sun started to peak over the horizon it was like a light switch was turned on. The deer where everywhere we had some small bucks come by and does were all around us, at one point a doe decided to use our ladder stand as a back scratcher.

I was watching 5 does and a small 6pt playing around when I caught movement in the brush as the buck cleared the brush my heart jumped into my throat it was the Big 8. The doe’s all froze watching him as he stepped out of the cover. The enticing odor of the fresh estrus scent we had applied earlier had caught his attention. Spotting the closest doe he issued a loud grunt, the chase was on he chased them around and around. Finally after drawing on him 3 times I had him at 20yds broadside. I drew my PSE, released the arrow, and it found its mark. The buck ran about 60yds and we watched him pile up, I was at a loss for words. We climbed down and went to retrieve my buck.

I was living the dream hunting in Pike County, Illinois and had killed the elusive Big 8, by playing the wind conditions and using high quality Buck Stop scents.