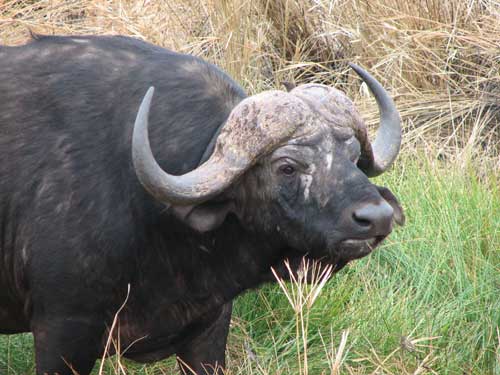 I love waking up to the sound of the African doves outside my window. It was so nice to rest in such a beautiful and relaxing setting, but I was really anxious to start hunting. The trip so far had taken a 180 and turned into something completely different than I had planned. I still didn’t know if I was going to be able to hunt leopard or any other dangerous game on this hunt. I seriously figured I would be heading home empty handed. Frans Troskie was supposed to show up sometime that day to discuss some tentative options but I honestly didn’t see how we could plan such a big hunt on such short notice.

I took some time that day to practice with my bows. My first round had trouble grouping so I went over the equipment and noticed the Black Gold sight had become loose. I tightened it up and was soon grouping tight. Now I just needed to make sure the sight was back in it’s original position.

It was late when Frans finally arrived because his client ended up shooting an elephant with a bow that morning. He told us all about the exciting experience and I was more hopeful about pursuing an elephant with my bow. The client made a great shot and buried the arrow right to the fletching. They didn’t retrieve the arrow until the client had left the country so I got to bring it home and will be returning it to it’s proud and rightful owner!

We finally got around to discussing some possible options for continuing the leopard hunt. Frans had a couple of camps in Zimbabwe located close to where I had previously hunted. It had already been nearly a week of being in Africa without hunting and my return flight was the following week, so we had to work fast. He said the fastest way to get back to Zimbabwe was in his private Cessna 206. He said leopards had been hitting the baits at one of his camps and he was sure we could get one to come in.

It didn’t take me long to think about it. I didn’t want to waste anymore time. I really thought my hunt was already over and I hadn’t even hunted yet. We would leave early the next morning. Being a pilot myself, I knew that we would have to pack light so we didn’t exceed the weight limitations of the plane. I packed one bag to go with me and the rest would be driven up in the following few days by one of Frans’s employees.

We ended the evening with Frans and Sandy teaching me how to play poker. I had never played before but they insisted that I would love the game. I realized quickly that I was going to have to work on my “poker face” being that I couldn’t contain my excitement when I drew a good hand. Much to everyone’s surprise, I won the game that night! They were right….I really like poker.

Bowhunting Safari: Book Your Hunt of a LifeTime