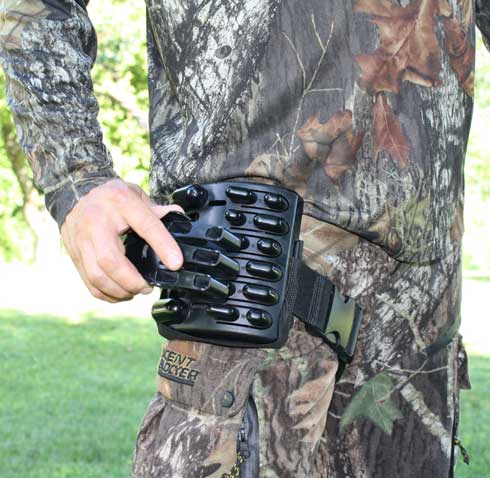 Perfection in sound - ease of one hand operation - attaches to hip for easy access.

RATTLEBOX® – THE EASY, REALISTIC WAY TO RATTLE IN BUCKS.

The Rattlebox® is an innovative new product designed to make rattling in deer easier, with minimal movement and best of all, more productive.

The Rattlebox is the world’s first rattling product acoustically designed to match the frequency, pitch and tone real antlers produce during sparring episodes of whitetail bucks.

The inventor Mike Castner made the announcement:

“Rattling in bucks has become a vital part of the hunting process utilized by more successful, savvy hunters. We developed the Rattlebox using a special polymer material and design that alters the size, shape, flexibility and thickness of material of each individual nodule in the Rattlebox. By engineering the materials and design as we do, we are able to authentically replicate a full range of real antler tones. The authenticity of these tones was then tested and confirmed in a professional sound lab through a Frequency Spectrum Sound Analysis. The Rattlebox is the only rattling product that can show this relationship to real antler sounds scientifically. It’s also the only rattling product with true one-hand operation. With the Rattlebox there is nothing to put down or away, if a buck runs in you simply let it go and take your shot.”

The Rattlebox replicates the sounds made when two mature, full racked 120” class 8 point bucks lock antlers (unlike standard ½ racks from other companies).  The Rattlebox is uniquely designed to be used with either hand and can be worn around leg or attached to a tree and to be used with minimal movement. The Rattlebox can also be regulated for light sparring to major fights.

Castner concluded by saying, “The Rattlebox is guaranteed to sound more realistic and be easier to use than any rattling product available today or we will refund your money.”

Rattlebox®: “If it doesn’t sound like real antlers how do you expect deer to come to it?”

For more go to: Back Mountain Outdoor Products