by Megan McCleary
in Bowhunting Posts
0 0
A A
0 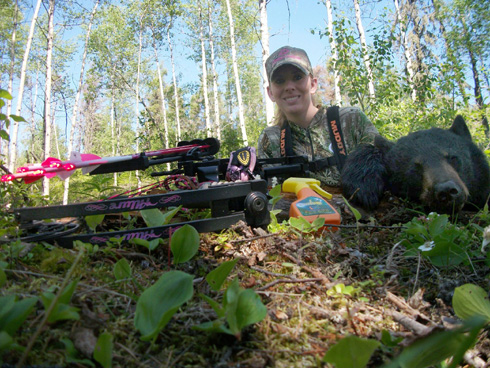 After practicing with my new  Pink Arrow Project Arrow for a month straight I knew I was ready to take on the big Black Bear’s of Northern Saskatchewan. The Pink V-Force Arrow’s are the straightest most durable arrows I have ever shot and only trust them on a once in a lifetime hunt like this one.

The first two days of hunting consisted of getting wet and cold in the stand and jumping in the Rhino Blind when the rain became too heavy. When we woke up the third morning the sun finally started to shine. With the temperatures on the rise, it gave us the hope of finally starting to see some bears on the move. Buck and Eric, our guides at Amyot Lake Outfitters, were excited to see the weather change and got us into the stand as quick as they could knowing the bears would be feeding early.

After sitting in the stand for little over an hour I started to see movement in the thick bush about 50 yards out. A brown nose popped out of the bush and I immediately tapped Bill letting him know that a bear was coming in. I slowly grabbed my Strother’s Allure off the hanger as the bear started to move towards the bait barrel. I noticed that the bear was a little spooky but he was a shooter and I was going to make a shot if one was presented. After milling around for a few minutes he came straight to the barrel, a mere 12 yards away, only to walk away without presenting a shot.

He got to 20 yards and perched on a log presenting me a perfect broadside shot only quartering away slightly. I drew back quietly while Bill gave me the go ahead to shoot when I was ready. I steadied my sight’s right behind his shoulder and tapped my release watching my Pink Arrow Project V-Force with that bright Lumenok disappear exactly where my pin was set. We heard him run a short distance before crashing letting us know that Tru-Fire’s T1 broadhead did its job. I was so shocked and excited at the same time that I was shaking and couldn’t even speak for 15 minutes.

Author with her Pink Arrow Bear

We radioed the guides right away and after 45 minutes they arrived to help us recover my bear. We started to track the bear through the thick bush only to find him laying dead 20 yards past where I shot him. I was so pumped and excited. My first bear EVER! It was a great hunt and experience with the Paddock’s, Brad and the guys at Amyot Lake Outfitters. I can’t wait to go back next year for another bear.