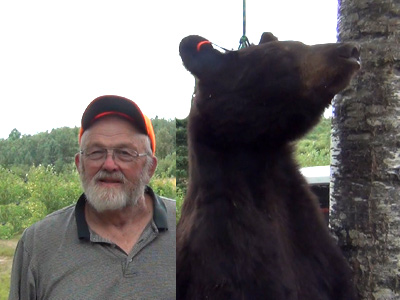 Bob and Rob McNeff hunt with Fred every year and have tagged a bunch of Ontario black bears over their 10  years up here. For them it’s an annual family affair.

When they arrived the McNeffs checked out the area Fred gave them to bearhunt and set out game cameras. Reviewing the pictures helped them decide where to set up and hunt. Bob McNeff was in a very thick area and borrowed an Double Bull blind from me and set it up. On opening day Bob and his grandson Grey were in the blind.

Just before 7:00 Bob saw black splotches moving along in the dense ground cover. The bear was going slow and stopping frequently. Soon Bob got a good look at the bear and decided to take his shot if he got the chance.

When the bear was 20 yards away Bob had a clear shot. He took aim and pulled the trigger on his Excalibur crossbow. The bear jumped into the woods and disappeared.

When he texted his son Rob he learned that Rob had also shot a bear.

First thing the next morning we loaded up and went to track and recover Bob and Rob’s bears. There wasn’t much tracking to locate Bob’s bear. It went down in 30 Yards.

We tied ropes to the bear’s legs and drug it to Rob’s pickup. Then we took it to the game pole. 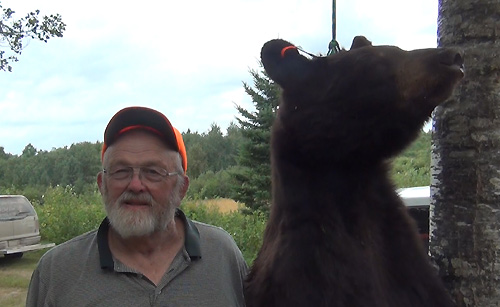 Bob McNeff’s bear is a color phase black bear, he is a beautiful brown color. Here the bear is with Bob and his grandson Grey. 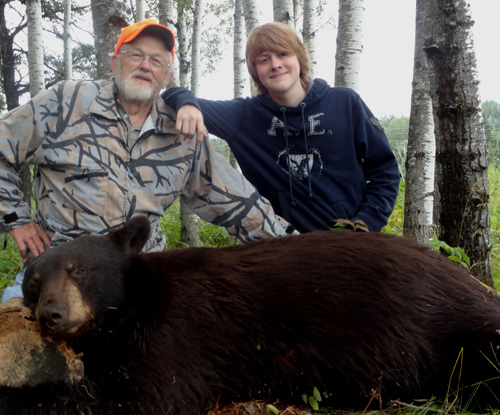 NEXT: Rob McNeff Makes It A Double …