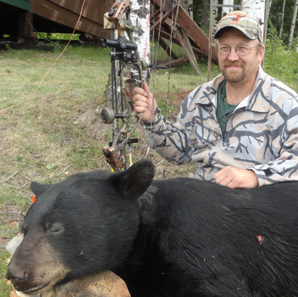 Rob McNeff dropped off his sister Joel at her treestand. Then he and his son Tucker went to Rob’s hunting area. Tucker climbed up to his treestand. Rob baited and banged the bucket and got in his own treestand.

Twenty minutes later Rob began a text to his sister. Tucker thought he heard a noise back in the brush that might be a bear. But the Canadian woods is full of noises and he didn’t say anything. But Tucker had heard a bear.

Then, back in the leaves and trees,  Tucker saw a black bear’s head poke up. Immediately he thought it was the big bear they had pictures of on their game camera. He turned on his video camera and whispered to his dad.

Twenty minutes later the bear carefully worked his way closer. Rob McNeff is particular about the bears he harvests and he wants big, mature boars. This mature, 350 pound big boy fit the bill.

Rob’s shot was good and the bear charged into the woods and they heard it go down nearby, followed by a death moan. Rob knew the bear was too heavy for the two of them to drag out of the woods by themselves. We went back and got it the next morning.

Finding the bear was easy. Then I took a picture of Rob and Turker with the bear. This is Rob’s 7th bear with Fred. 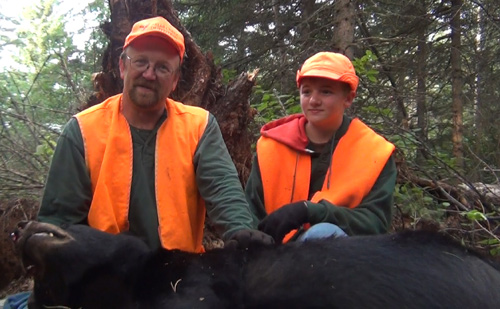 We rolled the bear onto an Ice Fishing Sled that one of the hunters brought to pull the bears with. 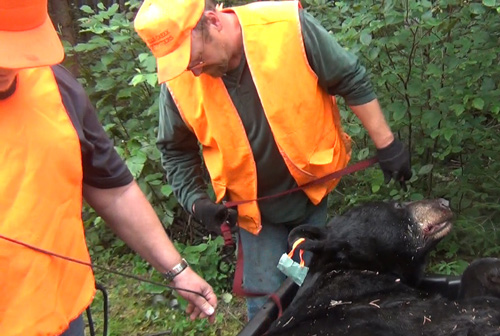 And we heaved to and pulled the heavy bear out of the woods. 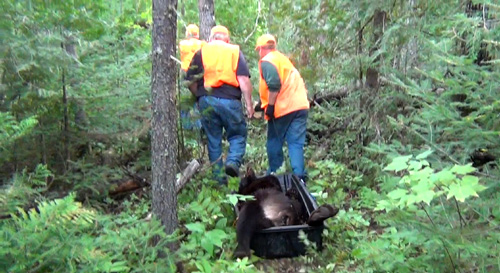 Fred Lutger weighs all the bears taken by his hunters and he got out two Hang ‘Em High rigs. This useful item is made by Rope Ratchet.  We use them to weigh the bears and occasionally to lift them up to the skinning table. 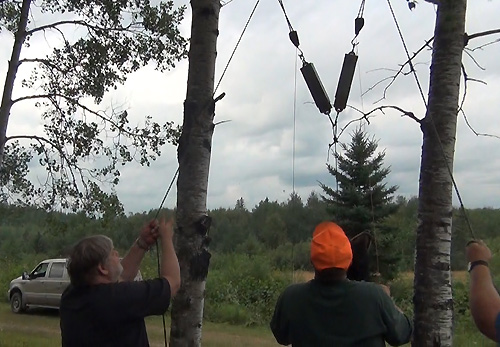 The Hang ‘Em High’s are a part of all our bear hunts up here. They make it much easier to lift the bears off the ground to see their weight on the attached scale. 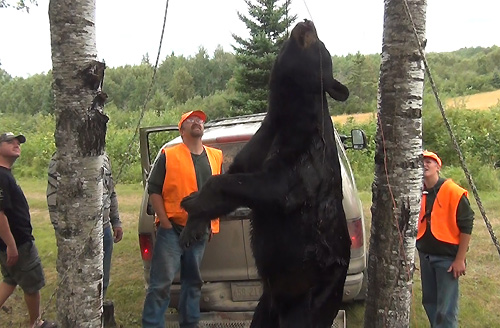 Another great feature about the Hang ‘Em High is that you can control how fast you lower the bear. That’s nice.

Once we had the bear on the ground, Rob changed into his hunting camo and I took his picture with his opening day, 2011 Ontario black bear.

Rob McNeff is the other owner of Wells Creek Outfitters in Clayton, Illinois. For info on their excellent Brown and Adams county guided trophy buck bowhunts:

Contact: Rob or Bob McNeff at 217-894-7195
Or Wells Creek Outfitters, RT1 Box 271, Clayton, IL 62324
Or by Email: wellscreekoutfitter@yahoo.com
On the web at www.WellsCreekOutfiters.com

Truth Behind The Wolf Recovery Project