by Robert Hoague
in Bowhunting Blog, Wild Hogs
0 0
A A
2 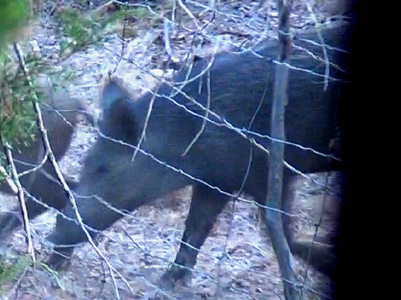 At the Point (where we are getting game camera pictures of the wild hogs) I have two stands. One is a treestand. The other I call “Double Bull In The Sky.”

A couple years back I made a 3/4 inch plywood platform in a cedar tree and set a Primos Double Bull Dark Horse on it. The floor is 6 foot off the ground. I decided to use this stand for my first wild hog bowhunt. It is close to the fence but has good visibility in the area where the hogs got their pictures taken.

Today’s high was 106 degrees but it dropped to a cool 103 at 7:20 AM when I went out to hunt. To get inside the Double Bull in the Sky I have to come up through an opening in the floor.

The first thing I always do is thump on the wall of the blind and if nothing makes any noise I take two steps up on the ladder and peek inside. I want to be sure there are no squirrels or other unwanted visitors inside. And, yes, I’ve had that happen before.

I laid my video camera, tripod, bow and a camo bag with a ThermaCELL and a few other hunting goodies on the floor and climbed aboard. Then I adjusted the blind’s windows so I could see and shoot.

While I was starting up the ThermaCELL a group of wild hogs surprised me and ran up. The lead hog shoved itself under the nearby fence. I turned on the video camera and pointed it where the hogs were. 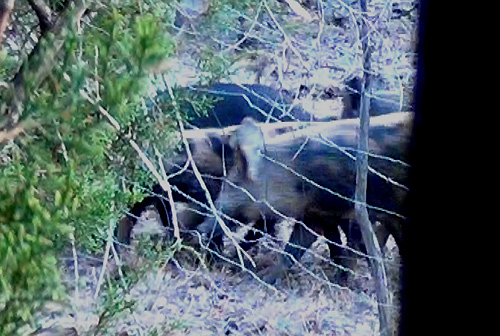 These hogs were close, less than 10 yards. Carefully, I reached down and picked up my bow. The hogs were filing under the fence.

Looking at it, the fence appeared to be ok. But the hogs had it bouncing around like it was made of rubber. More hogs came under. 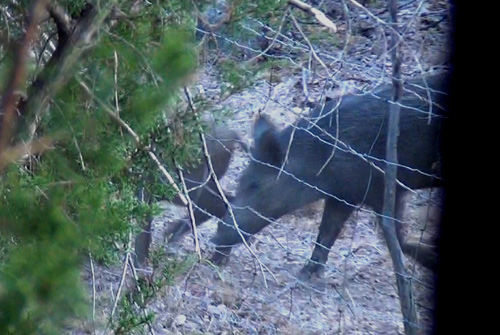 Most of the hogs were young, probably 60 pounders. Two were mature and twice their size. As the one below got to the fence I saw a black boar coming, it was the largest. 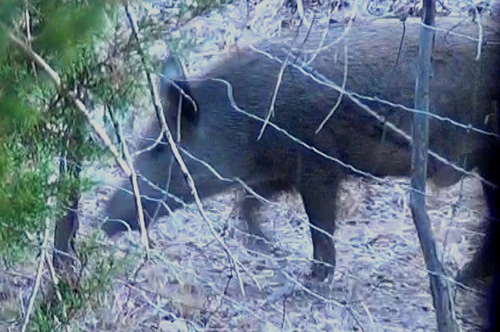 The boar crashed through the fence and stopped in the brush by some other hogs. You can see the boar’s ear in the opening in the tree limbs, he is 8 yards from me. I nocked an arrow and looked for a shot possibility. 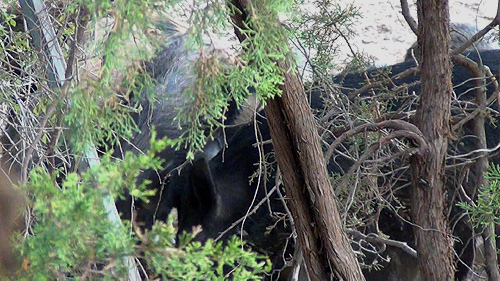 But it just didn’t happen and the hogs continued on their way.

Half an hour later I heard hogs grunting as they came by in the woods 80 yards away. But they didn’t have my place on their list of things to do.

And that was it for the first bowhunt. The good news is the hogs don’t know I was there in the middle of them and they’ll be back. So will I.

2011 Wild Hog Bowhunting is Sponsored By:

Total Recurve: Getting Set Up & In Tune with a Recurve Bow