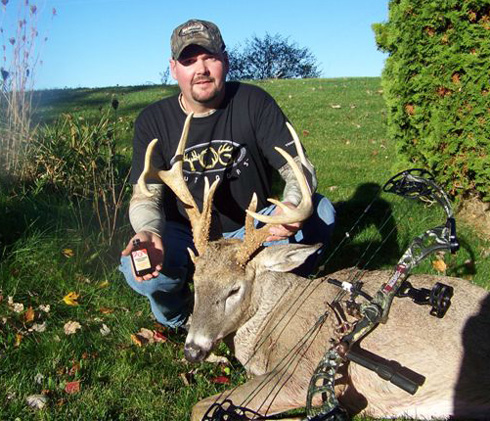 Author wiht the largest deer of his life. The Buck Stopped right there!

Fall in Michigan is such a great time to be doing the thing you love to do most BOWHUNT!

October had arrived and the hunting was pretty slow. I had been seeing some small bucks but no mature bucks. I was a bit disappointed especially after getting pictures of some really good bucks all summer and then now, seeing nothing. I was beginning to scratch my head.

A good friend of mine told me had had just gotten permission to hunt a 40 acre piece that I knew had great bucks on it. He told me he didn’t have time to hunt it till November so if I would do the scouting and hang some stands I could hunt it till then. I jumped at the chance and went to the property and started scouting around.

I found a great spot in between two patches of thick cover. After getting my stand set I went and made 10 mock scrapes along a heavily used trail. I couldn’t wait for some action.

October 10th arrived and I went into the property to hunt. You could only hunt this location with a north wind and the north wind was blowing. It was great being in my stand but the action was pretty slow with me seeing only a couple small bucks and a few does.

The 13th was my next chance to get in there and boy what a morning that was, I saw 3 great bucks that were grunting and chasing the does around, I had to scratch my head a little bit as it was early for this type of activity. They didn’t offer any good shots but I was already planning for the next time I had the right wind conditions. Things were definitely looking up.

October 16th arrived with a positive note. It was my anniversary and a very lucky day for me as I had also taken my 2 best bucks on this date. I was suppose to take my wife out for dinner that night but after a little bit of talking (pleading) I convinced her that we could go out to eat later as I needed to be in that stand since we had a north wind.

I arrived early at the property and after spraying down with Buck Stop’s Scent Eliminator I headed to the stand. On my way in I freshened up all the mock scrapes with Buck Stop’s Guide Grade Calming Doe Urine which turned out to be the best decision of the day! I had been sitting in my stand for about an hour when I caught movement in the thicket out in front of me. I couldn’t make out what it was but by its body movement I thought it might be a buck; and sure enough it was.

When he finally came into sight I think my heart stopped beating. This was not just a buck, it was a great 11 point buck with a real tall points. He was wandering around and had come to one of my mock scrapes. From that point it was game on.

He moved from scrape to scrape reworking each one, stopping at 22 yds with a slightly quartering away shot angle. I came to full draw and settled the 20 yard sight pin on the magic pocket and hit the release. I watched as the arrow found its mark and I knew he was mine. As he ran off I had to sit down and collect myself. I had just killed the biggest buck in my life to date and it was on that lucky day Oct 16th again.

I called my wife from the stand and told her dinner might be a little late; she said we could go another day and was just as excited as I was about my buck. After a tough tracking job through the thick brush and tall grass I had the 11 pointer in my hands and he was everything you could ask for in a 3 ½ yr old Michigan whitetail. P&Y 143 6/8

Having filmed my hunts for the past several years I was surprised when Buck Stop called asking if I would like to be on their Pro-Staff. After getting to meet the owners Brian and Bonnie Johansen, how could I say no? They are not only great people but they make the best lure and scent products on the market. Being on the Pro-Staff has also allowed me to test new products and new techniques. Watching the way bucks acted around the Buck Stop products has made me a firm believer in the use of Buck Stop scents.

Chef Klaus - Recipe For A Bear