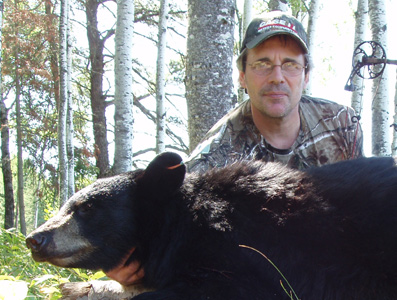 Kirby Knaskedt is a familiar face to folks who’ve followed our online bear hunts over the years. This year he came with 3 of his friends. The four of them went out together and set up treestands for everybody.

This is the first every bear hunt for Mike Gansmann of Saint Jacob, Illinois. On the first day’s hunt Mike’s stand was the furthest one out so he was the driver (of Kirby’s truck) and dropped off the other 3 hunters. When he got to his hunting area he pulled a little too far off the woods road and got a front tire stuck in some rocks.

Thanks to 4-wheel drive Mike maneuvered the truck until it came out. Then he walked into the woods  to his treestand. The first afternoon’s hunt was uneventful.

But on the next day’s hunt his luck changed. Movement in the woods at 6:50 pm caught his attention.  A wolf came to the edge of the small clearing where the bait was and walked around, back and forth, for twenty minutes. Then it ran off.

Then Mike saw a bear come out of the same place the wolf had. Mike slipped is bow off the bow holder and waited to see what happened. The bear came closer but stayed inside the woods edge of the small clearing where the bait logs were.

Soon the bear approached the logs from the left and rolled a log off the pile. Mike was now ready to shoot but the angle wasn’t good and he held up.

When it rolled the second log out of the way the bear turned broadside. Mike saw his opportunity and drew. He picked the spot, settled the pins in, and “cut ‘er loose.”

The bear spun around and bit at the entrance wound. And then turned and ran off to the left. Mike watched it run and saw it go down. When it made a death moan Mike figured he had his first bear.

He called his brother and told him what happened. His brother said he knew something was going on because Mike was breathing heavy.

Fifteen minutes later Mike climbed down and slowly approached the bear and poked it to make sure it was dead. Mike wanted pictures.

He was “so adrenalin charged” he drug the bear back to the logs. He had used his ThermaCELL during his hunt and set it by the bear to run the mosquitoes off. Then he set up a tripod and took his own pictures with his bear.

Mike went to the truck and waited until hunting hours were over and drove to where he let off Kirby. Surprise, Kirby was sitting on a white 5-gallon bucket and Mike noticed the glow of a Lumenok on the arrow he held in his hand.

And here is Mike telling us what happened on Bowhunting.net video.

Truth Behind The Wolf Recovery Project

Bowhunting for the Desert Grey Ghost