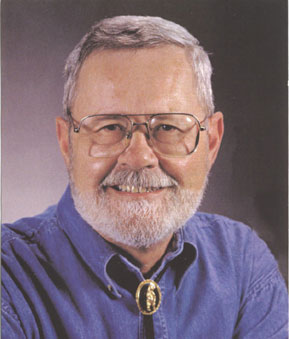 I got sad news this evening via email from my friend Dick Mauch that we have lost another member of our archery family. Dick Lattimer passed away around 3AM on the morning of Tuesday, September 6, 2011.  Dick was a great man and did so much for the sport of archery.   Most everyone knows how close Dick was to the late Fred Bear, whom he worked for over 20 years.  Although he handled advertising and PR for Bear, he and Fred seemed to me to have a close knit bond like a father-son relationship.

Dick helped usher in the boom in archery the sport had in the 1970’s by promoting the Bear campaign, “Become a two season hunter.”  When you saw Fred at a public event in the 1970’s until his passing, Dick was usually at his side camera and notepad in hand.

In addition to a career at Bear, Dick was also heavily involved in AMO were he served as President. He also authored at least four books,  one on space, one on Jesus, and the two books, “I remember Papa Bear” which he graciously allowed us to publish on Bowhunting.Net in its entirety, chapter by chapter and “Hunt with Fred Bear.”

He was also involved with the Archery Hall of Fame and other archery related organizations. Although I never met her, his emails to me often mentioned his wife Alice, who survives Dick.  We had a running joke because I often did summer shows in Florida, and Dick & his wife would be in Indiana for the summer and then in the winter when I did the Indiana show Dick and Alice would be back in Florida.  I would often tease Dick for avoiding me and my show.  It became a running joke.  Dick had a great sense of humor.

In the coming days I am sure there will much written about this fine man.  He is an archery Hall of Fame member and did so much for our sport.  I am reminded of the story about the great western actor Ben Johnson.   Johnson won an Oscar for his role in “The Last Picture Show” before John Wayne won his Oscar for True Grit.  Yet even while Johnson had an Oscar, and at the time Duke did not, Johnson often had roles that had him playing John Wayne’s sidekick.  One reporter once asked if that didn’t bother Johnson being such an accomplished actor and yet playing second fiddle to Wayne, Johnson is supposed to have replied, “Somebody has to hold the horses….”   That was Dick Lattimer.  He never seemed to mind helping shine the spotlight on Fred Bear, Bear Archery and the sport of archery.  He was always behind the scenes, running a camera, video camera, or banging out words on a typewriter.   In my book Dick was as good as they come.

I thanked him a just a few years ago for not running me off as a kid when I would bug Fred at shows.  He could have and yet never did.  As a matter of fact, I still have an envelope of photos Dick sent me of Fred and I at an event.  He mailed them to me a few weeks after the show.   During the event, my parent’s and I had attended a big fancy private party Fred hosted in Atlanta during the SHOT SHOW.  We stayed till the end and walked down the hall as Fred and Dick left the party.  I snapped a photo of the two of them walking down the hall together, the hero and his trusty sidekick.  Now days I view them both as heroes.  I see that it was Dick who often was behind the scenes helping steer the media and image of Fred and Bear Archery.

His eulogy “It was quiet in the forest” that he wrote and read at Fred’s service was one of the most beautiful eulogies I’d ever seen. Although I didn’t attend the service,  he sent me a big packet of stuff shortly after Fred’s service which had a copy of that eulogy in it.  He was thoughtful like that because he knew just how much I loved and admired Fred.  Dick was often selfless and always thinking of others. Anyway, perhaps that’s a fitting end for our friend Dick, because once again the crow has come to tell us of the death of that giant Bear’s great and trusted friend.  The Forest is again quiet..  So long Dick, we’ll miss you.  Thanks again…our sad loss is now Heaven’s gain.