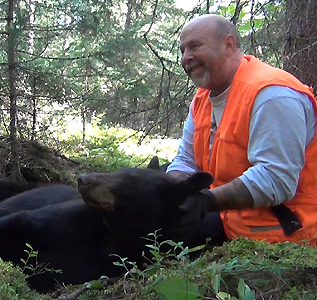 We started our bear hunt out by meeting Mike Ditchler at his restaurant Chef Klaus’s Country Cookin’  in  Mokina, Illinois. I ordered corn beef hash and hash browns with english muffins with orange marmalade. It was perfect.

We went on the road and arrived at bear camp 12 hours later. The net morning we hit the cabin floor running and a few days later we had everything ready for the hunt to begin on the 15th.

We had game cameras out and the Chef (Mike Ditchler) liked the bears he saw at a new stand site.  Mike checked and baited the site every day. It was hit every time.

Alpine Archery had sent their new Alpine Super Duster Wind Detection System and Mike used it every day. The bright green powder told Mike the wind direction. When he had the predominant wind direction figured out he his treestand and tree ladder in and set up in a tree that had the wind to his advantage.

On opening day his new area was alive with mosquitoes and flying insects so Mike turned on his ThermaCELL as soon as he sat down in his treestand. That took care of the insect problem and soon Mike saw a bear sneak down the hill behind the bait logs and come to the bait. It shoved the logs apart. Chef got his new digital camera out and took a picture. 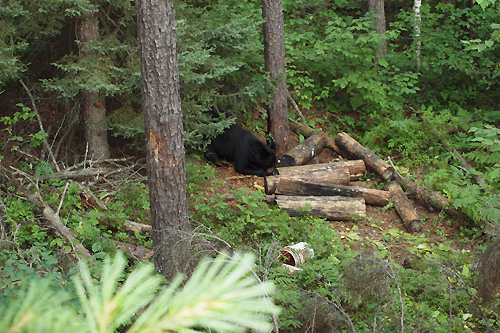 As Mike watched a second bear came up and helped himself to some of the exposed goodies. 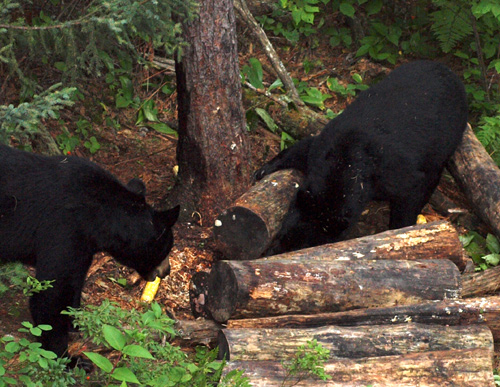 The bears were not happy sharing the bait. The largest bear stood up and snarled, clicked its teeth and snapped at the other bear. But it was not intimidated and faced off, snarling and snapping. Then they chased each other around in the woods, coming and going, for over an hour. The largest bear was a real bruiser but Mike decided to pass and see what else was around. He hunted some other sites.

Five days later he decided to return to his first stand. He passed on this bear too. 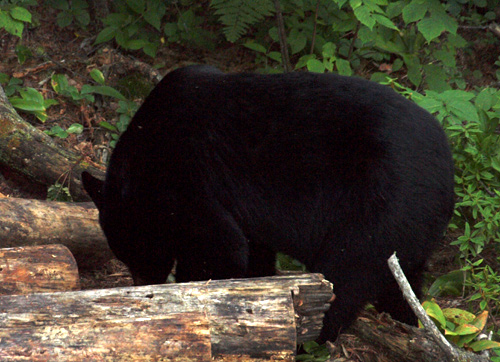 The next day Mike was back. A bear with a brownish cast walked in on the trail Mike used to get to his treestand. It went to the bait logs and grabbed a piece of meat and ran up the hill. 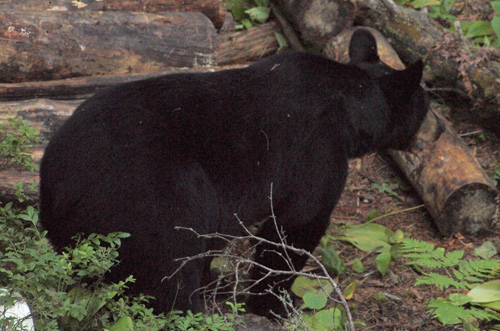 The bear went back and forth, from the bait to the hill, over and over. However, the bear was always in the wrong position for a good broadside shot.

Finally the bear came up on the far side of the bait and reached between some logs and stuck its head down in the opening. At last, it was broadside.

Mike aimed and took his shot. The bear ran up the hill.

Mike heard the bear moving around but did not hear a death moan. Later he got down to check things out. There was blood on his arrow. And he followed sparing splashes of blood up the hill. Daylight was fading and the Chef decided to wait for daylight.

We returned in the morning and quickly recovered the bear, a nice brown, color phase Ontario black bear. 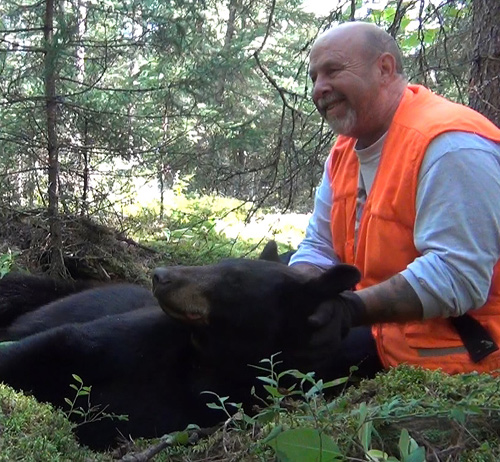 For once the drag to the truck was down hill. We loaded up the bear and returned to camp.

Here is the Chef on Video telling us, as only he can, what happened on his hunt.