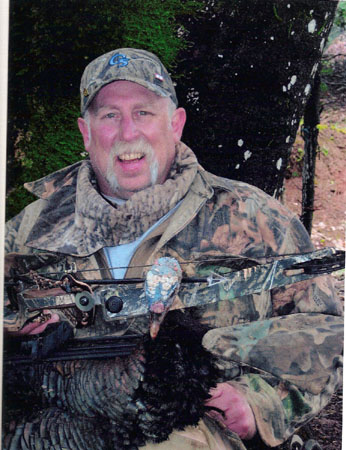 As a serious, dedicated and avid Bowhunter, I enjoy introducing new hunters to the sport I love and witnessing their first success. I have had the opportunity to accompany several hunters on their first hunt and have hopefully taught them from lessons I’ve learned along the way. The early years when I was “on my own” and struggling to learn from magazines and using my instincts to guide me, are still vivid memories! I was lucky and persistent and it paid off the first year with a wild pig and my first buck! That was a beginning I cherish, but has pushed me to help others.

The archery world has been good to me and has brought me in contact with archers from all walks of life. Most recently I had the pleasure of meeting a very special person……….. Don Wixon.

Destiny leads us down some interesting paths. I believe in fate. I believe fate brings people into our lives for a reason and through fate I met Suzanne. Through Suzanne I learned she had a brother who was wheel- chair bound due to a spinal injury he received in a motorcycle accident. Don had gotten interested in bowhunting 2 years prior to his accident. Although he had returned to rifle hunting with several of his friends, the bow became part of the past. That is, until he met me!

Don and I spoke on the phone often, sharing hunting stories, and became friends. Within a few days of our initial phone call, he was practicing with his 20 year-old bow! I could hear the excitement in his voice when he called to tell me the news. He was anxious to see my “Memory Room” and discuss bowhunting possibilities so I invited him for a visit.

My first meeting with Don was a memorable occasion. Don is a paraplegic. He isn’t special because of his handicap, but his good nature, positive attitude, his appreciation for the things he can still do and his courage are what make him special. There is no room for self-pity. As he recently said, there is always someone else that has it worse. He is willing to give 110% in his efforts to be independent and to do the things he enjoys. Don is an avid fisherman, competing in fishing tournaments, hunts and is quite artistic. He can transform a plain white skull into a true masterpiece through a unique wood laminating technique. The technique he has created is time consuming, requiring an eye for detail and total devotion to the project. The completed skulls are beautiful, a focal point in any trophy room. Thanks, to Don I proudly display one of his masterpieces in my “memory room.”

Don was in awe of the mounts, skulls and the many mementos I collect wherever I go. We chatted comfortably and even planned a Turkey hunt at one of my favorite haunts. We busied ourselves setting Don up with a new bow complete with a TruGlo sight and quiver, a Whisker Biscuit rest, G5 Montec and Tekan broadheads. We finalized our plans for a two-day Turkey hunt at my friend’s ranch in Vacaville. With the aid of a quad, I could get him to a good area and set him up in a ground blind and hopefully he would get a chance to arrow his first Turkey. Don’s face literally glowed with excitement. It felt good to play even a small role in Don’s new venture.

With a bin full of decoys, a camo bag filled with calls and plans buzzing through my head, I pointed my little red truck toward Vacaville.

The loaned quad was waiting as promised but where was the key? Unable to locate the key in the obvious places, I loaded the blind on my back, picked up Don’s bow and the decoys. Don wanted to try to wheel himself along the rough road to an alternate hunting site. Not being accustomed to the stumbling blocks someone confined to a wheelchair deals with, I assumed it would be as easy as walking on two feet. Well, the wheelchair was not equipped with four-wheel drive or all terrain tires! But, with the blind up, decoys out, Don wheeled inside just as the distant gobbles broke the morning’s silence. To my dismay, within a short time all was silent again. No movement on the hills, no yelps or gobbles. What could be wrong? As I glassed the hills, the answer became apparent. A mountain lion was chasing a turkey! I decided to relocate Don in hopes of increasing his odds of at least seeing a turkey. Don’s first words when I went to pick him up was, “I heard a lion on the other side of the pond, but saw no turkeys.” It didn’t take long to find the tree the lion had been crouched under which explained why the turkeys didn’t follow their normal routine.

With temperatures rising, especially in the blind, Don wanted to sit under a tree by the pond in hopes of the turkeys coming down for water. Once again he was settled in and I headed for camp. When Don called on the cell, I hoped he was reporting a kill but he calmly stated I needed to come right away; a rattlesnake was coiled by his legs! By the time I got to him the snake had crawled into the taller grass, which meant I needed to locate it before Don dared get on the quad. Poking around with a stick produced immediate response from the angry intruder, but the thick lush grass kept him safe from arrows. We both missed him, but did send him slithering into a hole at the base of the tree Don was sitting under. Of course Don was good-natured about the experience assuring me he would give up ground-sitting for the safety of an enclosed blind even if it was stifling.

Relocating the blind we tucked it under a huge Oak tree on a knoll overlooking the pond. I couldn’t help but wonder what would happen next. After all, what could top lions and rattlesnakes? The answer came within the hour when the notorious Vacaville winds proceeded to whip through with a vengeance. Poor Don! Once again, Don is on the phone. “If it wasn’t for my fat butt the blind would be in the pond.” The blind, staked & tied was lopsided, windows flapping and the decoys missing. The wind must have been blowing at least 40 mph, so use your imagination and envision wrestling the blind to the ground, flattening it and then trying to get it coiled into the circle that fits in a circular tote bag! That is a challenge under the best conditions, but add a downhill slope, vicious winds and gales of laughter to this scenario and it was anything but routine! At one point I was knocked to the ground, slid across the finally flattened blind and thought I would be blown into the pond! My friends, Ray and Kay were enjoying the show too much and Don was almost doubled over himself. Between Kay and me we finally had the source of humor back in the pack and were headed for camp. I went for the fresh pot of coffee I had left brewing to rescue Don. But, there was no coffee. In fact, there was no stove either. The winds had relocated everything; the stove, lanterns, coffee pot and decoys. What a day.

Our two-day hunt was over all too soon. We had a lot of laughs and I learned how much I don’t know about wheels for legs. Don is a lot of fun and enjoyed the hunt even though he didn’t have a shot opportunity this time. I was confident he would have his day!

As I settled into my sleeping bag, I looked up at the stars and felt grateful for my life. Grateful for my friends and family and the opportunity to share this wonderful sport with so many, especially someone like Don.

Determined to get a turkey, Don and I planned a hunt at his sister’s ranch in Willits. Rain was in the forecast for Saturday night through early Sunday A.M. but we were willing to work around it. By 5:45 A.M. we could hear gobbling and hurriedly arranged decoys and started yelping. They were closing the gap and suddenly I had six tom’s 18-yards from me but they continued on their mission without giving Don a shot! Par for the course, we would be challenged so naturally, within a short time, we were being pounded by a fierce storm.

Amazingly the turkeys moved all day, while evading Don’s shooting lanes. With the patience of a true bowhunter, Don sat until 4:00 without a break! Of course the turkeys were all over his blind come 4:15!

The rain continued through the night but slowed to a drizzle as we returned to our hunting area the following morning. The morning was quiet and uneventful. I doubted success for this trip as the time slipped by. Glancing over at Don, I was surprised to see him at full draw! Somehow the flock had come in without me detecting them and Don was ready! I watched as the arrow passed through and lodged in a tree. The look on Don’s face when I dropped the bird in his lap was priceless. After four days of hard hunting, challenged by a lion, a rattlesnake, wind and rain, Don finally had his first well-earned Turkey!

Don is a pleasure to hunt with and to sit and talk with, a true inspiration. As I think about his many challenges in everyday life. I treasure the friendship that has developed and I’m proud to be a part of his hunting experiences!

As bowhunters, we think our chosen weapon is challenging but if we stop and imagine being confined to a chair, unable to track an arrowed animal, or move around a blind with ease, maneuver the hills or climb a tree, just to name a few things we take for granted; we see what a real challenge is and will be much quicker to count our blessings! I watch in utter amazement as I witness Don, in his wheelchair, fold his blind so easily!

Meeting Don has definitely painted a new picture for me, drives me to research hunting possibilities for “challenged” hunters and to help in some way and I am happy to have found PCBA as a route to reach out and help!