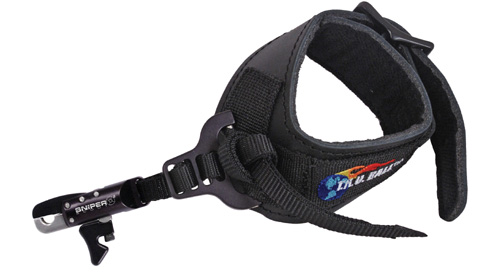 A quick look through my shop and you will see that Silks Outdoors trusts the T.R.U. Ball Company and products. I have one rigged up to my Hooter Shooter portable shooting machine, two of my sons use T.R.U. Ball releases, I typically have two releases I rely one, one of which is a T.R.U. Ball, and anyone who forgets their release during my annual Head2Head Bow Test™ is given a T.R.U. Ball release. The equipment is terrific and the people that work at Tomorrow’s Resources Unlimited, Inc. are even better. Ben and Randy Summers, part of the T.R.U. Ball Team, are top notch folks and I always look forward to seeing them at the ATA show.

There are two releases I want to highlight here: The Sniper2 Scout and Absolute, including the 360 version. These two releases are representative of the quality and functionality that T.R.U. Ball has to offer.

With the Sniper2 Scout you get the mechanics of the original Sniper2 with the new cleated connection between the head and wrist strap. The cleated connection allows for an easy adjustment of the length (reach), which will span a wide range of shooters.

When adjusting the scout to match up to my short reach I found it easier to unlace the strap through the cleat part way. Not the entire strap but just enough to make sliding it through the cleat easier. Another tip – measure the strap between the head and cleat, pull back your bow, extend your index finger (without actually touching the trigger!) and note the approximate adjustment needed to make the trigger match up to the place on your finger you want to come into contact. Now, adjust the strap using your ruler to get it close to where you approximated and lock it in place – lace it up. If you are not right on the money you should be able to get there with only one more adjustment. Hopefully this will cut down on the number of times you will need to unlace and lace the strap through the cleat. It took me two adjustments and the release fit me perfectly.

Let’s go over some of the basics of the Sniper2 Scout:

• The trigger is a roller sear – a sear holds the trigger back until a given amount of pressure is applied. A roller sear actually contains a small roller that allows the trigger to pull smoothly.
• Forward trigger position allows the archer to maintain draw length and speed
• Trigger sensitivity is adjustable
• Teflon coated jaws
• Features “Pull Trigger to Open Jaws. Let Up To Close”
• Has Jaw and a Half design
• Web connector allows the head to be easily tucked out of the way
• Made in the USA

One of my favorite features on this release is the smooth action trigger. There are no rough spots and the pull is consistent from beginning to end. I have owned some good releases and some not so good releases through the years and when you shoot a release with a smooth trigger it makes all the difference in the world when it comes to your form and the resulting accuracy. The half jaw floats slightly to allow a measure of forgiveness to the single jaw mechanism.

Another plus on the Sniper2 Scout is the loading method – pull trigger to open jaws and let up to close them. There is no clicking or snapping. It is quiet and controlled. The Sniper2 Scout is available with a black Velcro® strap, Black leather strap, or all new Speed Buckle Connection. The Speed Buckle connects in seconds by simply inserting the tab of one connector fixture into the receiving tab of the other connector. To release you only have to pinch the top of the two connectors.

The test release was very lightweight and the black leather buckle wrist strap was easy to attach and provided excellent comfort. To date I have shot hundreds and hundreds of times with this release and there has not been one glitch or problem with it. When I go to the shop just to take a few quick shots with a new arrival this is the release I grab. The workmanship and finish are excellent, which is what can be expected from T.R.U. Ball.

The Absolute release is the type of top-end gear that will actually improve your scores. This is a cream-of-the-crop target archer’s release featuring patent pending Head-Centric Technology (HCT). HCT allows a free-floating up and down swivel action of the head. HTC is advertised to keep the head centered throughout the back tension sequence, eliminate nockpoint location/peep rise and fall, maintain a consistent draw length and abolish torque. T.R.U. Ball now has the 360 version of the Absolute, which permits the head to rotate a full 360 degrees. Together the HCT and 360 movements perfectly align the release so that torque is eliminated. The 360 rotational action can be locked down with an Allen Wrench once the perfect position is found. Let’s take a look at the main features/options on the latest and greatest – Absolute 360:

There is a video on You Tube that does an excellent job of demonstrating the benefits of the Absolute’s Head-Centric Technology.

The key is where this release pivots – ~5/16” ahead of your finger’s contact point with the handle and between your index and middle fingers. As demonstrated on this video you will see that a release with a pivot point closer toward the head will actually move the nocking point up or down and slightly change the draw length when the middle or index finger is relaxed. The Absolute, however, has a range of pivot that will produce no change in the nocking point or draw length. Of course there is always a limit. If you torque the release to the extreme in either direction you will end up with the same issues.

What you will notice at the range is a super smooth release, a more “settled” anchor point and incredible consistency. This release actually makes me shoot better – I can stack arrows with this release where I do not with others. It is a simple fact but a very important one. The Absolute and Absolute 360 will bring you directly in line and centered behind your nocking point. It removes error and introduces precision. For me it also instilled more confidence. Just knowing I was directly in line was a boost and my accuracy increased as a result. I am not a big target archer but I was still able to reap the rewards of T.R.U. Ball’s innovation.

Making this release shoot just the way you want is totally possible. You can easily adjust the trigger travel and trigger tension as well as the thumb button position. I experimented with all three until this release was “mine”. Having that trigger button in just the right place will make you a better shot – no reaching, no strange torque, etc. Take the time to position is perfectly. The model I chose to test was the Titanium finish, 4-finger model, with no pinky trigger.

For more go to: T.R.U. Ball Archery or shop Amazon below!