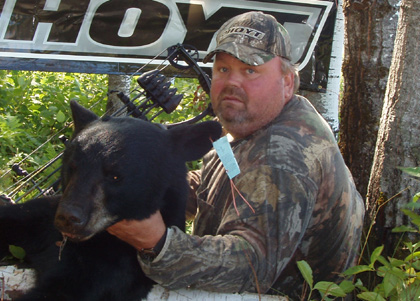 This years is Kirby Knackstedt’s 10th year to bowhunt with Fred. He always comes with a group of friends from his home town area in Alhambra, Illinois. Sunday Kirby arrived with 3 of his buddies from Illinois. They went to their hunting areas. All the baits were hit. The group worked together to set treestands for everybody.

On the hunt that afternoon his buddy Randy was the only one to see a bear, he saw a small bear. The next afternoon it was raining as the group went out to hunt. It stopped before they went to their stands.

At 5:30 Kirby noticed a bear. He was hunting on a wedge where he can see two logging roads intersect. The bear was very cautious and walked back and forth in the road. It took the bear over an hour to finally enter the woods and start in Kirby’s direction.

Kirby had his video camera mounted on a tree arm and he turned the video on record. The bear didn’t waste any time approaching the bait logs. It took about 4 minutes for the bear get positioned for a broadside shot. Kirby drew and put his arrow in the vitals.

The bear ran 40 yards and went down. Seconds later Kirby heard the familiar sound of a bear’s death moan. It was 6:45 on the second day of the hunt.

At 7:20 Kirby lowered his gear and climbed down from the tree. He went to the bear and then carried his gear out to the road and waited for Mike to pick him up.

The next morning they went to recover his and Mike’s bear. Either wolves of another bear had ripped it open and ate the guts and hind quarters. Kirby wanted the bear meat but it wasn’t going to happen with this bear. However, the hide was ok and would do fine for the head mount Kirby wanted.

Kirby Knackstedt began bowhunting whitetails in his home town area of Alhambra, Illinois 25 years ago. He is an avid hunter and has appeared on several of TV’s hunting shows. Kirby shoots competively and is tough to beat.  Back at home he is a carpenter, operates a farm and owns B & K Hunting Supplies.

Since his first trip back  in 1993 Kirby has regularly returned with groups as large as 15 and the Illinois guys have harvested over 100 black bears.

So far Kirby’s 2011 group had harvested 2 bears. But they were gonna get 2 more.

And here is Kirby Knackstedt on video, the day after he arrowed his 2011 black bear.