by Robert Hoague
in Bear, Bowhunting Blog
1 0
A A
0 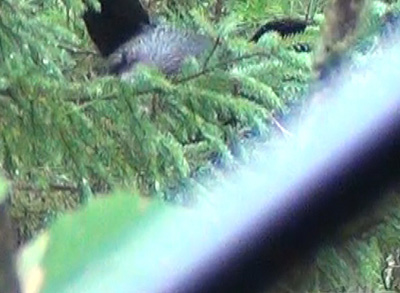 After daily reviews from my 4 different SpyPoint game cameras I decided to hunt at a spot called the Hose. I set up a Primos Double Bull pop up blind there a few days before the first hunt there. On opening day Fred Lutger and I went to the Hose.

Every year we video for each other and this year Fred had video duty and I was the hunter. Our hunt is a 6 day hunt so I have 3 days to make it happen before the turn passes to Fred.

At 6:00 we caught a glimpse of black in the thick woods. The bear was cautious and moved around the area slowly, but the woods was so thick we couldn’t get a look at all of him. I focused my new Leopold binoculars on the  bear and followed him around. Eventually I put him together and realized he was a very large boar. He crossed in front of us left to right and then back to the left. At one point he came up on a trail near the blind. 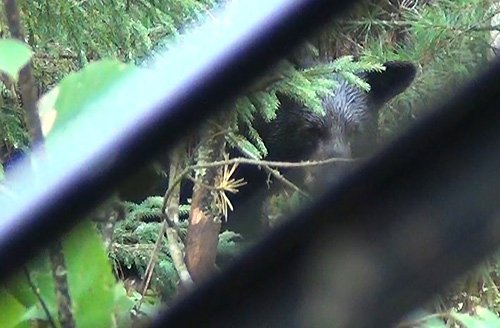 Although he was extremely cautious he did not seem concerned about the Double Bull. He plenty of  time checking everything out.

And then he melted back into the thick woods. After the bear was gone Fred and I waited in total silence. Chances were good that he would return.

Chef Klaus picked us up on the overgrown woods road. We picked up Robbie Cramer and he had a bear. As did the 4th hunter with us — however, this particular hunter did not want to be a part of the hunt’s internet coverage and even refused to have a picture taken with his bear, which he said was too small for his standards. (But he was the one who shot the bear, which weighed 185 pounds and was a mature bear. Not a “big” bear but not small either.) Anyway, Mr. Anonymous went home as soon as possible.

When we got to camp we learned that 2 more bears were taken. Both Rob McNeff and his dad Bob had made good shots of large bears. We recovered their bears in the morning.