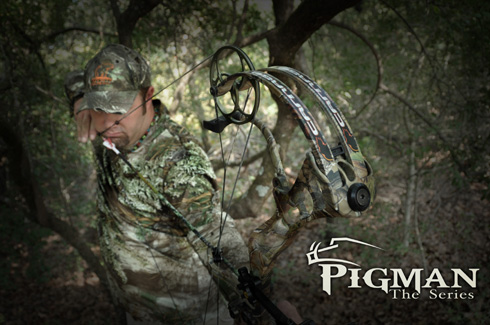 Bear Archery, Inc. is pleased to announce the signing of Brian ‘Pig Man’ Quaca, current Host/Executive Producer of Leupold’s Pig Man: The Series. With his unique approach to filming outdoor television, Pig Man has burst onto the outdoor scene having taken home 2 Telly Awards in 2 Seasons with the help of his production team and in addition, was named 2010 Sportsman Channel Host of the Year in his first season on air.

In 2007, Pig Man began shooting Bear Archery equipment as a ProStaff shooter prior to making a decision to jump into the TV ring. After a couple years of contract TV appearances, it was time for him to develop his own niche and become the host of his own hit TV series. “I’ve been involved with the folks at Bear for several years allowing me to establish a very good relationship with them. They’re just good people with a good perspective on what consumers want to shoot” said Quaca. “This partnership was all about timing and I’m happy to say that I’m a part of the Bear family.” Pig Man will feature the Bear Carnage and the new 2012 bow beginning Q1 2012 as he enters his third season on the Sportsman Channel.

“We are excited about building upon our relationship with Pig Man for 2012 and beyond”, said Bear Archery/Trophy Ridge Marketing Manager Jason Pickerill, “His passion and enthusiasm for bowhunting is shared by each and every person at this company, which is exactly why Pig Man is such a great fit within our organization.”

Look for Pig Man and his Bear/Trophy Ridge accessories beginning late December 2011 on Leupold’s Pig Man: The Series only on the Sportsman Channel, the leader in outdoor TV for the American Sportsman.