by Trevon Stoltzfus
in Bowhunting Posts
0 0
A A
0 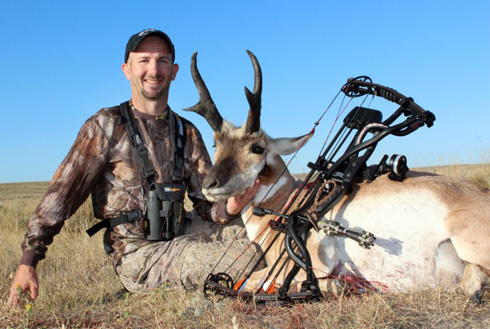 Author and two companions 'walked' up on this trophy buck. Couldn't have done it with the HECS.

For this month’s HECS column, I thought it would be fitting to take a page out from my journal as my 2011 hunting season begins. This is a mid August bowhunt for Antelope in Wyoming and really shows the versatility of using the HECS System to get close and seal the deal!

Bowhunting Antelope can be quite a challenge. With eyes like a set of 8 power Nikon binoculars, blazing speed, and skittish demeanor, harvesting an antelope with a bow can be a roller coaster ride. In 2011 Adam Wells and I kicked off the fall hunting season with a speed goat hunt with Scott and Angie Denny with Table Mountain Outfitters in Douglas, WY. This was truly exciting to me as this would be my first chance to bowhunt since my shoulder surgery.

The first morning of the hunt Adam and I both went (with our camera crew, Sarah Murphey with me and Kyle Sanderson with Adam) to our blinds set up on water holes with excited anticipation. In our blind Sarah and I had some excitement at around 8am as a doe and a fawn followed by a small buck came into drink. After sizing him up I made the decision to pass on him and instead just shot him with my camera. Throughout the day a few more does came to drink as the squelching Wyoming heat set in. A group of 4 bucks circled but never committed to the water hole or offered a shot, and that was the last of the excitement for us in our blind for day 1.

Adam and Kyle, on the other hand, had a little more action. Mid morning some domestic sheep paid them a visit and soon a few doe antelope were drinking from the water hole. That started the party and soon they had a group of four smaller bucks getting hydrated in the heat. Adam wisely passed on the smaller bucks, and not 10 seconds after those bucks finished drinking and headed back out on the prairie, Adam spotted a good buck coming at a steady pace right to the water hole.

Adam got ready and when the buck dropped his head to drink he gave Adam a great 20 yard broadside shot. Adam’s arrow flew true and the buck went down 30 yards away on video. The footage was great and Adam couldn’t believe how relaxed the antelope were as they came into the water. This, in his opinion, could only be attributed to his and his cameraman’s use of the HECS. Adam was tickled, as this was his first Pronghorn buck with a bow since he was in high school.

The next morning Scott Denny, Sarah, and I jumped in the truck ready for another scorching hot day in the blind (AKA. the sweat box) and hoping that some big bucks would be thirsty.

On the way to the blind we drove by a lone antelope that was feeding by the two track road we were on and was paying us no mind. As we rolled by him I mentioned to Scott what a great buck he was and how I would love to have a shot at him. Scott smiled and said, “These antelope are so use to seeing the gas and oil field trucks they sometimes ignore them, watch this!” He circled around out of sight and we got out of the truck. Slowly we worked our way angling toward the buck’s slow line of travel cutting down the distance. Soon we were out of cover but since we all were wearing our HECS (Human Energy Concealment) suits we decided to try and push our luck.

As we continued we were in plain sight. The buck just looked at us, apparently, feeling no threat, he went back to slowly feeding. We cut the distance down further until we were in bow range and I was able to slowly draw, settle my pin and drop him with an arrow. It was amazing! I had never seen anything like it. We basically angled toward the buck (all 3 of us) until we were in bow range. If you haven’t seen how the HECS Technology works you owe it to yourself to check it out. (www.hecsllc.com)

The trip was a huge success and a great way to kickoff Outback Outdoors fall hunting season! For me it was extra special as this was the first big game animal with my Hoyt Carbon Element after my shoulder injury and surgery.
Thanks

Trev
Outback Outdoors
For this hunt and more go to:  www.outbackoutdoors.net