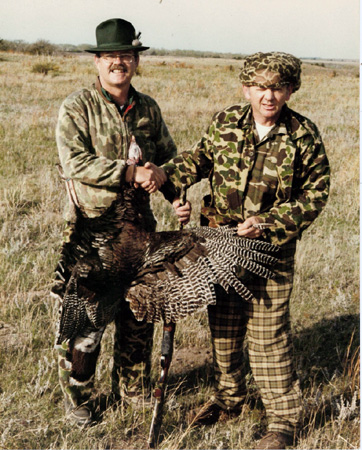 Dick Lattimer with author after a successful Spring turkey hunt.

Carol and I went to Plum Creek to check the cabin gas bottles, the refrigerator freezer, the little garden, and to pick the tomatoes. While Carol did some mowing and moved some cattle mineral tubs with the ATV, I was alone (but with my two vizslas, Kat and Two) to tidy up inside the cabin. I kept thinking of Dick Lattimer and recalling the fun times of the past years. I kept remembering his hearty laughter, who could ever forget that special boisterous laugh, which was so very much Dick. I was naturally drawn over to the curtain on which Dick had recorded his visits to Plum Creek. He had been the first to sign in on the new curtains when he came with Fred and Glenn St. Charles for a spring turkey hunt in May, 1982. It was not his first visit or hunt with me and the old Bear Gang. That one was the fall of 1976 and was just the beginning of creating our special bond of friendship.

I don’t have an exact record or memory of the other visits before I built the cabin, but He, Fred, and Kelly were in Bassett to help us celebrate the completion of the first 1 millionth bowstring we made for Bear Archery in Bassett, and another fall hunt with them when he laid out the issue of the “Big Sky”, Fred Bear Sports club publication to help us in our fight to save the Niobrara River from a Pork Barrel Federal dam., the effort which ultimately, we won and which is now a part of the U.S. Park system scenic River. Our Niobrara scenic river is now almost being “loved too much” by the thousands of visitors who canoe, ride tubes, and just come to see the natural beauty of the special places like Smith Falls. I believe it was in the fall of 1980 that Dick volunteered his talent, took many pictures of our bowstrings on natural backgrounds, of the factory floor at work, and produced the art and layout, printer ready, for my Cornhusker Archery Bowstring brochure. Yes, he did this on his own for me, his friend.

Dick always had his camera ready and he shared some of this best shots, many with Fred and others of the gang with often included, Gordon Ford, Dr. David Strider, K.K. Knickerbocker, Fred, Bob Kelly, Judd Grindell, Ben Rogers Lee, and sometimes a local bowhunter or two. In that era 1970’s to about 1990, Archery Turkey hunting was finally being accepted. Earlier, many turkey enthusiasts thought the bow and arrow inadequate for turkeys. With stories of our hunts with Ben Lee, and Fred. Bear Archery’s special 1979 catalog to turkey hunting, Dick’s layout work in using a fine artist, Rod Lawrence, in lieu of actual photos on all pages led the way for acceptance of bowhunting the wild turkey. The inside cover and first pages “Fred Bear Challenges you to try bowhunting the Wild Turkey” On page 8 of the catalog, Dick used a topographic map of our Plum Creek property for background of the compound bows. Dick, Fred, and Kelly sent us a framed print of one of Rod Lawrence’s turkey paintings, same format as the catalog. This afternoon that picture caught my eye as it adorns a place on one of the cabin walls. More memories came flooding back to times and event and Dick’s, and Fred’s first turkeys. Those are special stories I might someday tell.

There was still more than Turkey Bowhunting in that 1979 catalog for the inside back cover featured several other related activities which Dick Lattimer headed up and devoted much time and energy to. “Care about America’s wildlife, WE DO, a plug for the International Association of Fish and Wildlife Agencies. There also, a picture of the Board of directors of the American Archery council, and the AAC archery ranges being initiated around the country.

Fred Bear, Bob Kelly, and Dick Lattimer, now all are legends that will ever be remembered in the National Archery Hall of Fame.

When Dick decorated his spot on my curtain, he drew the Bear Archery logo, black and green. Each succeeding trip he just filled in the dates or month and year. Oct. 1982 (with Fred and Glenn), ; 1st of May, 1984 (spring turkey hunt with Fred); 2nd May, 1985; Fall Hunt 1989 with Kelly’s White Hat Gang, Glenn and Margaret, but Kelly ailing and absent.; October 1990 ; October 1991 on the curtain, but on the south wall over the window, are two arrows which harvested two whitetail does. One is Ann Hoyt’s. One is Dick Lattimer’s, date Oct 31, 1991. Above and to the right of the Bear Logo, signed on July 1992, Alice and Dick together spent some time with Carol and me. Nov. 1993 signed W.T. Buck with fire stick. Oh Yes, I remember, Dick had both Archery and Rifle season permits. The chance he would have liked in the archery season using the same ground blind, Dick reported the story, the buck was so close that the scope sight on the deer could only see hair and wouldn’t he have loved to have had the archery season extended one more day and have traded that 243 for his take down Bear.

November 1994,Buck with Muzzle loader. Dick again had both Archery and firearm deer permits but wanted to try a more primitive method to hunt. With a bit of instruction, some practice shots at re-loading, he took a stand with Carol’s 54 cal. Hawken rifle, adjacent a good trail at the bottom of a canyon. He killed his buck which was, like the year before, another when he wished bow season had still been in, about 10 steps from where he sat.

In 1964 and on into early 1965 when I first signed on with Bear Archery and worked with sales in Grayling, Fred and Kelly included me into catalog and promotional planning with the John Bonsib agency in charge of our advertising and catalog layouts. Tom Blee was assigned the Bear Account. Much credit of Bear’s growth and success of those years keyed on the theme of “Be a Two Season Hunter”. Dick Lattimer was assigned the Bear Account when John Bonsib retired and Tom Blee became his successor, as Dick has detailed in his books. Fred Bear was a great judge of people and he surely had a talent to hire the right people for Bear Archery.

So this wee morning hour, I do not grieve for Dick. He left us too soon and I wonder that I am now the last survivor of that old gang. Dick suffered much these past few years, and it quelled that wonderful boisterous laugh that I so remember and liked to hear. I do not wish him back for I know he wanted to move on and his faith and the record of his life and actions will be most pleasing to his reception before the “Great White Throne”.

I regret that I could not attend his final memorial tribute. I have been blessed to have had him for my foster Fred Bear Brother. I loved him, too.