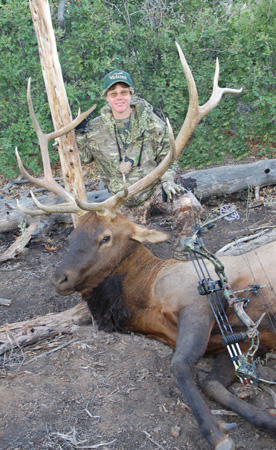 This hunt was different from our usual method of operation. Normally my wife, Shelby, is amiable to carrying a video camera while I hunt. But on this hunt I was carrying the camera – this was Shelby’s hunt.

To set the stage and give you some background about the hunt I’ll provide some details. Shelby had unsuccessfully applied for six years to hunt elk in the mountain range that abuts Las Vegas, Nevada to the west. Only one archery tag is issued per year. In her seventh try she was drawn. Her unit consisted of a mountain range perhaps 30-40 miles long and 5-10 miles wide; it’s a lot of dirt and we had it all to ourselves for the three week long August elk season.

The day before the start of the season we set up camp a couple of miles from where we planned to hunt. The camp was at about 6000 feet but we would be hunting a little higher. A friend of mine, Gary Gallegos, offered to go along with us and help out. He knows the mountains like the back of his hand and I knew that would be a tremendous help. Plus he has a strong back which would help in packing out an elk if we were successful.

Most of our hunting in the West is done by spot and stalk. We have found that you can tromp over the mountains and at the end of the hunt you have used up a lot of shoe leather and left your scent all over the country. We prefer to get in a high spot and spend hours glassing with 10 and 15 power binoculars mounted on tripods. Once we see a desirable animal we figure out a stalk and go for it.

For the first four days we alternated between sitting at the only waterhole within miles and sitting on a mountainside glassing. The waterhole produced some activity but no elk that Shelby wanted to shoot. We did see one beautiful mule deer with a 30” spread, but Shelby didn’t have a deer tag.

On day five we set up in a different area where we had seen some bulls the previous evening. Early in the morning we heard elk bugling and eventually saw several bulls on a nearby ridge top. One bull, which we deemed to be a shooter, ambled down the mountainside and into a timber stand at the bottom of the mountain we were on.

We moved quickly down the mountain and got to a place probably 200 yards from where we had last seen the bull. We couldn’t see the bull but thought he was bedding down and so we decided to wait until he moved. Our thought was a moving elk would make noise and help cover any noise we made in trying to close the distance. We waited and waited, eight hours in all in the hot August sun. At last we heard the bull get up and rake a tree.

We made our move. Slowly and quietly as possible, we got closer to the bull. He moved from the trees into an opening filled with chest high sagebrush. Shelby led the way with Gary close behind and I brought up the rear carrying the video camera.

Shelby moved into position for a shot but he moved further away feeding as he walked. And then the bull stopped for a few long seconds and presented a 40 yard shot. Shelby didn’t hesitate and drew her bow. She only shoots 42 pounds so the arrow slowly arched its way toward the bull. The arrow struck a little back of the bull’s lungs, most likely a liver shot.

The bull thundered off in a cloud of dust, circled and came back to look our way momentarily before running off again. We climbed up the mountain and through our binoculars saw the bull lying down 100 yards from where he was shot. He was still alive. Daylight was beginning to wane and we decided to leave the bull alone and return in the morning.

Early the next day we returned to see if we could find the bull. Overnight Gary recruited one of his friends to help us pack the bull to the truck. Now all we had to do was find him. It turned out to be an easy task. The bull had expired where we had last seen him.

After we celebrated, we examined Shelby’s bull. The arrow had stopped on the off side just under the skin. That says a lot for low poundage modern day compounds and cut on contact broadheads. She had taken a trophy most people would be proud of and it was her first elk. Later we had the bull officially scored for Pope & Young. He grossed 310” and netted 298”.

Needless to say we are still celebrating her big bull. My fear now is that on future hunts she will insist that I carry the camera and do the film work while she carries a bow.

Timber Valley Fresh Scents - From Our Does to Your Door