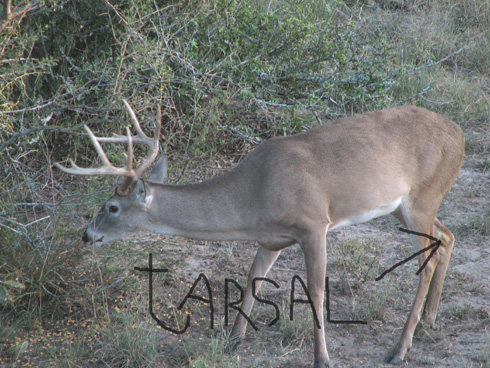 The tarsal gland is an important communication gland that both does and bucks utilize.

Even a novice hunter can identify the tarsal gland on the inside of the hind legs of a whitetail deer. Tarsal’s smell rank and seem to darken as the rut approaches. What does the tarsal gland do, what is its purpose? Are they the same on bucks and does? Do they signal the rut or are they just another communication outreach of whitetails? Fact is we know the answer to most of these questions.

When I first went gun hunting in Pa with a bunch of old guys, one of the topics I was barraged with was instructions on how to take my hunting knife and quickly remove the tarsal glands of any deer I killed. I was told that failing to carve these off a deer before I field dressed it would result in the meat being ruined. A bunch of folklore of course but I made tarsal removal job one when a deer went down. It was all horsepucky.

What the researchers at University of Georgia have discovered is that both does, fawns immature and mature bucks urinate on their tarsal’s year around. They all conduct the same hula dance, where they put their hocks together and rub the tarsal’s on one another while peeing down their leg. If that isn’t obnoxious enough the next step performed by all deer is licking the urine off the tarsal tuff.

Actually when a bucks tarsal gets real dark and smelly it is partially because he fails to lick the urine off and the urine reacts with both the tarsal gland secretions and unique bacteria that lives in this buck arm pit. This tarsal gland tuff has been compared to the armpit of a man where sweat and gland secretions mingle with human specific bacteria. Most guys I hang out with don’t urinate in on their arm pits but up to that point there is similarity. Both can really stink.

Under the surface, at the tarsal location, there are a series of sebaceous glands that secrete a thick buttery substance. This secretion is relative to that animal only but what the research did turn up was that the glands secreted about the same amount of oily lipid during every month of the year and there was no significant difference between bucks and does. Where it was thought that the gland secretions in bucks might have been increased during the rut, which would explained the amplified odor, just wasn’t happening. The ramped up smell is a just a result of more rub/urination cycles and the fact that the bucks stop licking up the urine.

As far as identification goes, it appears that this tarsal region is something like facial recognition software for whitetails. It is believed that the secretions are reacting to a bacteria bloom unique to this region and that when the bacteria/urine and secretions mingle they produce a smell unique to that deer. It may even be carrying dominance information, health data and sex. We even believe that does ID fawns via the tarsal odor fingerprint.

So imagine a buck rub/urinating over his tarsal’s next a scrape, He is likely saying; I’m here, it’s me, and I’m dominant. In that does also visit scrapes during the rut this is sort of a nightclub scene complete with yard signs.

I have long used a tarsal gland as a scent drag and now you see why it’s a good idea. I still carve them off my bucks. They go into a Ziploc bag and into the freezer. Another scent strategy I use is washing my hunting clothes in Sport-Wash. It leaves no smelly residue and gives me an edge when I’m out there with the best nose in the business.

For more go to: Atsko