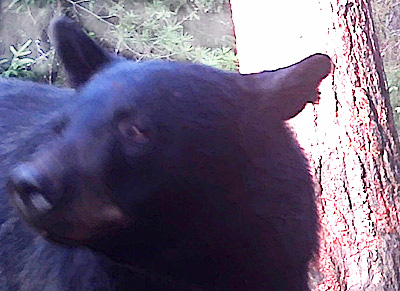 In the SpyPoint camera pics we see repeated daytime visits by a large bear with ears that slant outward rather than stick up straight. There was no way to know it, but I was gonna meet this bear today.

Besides being a large bear this bear is identifiable because of the way his ears are sideways rather than straight up. This picture shows you what I’m talking about.

When Fred Lutger and I arrived at the HorstTail site the logs that cover the bait were thrown all around. Fred refreshed the bait and I piled the logs on top of it. 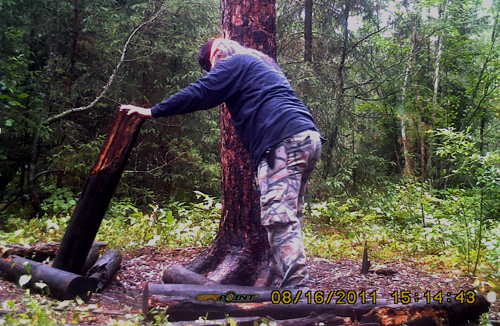 The picture below shows you my hunt set-up. You can see the bait logs on the ground and the Double Bull ground blind in the trees. The blind is 12 yards from the logs. Also between them you can see dirt. That is a hole in the ground and it is 7 yards from the blind. I put my own secret bear sauce in that hole. Then I used a stick to smear some Buck Stop Bear Lure on the logs and the pine tree. It’s hard to see but the SpyPoint camera is on the closest tree to the dirt spot.

Also worth mention is there are 3 pine trees close to and in front of the blind. I like that because if the bear walks behind a tree it makes a blind spot for him. And I can use that blind spot opportunity to draw my bow. Actually, that’s more of a deer hunting thing than for bear hunting. But I like to set up that way when I can. That said, Fred didn’t like the trees so close because they were a possible obstruction to his video work. 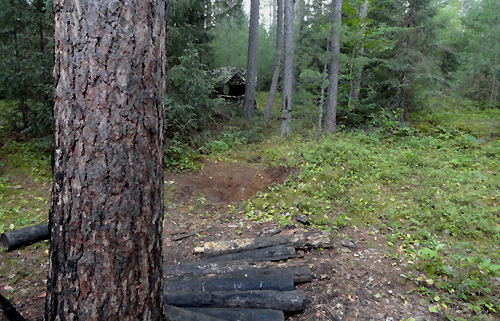 Here is a closer look at the SpyPoint game camera. When bears come around the logs they get their picture taken, day or night. 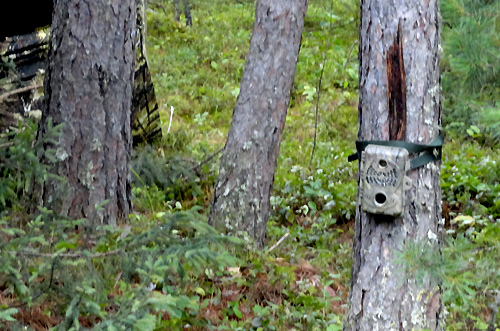 A little before 6:00 we saw movement of a black object back in the woods. It waited walked around about 60 yards away. It stood up twice to look the area over. 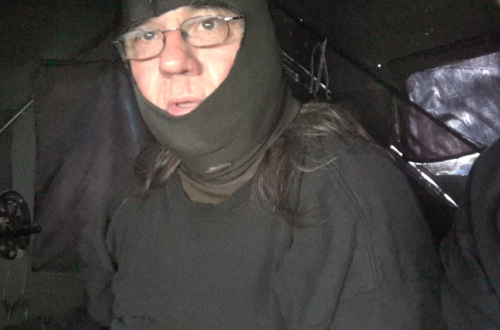 I put the Leupolds on him and recognized its ears. The slant eared bear was “in the house”.

Ten minutes passed and then the bear started our way. 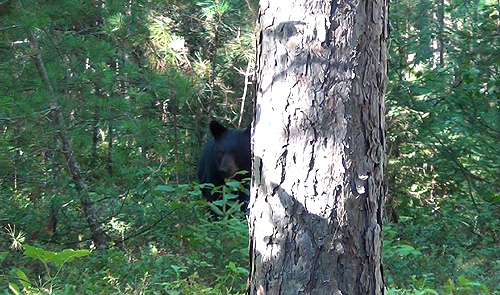 It came slowly but steadily. 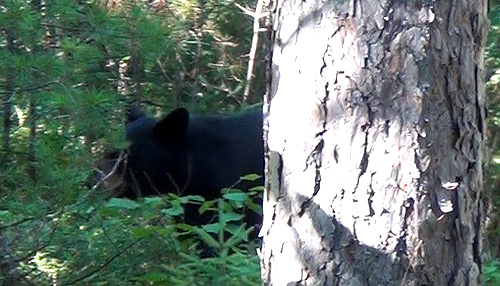 As could be expected, the bear was cautious. Silently he stepped past the 3rd tree in front of the blind. He was probably 8 yards now and focused on the bait area. 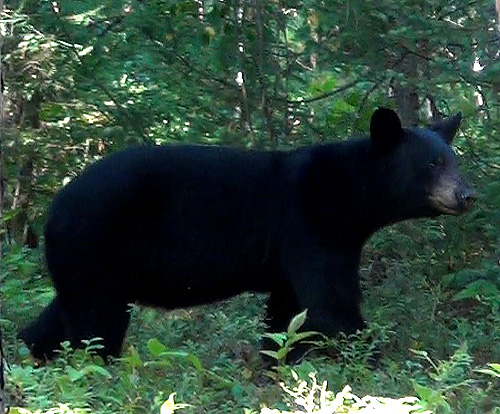 Woops, he changed directions and took a few steps back the way he came. 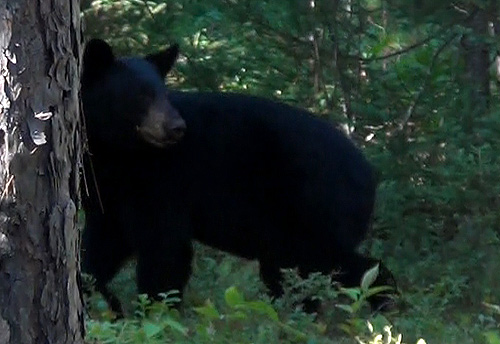 While it wasn’t impossible that things could fall apart right now, I was not worried about it. Over the years, I’ve seen dozens of bears do the come an go. I thought about drawing right now so I’d be ready when he started back toward the bait area, but hesitated. The slightest noise could send him off. And he was close enough to pick up on anything that went wrong. So I didn’t risk it. 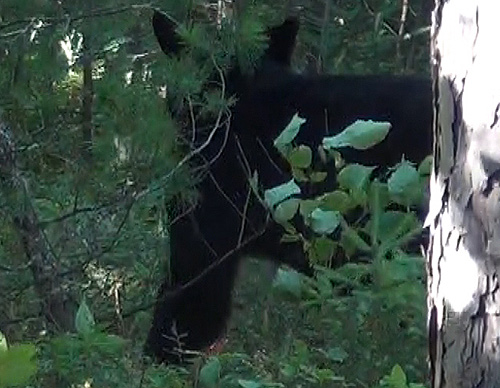 He turned back around and walked past the 3rd pine tree. 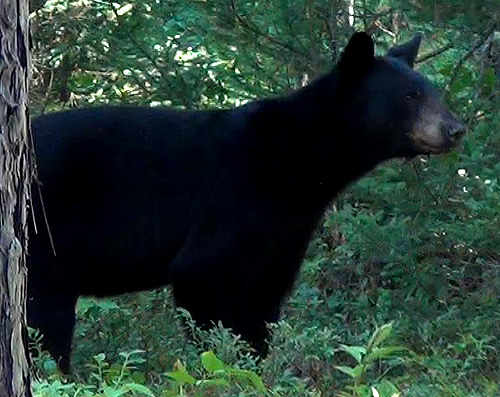 He dropped his head, probably smelling something, and continued on. 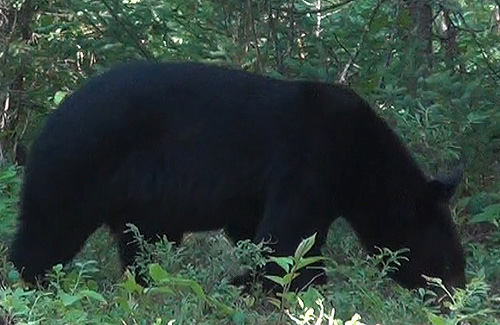 The sun light his coat up with highlights as he walked past the 2nd and 1st trees in front of us. I was totally ready to introduce slant ear to my Fireball. 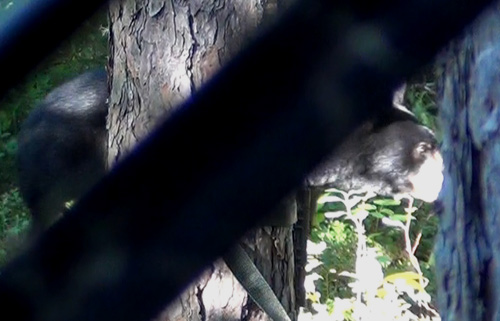 Even in the close confines of a blind Fred and I have different views of the same scene. If you’ve ever videoed with two people in a pop up blind you know what I mean. My view of the bear was perfect. But the 1st tree blocked the bear from Fred’s video view. He had to move the tripod to the right to get the bear on video at the bait. He raised the tripod and set it down where he could see better.

That made a slight noise. And the bear raced off like we set him on fire.

Another man might have been angry, and I know that’s true because I’ve had goof up happen when I videoed for people and some got real hot under the collar. But things happen. Having two people in the blind doubles the possibility of something going wrong. And it just did.

I hated it. Fred hated it. But it happened. There were no hard feelings either way. And that’s one of the things I like about hunting with Fred. He is a true friend.

We settled back and waited. It took two hours for something to happen.

Timber Valley Fresh Scents – From Our Does to Your Door

Timber Valley Fresh Scents - From Our Does to Your Door