by Stephanie Mallory
in Bowhunting Posts
0 0
A A
0 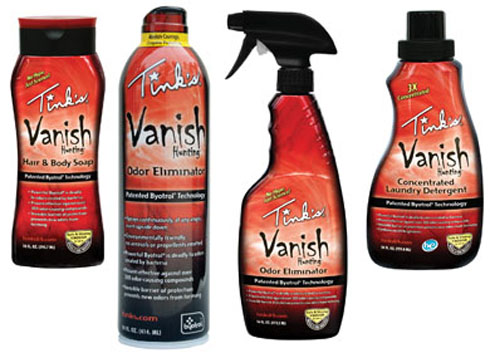 It’s no secret, deer are spooked by human odors. But did you know many of those odors are actually caused when bacteria feed on sweat and emit waste? So in order to be effective in the deer woods, you must eliminate bacteria.

According to recent tests conducted by an independent lab facility, Tink’s Vanish Hunting with Byotrol Technology is the most effective at eliminating bacteria. In fact, it ranked #1 by destroying 99.9997% of the odor-causing bacteria. In addition, the laboratory performed another experiment designed to determine how well the products tested prevented the growth of the bacteria. Tink’s Vanish Hunting with Byotrol Technology was determined to be the best product tested, while three of the five other technologies tested either didn’t perform at all or produced disappointing results.

Antimicrobial Test Laboratories, an FDA-registered, EPA-compliant independent testing facility, located in Round Rock, Tex., conducted the tests. S. epidermidis, which is one of the most common bacteria found on skin, was used as the test microorganism.

Dr. Ben Tanner, a scientist with ATL Laboratories, says, “As we all know, odor control is important for hunting, and most odors are caused by microorganisms. If we can minimize the growth of germs, then we can minimize that odor. Tink’s Vanish Hunting with Byotrol Technology does just that. For every million germs, this product reduced that count to one. If you already have bacterial growth on your body, especially during a hot day, an application of Tink’s Vanish Hunting with Byotrol will reduce germ numbers quickly and substantially.”