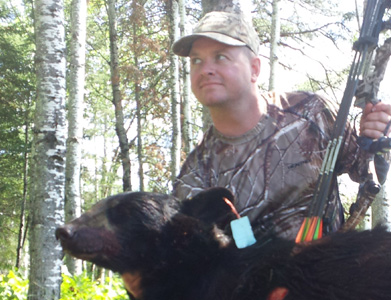 Travis Litteken listened as Robbie Cramer told everyone that a bear walked in while he was baiting on of the hunting sites. The bear disregarded Robbie and went straight to the bait. So after his uneventful hunt the same afternoon Robbie asked him is he wanted to set up where the bear had come in. Travis said “sure”.

It was a decision he would remember for a long, long time.

After breakfast the next morning Travis and Randy went with Robbie to the area. Travis brought a climbing ladder and his treestand. He strapped the ladder to a birch tree and pulled up his treestand. When he strapped the stand around the tree he heard Robbie say, “BEAR”!

Randy was carrying the bait bucket, he looked around and saw a bear walking toward him. He set the bucket down and backed away. The bear walked right to the bait bucket.

Before starting up the tree Travis had laid his bow on the ground. Robbie Cramer picked it up and handed it to him when he got to the ground. Travis hurried to get his release on as the bear grabbed a chunk of meat and hurried away.

But the bear did not stay gone long, in less than a minute the three hunters saw it coming back. It passed right by them, close too, only 5 yards away. Randy pulled a sapling Pine tree back out of the way so Travis had a clear shot. Travis drew and noticed that all his sight pins were on the bear, it was that close. He took his 5 yard shot.

The bear ran and went down 35 yards away. It was over.

Travis Litteken is from Troy, Illinois and is a tool maker for Boeing in Saint Louis.

Here is Travis on video, telling us all about his exciting bear encounter.

Chef Klaus - Recipe For A Bear