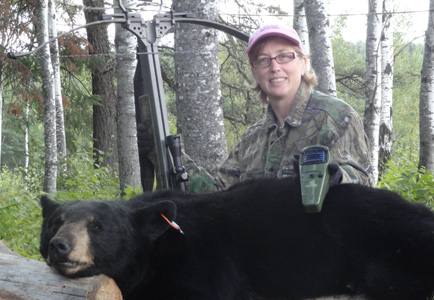 Yesterday afternoon Joelle went to her Double Bull ground blind with her young son Jack. (Joelle is hunting, Jack is hanging out.) She started her ThermaCELL and in short order it ran the mosquitoes off. After four hours they heard a branch snap in the dense woods. Jack checked his watch when they saw the bear, it was 8:02.

The bear eased over toward them and then walked back into the woods. And it continued to go in and out. At 8:30 the bear came up on the right side of the bait logs and turned broadside. This is what Joelle was waiting for and she, “Got the shot.”

Like a hairy, black rocket, the bear zipped into the woods. Joellle heard a loud crash nearby but not a death moan.

Morning came the next day and we went to recover the bear. We followed a roadmap blood trail for less than a minute and came to the bear, a big one.

Kirby loaned us a big stretcher to carry the bear out on.  Four of us grabbed a corner and heaved to. It was a real chore to get the heavy bear out to the pickup.

And here is Joelle on video telling us all about it as we recover her bear.