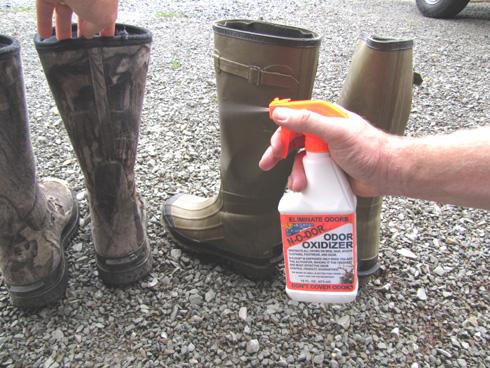 I spray my boots exterior with N-O-DOR before each hunt and also dust the inside with N-O-DOR II Powder. Don't overlook this important step in scent suppression.

The University of Georgia is deer research central. A few years ago I was there working on a whitetail project that dealt with managing urban whitetail deer and had an opportunity to tour the facility and spend time Dr Bob Warren, who heads up the program. His associated, Carl Miller is another foundational person at the U of G who is pivotal in the research done there. I often see both of these men at the S.E. Deer meetings and learn of whitetail research they have conducted. Graduate students who are working under their direction usually give the papers. Much of the following information was gleaned from their work.

Have you ever sat in your treestand and observed a deer pass by and then two hours later another deer comes by and intersects the same trail and stops to smell the tracks of the earlier deer. I bet you have. This has happened to me hundreds of times and it always raises the question, “What do they smell and what information could they have gotten from the tracks?”

There is now solid research that sheds more light onto the answer. The key is a scent communication strategy used by deer that relates to the interdigital glands located up between the split hooves of deer. Up there where we would find “toe jams” is a tiny haired, gland fed sac that is filled with a yellow pasty fluid. The paste has a strong odor and is believed to be the fingerprint of that particular deer.

Every time a deer takes a step, his hooves splay open slightly and a minute bit of this scent is left in the print. The U of G testing determined the makeup of the substance being emitted from the interdigital gland. They found a variety of volatile fatty acids. Fatty acids are a byproduct of fermentation and are normally found in the lower intestine. The fatty acids are normally absorbed to provide energy but here they were serving a unique role as scent indicators.

The word volatile here means that the substances readily evaporated into the air at room temperature. In a sense there were aromatic. What made the find even more interesting was that they discovered at least 35 of these volatile fatty acids associated with the interdigital gland. A few years later, a researcher by the name of Jon Gassett conducted a more sophisticated set of tests and discovered at least 46 separate volatile fatty acids.

These great velvet bucks are following their nose from the time they were born until you draw on them. They use that nose to gather info from trials. A unique set of fatty acids emitted from the interdigital gland offers them key info. They can also smell you. Like this sad moment, make a mistake and they leave.

The key here is the next bit of info. These fatty acids evaporate at different rates and may even carry information about deer behavior. If they dissipate at different rates that means they could be used by a deer to determine a number of valuable factors. Such as, the time elapsed since a deer had walked this trial and possibly, the direction of travel. Both are likely.

Taking it a step further, the new research showed that there were about 5 VFA’s that were uniquely associated in greater amounts with dominant bucks. Extending this over to scraping behavior, we have to ask if these VFA’s are an important part of the scent marking that is occurring at ground level during the scrape making process. This also makes me curious about what is going on the ground when a doe is foot-stomping me? It has to be bad.

Learning that a whitetail’s sense of smell is so acute as to smell individual fatty acids, left in a track is mind-boggling. The amount of this substance left in the track is measured in parts per million. In addition, to think that they may be able to differentiate between an older track and a fresher one to determine direction of travel is another mind blower. In short, they see with their eyes.

When we are out there in their woods, it is critical to remember that we must try to avoid their trails and path of travel, as they can smell where we walk as well. They are using bacteria laced exfoliated skin cells as the indicator for us but what can we do to minimize out scent presence?

One thing is to rely on a scent eliminator spray that uses science to reduce human odor. My choice is Atsko’s N-O-DOR Spray. It alone uses the science of oxidation to eliminate human odor. Another strategy I use is N-O-DOR II POWDER, which uses the science of adsorption to attract and hold odor, permanently locking odor up. Abscents® crystals are a molecular sieve of alumino silicate molecules. The crystal framework of aluminum and silicon atoms forms a three dimensional network of internal cavities having a honeycomb-like structure. The crystals have a tremendous surface area. One teaspoon has an internal surface area equal to that of a football field. I use in my boots and dust my camo with it while storing in a tote.

This huge surface area is available for the absorption of odor-causing molecules. What sets Abscent crystals apart from others is that they are hydrophobic (water hating). This means they maintain their odor-absorbing qualities in high humidity or even when soaked in water. This is especially important because high humidity or wet days amplify a deer’s ability to smell you.
So there you have it. The whitetail’s nose is amazing and they are using some high tech strategies to communicate via scent glands. It is our job to make sure they aren’t communication about us.
For more go to: ATSKO

Fire On The Hill

Are Whitetails Strange or What?