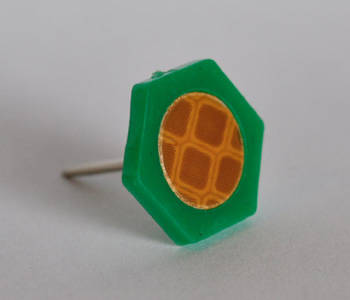 GeoTacks are used to mark trails, camp sites, landmarks or other locations during low or no light conditions where they brightly reflect the light from a flashlight for easy visibility. Each tack is earth colored, re-usable and eco-friendly in that they will not harm trees or spook animals and they do not pollute the environment.
GeoTacks are a second generation reflective marker of the popular, patented FireTacks HotDots introduced in 2002.

FireTacks were lab and field tested to be the highest visibility, most reflective multi-directional and longest lasting trail markers available. This was proven in lab testing at 3M Company in 1999 and with field testing and certification by the North American Hunting Club in 2001.

While FireTacks® are three dimensional with a visibility of approx. 270 degrees, GeoTacks™ are a Flat Tack with visibility of 90 to 100 degrees which make them easier for hiding your trails from anyone but YOU.

WildTech President Linda Burch described the advantages of GeoTack, “There are three ways GeoTacks work. First, the base tacks are either Black or Woodland Green so they blend into the woods like camouflage. Second, the reflectives are WildTech’s trade secret Stealth Bright, totally hidden by day and super bright at night when hit with a flashlight. Third, GeoTacks are multi-directional which is a good feature when there is the possibility of other hunters discovering your tack trails as they can only be seen reflective wise from directly in front.”

GeoTacks are reusable and last for years. The reflectives are warranted (by 3M) to stay bright for up to ten years or more when left in the woods year round and even longer if you take them down year to year. No fuss, no muss, no batteries, no pollution, no hassles.

GeoTacks are valuable to hunters, but they have many other applications too, like Geocache or night activities like Paintball or night snow shoeing.

“Your Way In, Your Way Out” has been the FireTacks motto from back in 1999 to the present. FireTacks products are made in the USA. After 11 years of being proven in the field, FireTacks® have earned their position as being “the Brightest and the Best”. GeoTacks™ continue that tradition.

For more information go to: www.firetacks.com