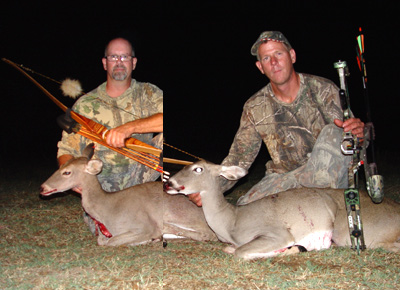 Deer lease member Robbie Beckwith arrived Friday at noon. He hunted at the back of the lease and saw one forky buck. Saturday morning he returned to the back and didn’t see anything. His guest Charlie arrived during Saturday night. Saturday afternoon Charlie hunted Myron’s Corner and saw 7 deer and shot one doe with his home made longbow. That’s Charlie in the picture below. 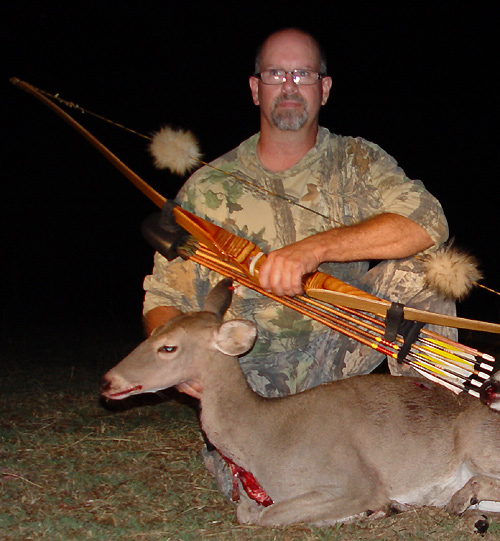 Robbie Beckwith was at the “L” and saw 6 does and shot one. Both Robbie’s and Charlie’s deer went down right away. The picture below is Robbie. 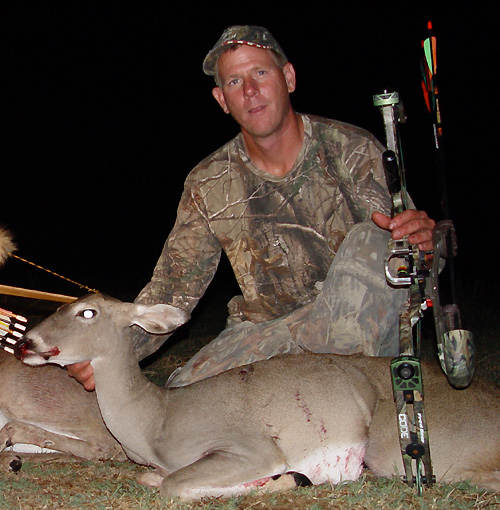 Sunday morning it was raining hard and they didn’t go out until 9:30am. Charlie zipped at the “L” but he saw 14 hens and a longbeard gobbler.

Robbie went to Myran’s corner and saw a 4 point, a 7 point and a mature 8-point. He passed on the 8-point and saw 2 more does.

Sunday afternoon Charlie returned to Myron’s Corner and zipped. Robbie counted 15 does and decided to shoot. He waited for a shot at the largest doe and when it turned broadside at 18 yards he took his shot. The doe went 18 yards.  (Somehow I wound up without a picture of Robbie with his second doe.)

Donald Duck arrived Saturday during the day. He didn’t see any deer Saturday and Sunday.

This weekend the landowners came down and everyone went to their ranch house to cook and eat fresh venison back strap. Our host Alex Alexander is a master chef when it comes to Chicken Fried Venison Steaks with his savory venison gravy and mashed potatoes.

We ate a small mountain of Alex’s delicious venison steaks doused in his perfect brown gravy. This is something we used to all the time in past years and it was great to do it again.

Here are some pictures taken from a phone.

If that ain’t what it’s all about I don’t know what is.