by Robert Hoague
in Bowhunting Blog, Deer, Wild Hogs
0 0
A A
0 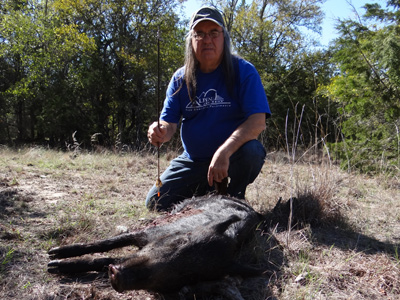 This afternoon it was Hammer Hole time. The last couple of times I hunted there this October I didn’t see anyting. But this is a good place and it’s just a matter of time before something happens.

I got into the new ground blind at 4:30 and waited. It was cool for a change and very peacefull. About the time it looked like this was another no-seeum hunt a big, solo, solid black wild boar came out of the edge of the woods ahead of me — it’s 50 yards to the woods edge. I turned on the rheostat light on my bowsight.

The boar crossed into the nearby woods to my right and I could see it rooting around in the ceder trees. Twenty minutes later a group of wild hogs came through the same woods and some of them walked out into the old, grown over woods road by my blind.

A big black and grey spotted hog looked good and when it was broadside I drew and put my pin on it. The hog turned and the angle was no longer good and I let down.

A black hog came out and the two hogs had a scuffle that ended with the black hog standing broadside 24 yards away. I drew.

When my bright green pin settled on the vitals behind the shoulder I released the arrow. The hit was good and the black hog turned and ran into the woods 50 yards away. The other hogs scattered as well.

I didn’t want it to get dark, and I felt that my hit was on the money, so I went after it right away. A few steps down the trail the hog had ran to and I saw it up ahead, lying in the trail. I gutted it and iced it down and took a picture first thing the next morning. 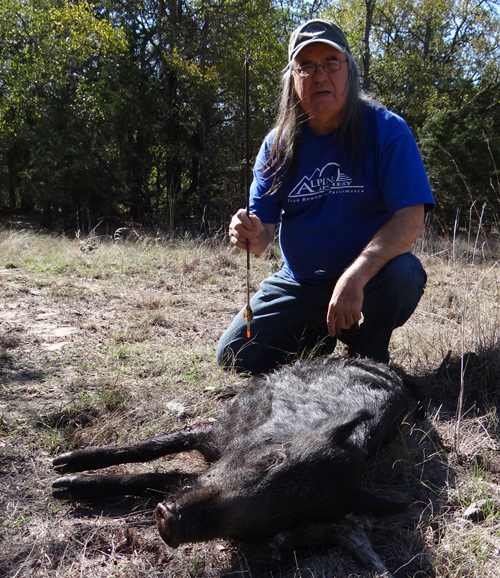 My Alpine Fireball is everything you could ask for in a hunting bow. Bob Proctor has really done it right with this fine bow. It shoots with consistent accuracy shot after shot. This year for turkey season I set the bow down to 58 pounds. The bow still had plenty of power and shot very flat. So I left it at that poundage. And it is working great. The Fireball sent my arrow right where I was aiming and then slammed it through the fat wild hog. And it was over in 70m yards. The Fireball is quiet, in fact it is absolutely the quietest bow I have ever shot. This is a great bow.

I used the one they call Whitetail Special. It has a 2-inch cut. Grim Reapers shoots and groups like my field points too.  Grim Reaper broadheads have proved to be tough and accurate on hogs, deer, wild turkey and bears. I like that a lot.

This year I got a pair of Leupold binoculars, the Mojave binocs. They are the 10 x 50 model. I like the 10 power because it gives me a larger image and its the biggest size I can hand hole. The field of view in these fine binocs is amazingly clear, edge to edge. They work great in the thick woods.

I have 3 different SpyPoint trail cameras. They quickly let me know what was coming to my hunting areas. And even more importantly, what is coming during daylight hours.

At the ATA Show in January I learned that all living beings constantly produce electromagnetic EMR energy waves. When you are excited you generate more and this energy spike can be picked up by animals and tip them off to your presence, because scientific research proves that game animals can sense changes in their EMR environment. HECS clothing blocks 90% of your EMR. So I ordered a set. It appears to be helping out.

My carbon arrows were the V-Force from Victory Arrows. They shoot true and are tough. Their fletching is the Omni Vane from Goat Tuff Products This vane is perfect for bowhunting. My arrow rest is the Whisperflite Fall Away rest from Alpine Archery. It produces accuracy shot after shot. The Bowquiver is the 5 arrow model from Alpine Archery that can be removed from the bow in the stand, if preferred. The Peep is the Whisper Peep and it has vibration dampening material that makes this quiet bow even quieter. The bowsight is a BoomSlang from Cobra Archery. It was easy to sight in and the bright fiber optics show right up, even in a blind that’s so dark inside a deer or hog can’t see you in it.

Every time, the last thing before leaving for the hunt I took a shower and used ATSKO Sport Wash to get totally scent free. It does the job. Beside the HECS pull over shirt and pants I wore black Cargo pants (with plenty of pockets) and a Long Sleeve T-shirt, both of which I bought at Wal-Mart. Plus I used a black face mask that I made. And my black Alpine Archery cap topped it off.