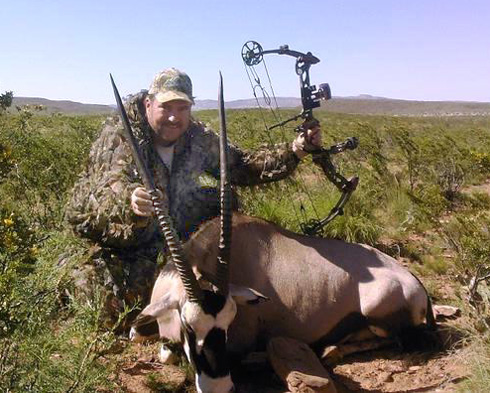 Opening day finally rolled around and I started at the lower end of the range. I passed up a lot of oryx in open areas and just kept moving along. I was looking for this habitat I had pictured in my head from all of the strategizing from the year before. Another friend of mine, Tim Farmer, had accompanied me on the hunt. Tim had been along with us in previous years to enjoy the hunts and help pack out the animals. Tim and I discussed numerous locations that we had seen in previous years, and decided to head back down off toward “Lefty” country and see what we could find down there. We were getting close to feeding time, and we needed to find a good creosote flat to watch.

As we headed down the canyon, I spotted a flat that meet my needs, we stopped and started glassing, Within 5 minutes, I spotted a tremendous bull headed into the flat to feed. He was about 300 yards off, and I had good cover to get within 150 yards of him real quick. The wind was right, and no other oryx were in sight. This was going to be a good test of my new strategy. I grabbed my Alpine Silverado and my Montana Decoy Moo-Cow and off I went. 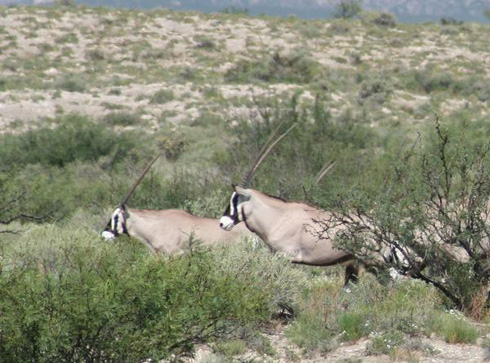 Gemsbok (oryx) free range but never easy to get into.

I closed the distance to 130 yards in about 5 minutes. The bull was feeding away from me and moving up on him was fairly easy. As the gap closed, I slowed my pace. If he continued to feed away from me I could just keep moving up on him and perhaps close the distance to a comfortable shooting range. I worked him for about 15 minutes, getting within 80 yards of him. Then, for no apparent reason he turned and headed up the side of the hill. He stopped at 100 yards. I drew and held for the wind to give me a slight break so I could release the arrow. The wind continued to blow harder until the bull turned and walked off. 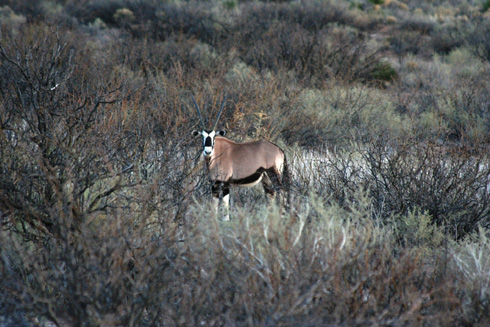 I gathered my stuff and headed back to where Tim was. The stalk had not worked out but it had not been blown either. All we needed was another flat and another bull and we could give it a go again. We were headed off into some country with plenty of creosotes so I was sure I would get at least one more chance before the day ended.

We headed out of the hills and down into the flats. As we made our way through the first little valley, Tim mentioned Lefty and the ‘mine field’ from the year before. We were coming up on that hill and we sure did not want to forget those cluster bombs.

As we headed off of the other side of  ‘Cluster Hill’, I could not believe my eyes. In the exact same spot as the year before, there stood a single oryx. I raised my binoculars to take a look at him. Could it be? As he turned his head to reveal half of his left ear missing it was confirmed, it was Lefty. Not a second of hesitation on my part. I raced right back around that hill and headed to the bottom. The rattlesnakes would have to just deal with me this time. I got around the hill as fast as I could, placed my Moo-Cow about half way up the side of the north hill and headed for the middle of the creosote flat.

Once I found adequate cover I rose up slowly and started looking for horns. Within a minute I found him and he was close. I moved to an area that was slightly more open where I would have more shot opportunities, turned to look and realized he was right on top of me.

I was standing less than 15 yards from him and the only thing separating us was a single creosote bush. All I could think was ‘please Lord, don’t let him see me and decide to run right through me’.

He stepped closer, coming within 7 yards of me. My heart raced and I was beginning to wonder how much this little encounter was going to hurt! As he reached the bush between us, he turned and started to feed toward the hill to the south and away from my decoy. The brush was thicker in that direction and if I was going to get a shot at him I was going to have to get it before he got out of the bottom of the valley.

I started following him through the brush, staying about 25 yards behind him. I had him at good shot angles a number of times but could never find a path through the brush for my arrow to fly without a chance of obstruction. He reached the edge of the brush and started up the hill. It was now or never. A single yucca stood on the hill. I quickly ranged it at 80 yards and he was headed right for it. I got ready to draw as he approached it. I really needed him to stop.

Like a plan straight from heaven, he reached that yucca and looked back. When he did he saw my Moo-Cow across the valley and turned to get a good look at it, giving me a perfect broadsided shot. I waited until he turned his head and looked up the hill over his other shoulder, drew and let my arrow fly. His attention to the decoy and that yucca was so intent he did not even hear the arrow leave the bow. I heard the arrow rip through the bull. He lowered his head, stepped sideways about 10 steps and piled up on the ground. I dropped and waited, making sure not to scare him up. I had all evening and sure did not want him moving before he had a chance to expire. I could see the entire hilltop and hear everything. If he got up I would know. If not, I wanted to just let him be.

I waited 15 minutes and rose up slowly to take a look. There laid Lefty, stretched out and expired. I slowly walked up to him to confirm the kill and then headed back to get Tim. We had a lot of work to do to get this magnificent 500 pound animal cleaned up and on ice. The temperature was near 100 degrees and it was not going to get any cooler. I picked up my arrow, put it in my quiver and walked back around the hill. I didn’t say a word when I walked up to Tim, I just smiled. He grabbed the arrow, took a good look at it and said, “It’s like déjà vu all over again …. Except this time we’re taking Lefty home”!

I would have never imagined in my wildest dreams that we would see the same bull, in the same place, at the same time of day as we had see him a year before. Game animals are creatures of habit, and sometimes we may not truly realize just how habituated they can become. A thought to keep in mind for future hunts for sure!
God Bless each of you in your hunting adventures. Remember, every blessing in your life comes from Him!

For the best in archery equipment go to: Alpine Archery 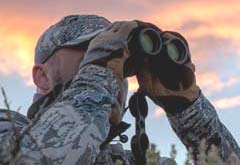 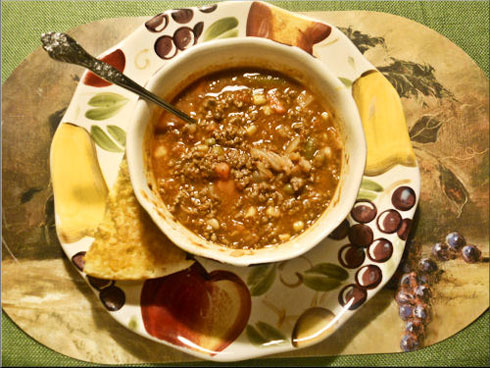 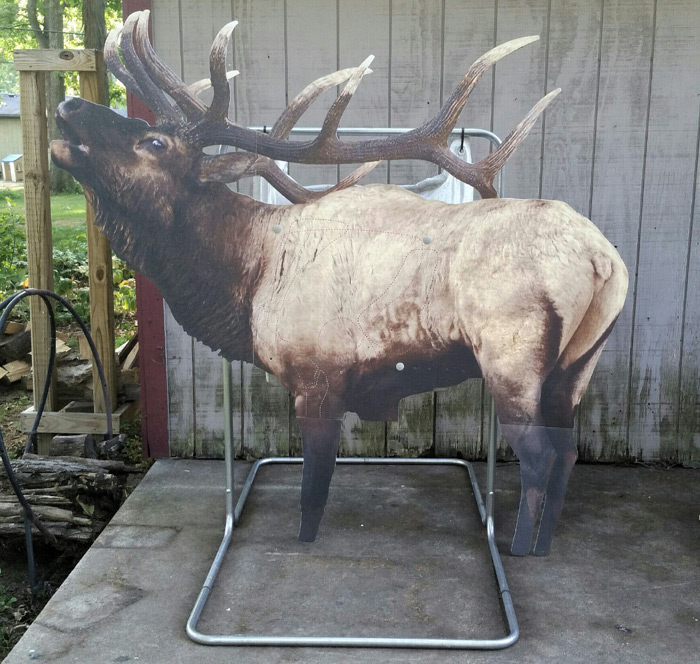 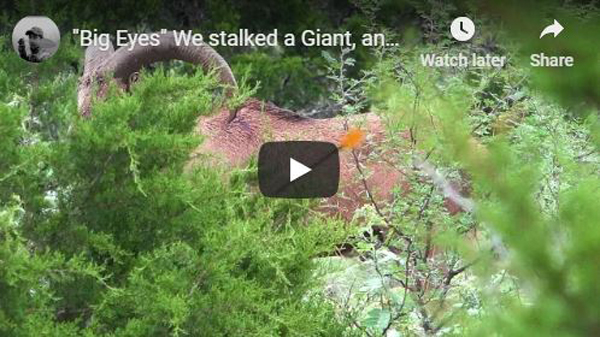 ‘Big Eyes’ We stalked a Giant, and then….SLOCK