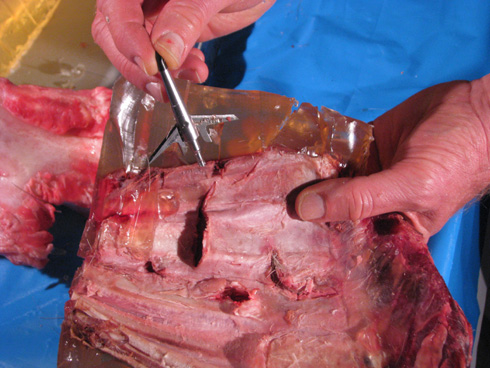 Only one mechanical came through the testing with no loss of cutting blades, reliable integrity and most tissue cut.

Deer season is here. I spent two days last week trailing wounded deer that friends shot. We didn’t find either one. I’m not suggesting that either deer died and was lost but it is a fact that many deer are unrecovered but they recover from the shot. It is the nature of the bowhunt.

Some research I conducted last winter offered some explanation concerning a possible reason why so many deer are not recovered after a hit. It boils down to two factors. Poorly designed mechanical heads (integrity) and hunters who don’t understand the importance of choosing a broadhead that will offer you the maximum amount of cut…Total Cut.

Here is what I discovered during my testing which was conducted at PSE’s shooting lab in Tucson AZ. We shot 10 or more mechanicals into various targets to test for broadhead integrity. Broadhead integrity is paramount. It is a non-negotiable factor. What we learned was that a surprisingly large number of mechanicals failed reasonable tests. Blade loss was the result.

Most surprising was the mechanical with the most aggressive marketing campaign failed most often. You know this head well. It touts that it’s blades open on impact with a slip-cam design. Well, in most cases the blades did open upon impact, then a blade would be lost during penetration. Once a blade was lost by this mechanical while penetration a panel of green deer hide, an inch of ballistic gelatin and then a panel of doe ribs. I found the blade on the outside of the deer rib in the gelatin. Go figure. This test result would result in a field loss of an animal.

Unlike the slip-cam model, most broadheads did retain their blades through much of the testing. Most failed on at least one of the tests. One broadhead never lost a single cutting blade after 5 days of shooting through steel drums, plywood and cow shoulder blades. That head was the new Swhacker mechanical. It was by far the toughest mechanical broadhead I’ve ever tested.

The other factor that can result in poor recovery rates are broadheads that cut only a small amount of tissue. It is common for many bowhunters to be enamored with a broadhead that gives them a pass through and then sticks 12 inches into the dirt on the far side of the deer. They think that this was real performance. Well, it is foolish performance t best. Broadheads kill by hemorrhaging and hemorrhaging is the result of tissue cut that contains blood vessels and arteries. An arrow has a specific amount to kinetic energy that it carries to the target. If it is able to pass through the animal and still have enough kinetic energy to stick into the ground a foot, then you wasted a lot of kinetic energy penetrating dirt that should have been used to cut tissue. This is clearly demonstrated in a video clip up on bowtube. For video: CLICK HERE

During our testing regime, we shot a variety of broad tipped arrows into a block of military spec. ballistic gelatin. We measured the distance the broadhead penetrated and multiplied that distance by the width of the cut. This is total cut. It is all that matters. In short this is the amount of tissue that broadhead will cut while expending its kinetic energy.

If you shoot, a fixed blade that cuts less than 2 inches but you get a pass-through you still failed the test, because you left unused energy on the table. Out testing is not rocket science but it is broadhead science. In this case, the proof is in the jello!

What’s in your quiver?
For more go to: Swhacker Broadhead